Guam Football Association is a not for profit, non-stock association organized in compliance with the laws of Guam. The Association is organized and shall be operated exclusively for charitable and education purposes as specified in Section 501(c)(3) and as qualified amateur sports organization under 501(j) of the Code. Read the full GFA Statutes here.

The Guam Football (Soccer) Association was founded in 1975 by a group of men who were looking to establish recreational football in Guam. A few years later, military leagues sprang up for youth teams, and a youth division of the Guam Football Association began to emerge.

Communications began with the international federations and eventually, Guam became and associate member of the Asian Football Confederation (AFC) in 1991. Guam worked hard to develop its association, and in 1996, was recommended to full membership in the Federation Internationale de Football Association (FIFA). At the FIFA Congress in Zurich in 1996, Guam was voted in as a member of FIFA, therefore, attaining full membership in the Asian Football Confederation. In 2002, former President Richard Lai was one of the founding members of the East Asian Football Federation, the continent’s 10-member federation with also includes China PR, Chinese Taipei, DPR Korea, Hong Kong-China, Japan, Korea Republic, Macau-China, Mongolia, and the Northern Mariana Islands. Guam’s national teams consistently compete in the EAFF’s biennial flagship tournament now known as the EAFF E-1 Football Championship. The tournament consists of three rounds – Round 1, Round 2, and the Final Round.

For many years, and since its induction as an associate member in the Asian Football Confederation, Guam has participated in U14 festivals and tournaments, U16 tournaments, U19 tournaments, the Women’s Asian Championships, Challenge Cup Qualifying Events, World Cup Qualifying Events, and Club Championships. Guam also participated in the East Asian Games, which are held every four years. As the sport of futsal began to gain popularity, Guam also has organized national futsal teams to compete in international tournaments.

Guam, an island in the western Pacific with a total mass of 212 square miles and a population of approximately 180,000, Guam has had varied success in its international endeavors before 2012. The Guam national teams have consistently shown improvement, and have not been discouraged by the football strength of the island’s regional neighbors. It is understood that in order to move to the next level, regular international competition is necessary. 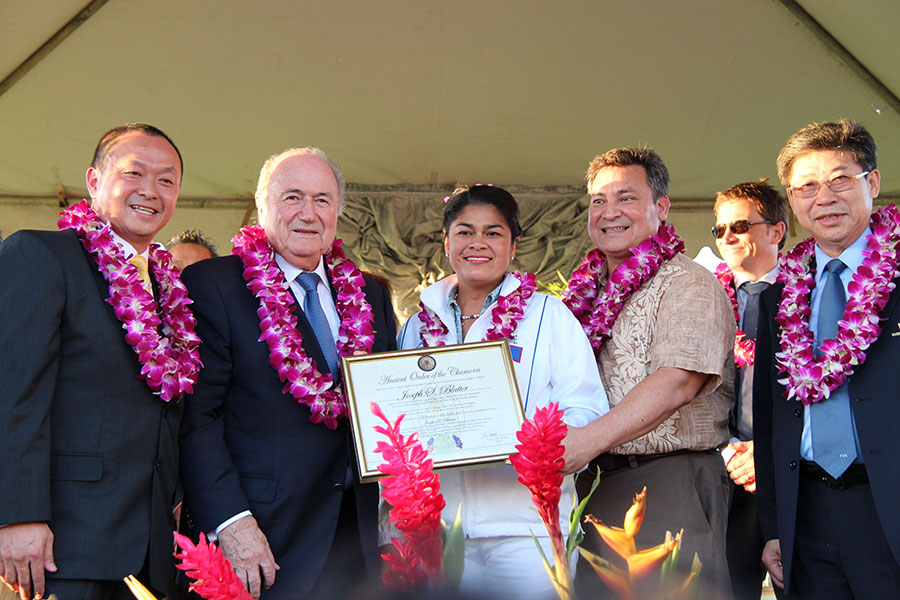 To assist with development of Guam’s national teams to prepare for regular international competitions, Guam Football Association has forged relationships with regional neighbors for foreign coaches. A great deal of assistance is provided by FIFA, AFC, and EAFF in that regard, with a number of seminars and training sessions for all involved. Additionally, assistance from other member nations of the EAFF, such as the Japan FA and the Korea FA, have helped elevate Guam’s international football status.

In 2003, JFA sent one of its licensed coaches, Sugao Kambe, to Guam to help steer Guam’s young national program, as it was faced with many challenges after having just joined FIFA in 1996. Coach Kambe worked with Guam’s national team and youth national teams, developing structure in the program that has molded a handful of GFA’s coaches, including Dominic Gadia, currently Guam’s lone homegrown AFC “A” Licensed coach on the pathway to attain full AFC Instructor status.

After Kambe’s reassignment to another location in Asia, JFA assigned Norio Tsukitate to continue assisting with Guam’s football development in 2005. Coach Tsukitate spent six years in Guam, assembling a fairly strong national team that won its first-ever match against a FIFA member nation in 2009, a 1-0 victory over Mongolia in that year’s EAFF preliminary competition. The team later battled to a 2-2 draw with Macau that secured its qualification to the semifinal round of the tournament for the first time.

In 2012, the Guam national program fell under the purview of England’s Gary J. White, who also held the title of Technical Director. White previously had been at the helm of the British Virgin Islands national team and the Bahamas national team. He also served as technical director for Washington State Youth Soccer and was a development consultant for the Seattle Sounders organization, a professional club in the MLS. Under White, the Matao, Guam Men’s National Team, made its most successful run in FIFA World Cup qualification, finishing Round 2 Qualifiers with a 2-5-1 record. Guam won its first qualification matches at the GFA National Training Center on June 11, 2015 against Turkmenistan and June 16, 2015 against India. The team’s draw came against Oman, ranked within the top 100 in the world, on Sept. 8, 2015, also at the GFA National Training Center.

For elite youth athletes, the Guam Football Association technical department introduced the National Academy, a program which was designed to place the young athletes in elite environments for additional training. Over the years, with the growing demands of youth soccer athletes transitioning to elite levels, the program was later replaced by the GFA Center of Excellence in 2018, providing a more holistic and modernized approach to building an overall culture of success. Youth athletes in the U9, U10, U11, U12, and U14 age groups try out annually for spots in the program. In 2020, the Center of Excellence program was canceled in favor of the new Elite Selection teams, with youth athletes trying out for a spot on the boys or girls teams. The Elite Selection teams are slated to compete in at least two international matches in a year. From there, the best athletes matriculate into youth national teams that compete internationally in AFC and EAFF tournaments. After moving through the national program, some may receive a call-up to the senior men’s team (the Matao) or the senior women’s team (the Masakåda).

In 2017, Australia’s Belinda Wilson took over the role of GFA Technical Director, while also taking over the women’s national program as head coach of the Masakåda, Guam Women’s National Team. Wilson joined GFA with previous experience as the AFC Women’s Football Director and head coach of Brisbane Roar Women’s team, which competes in the Australia’s top level, professional W-League, among other qualifications. At the tail end of 2017, GFA announced that Karl Dodd, Brisbane Roar’s High Performance Manager and former head coach of Western Pride FC’s senior men’s team in Australia’s National Premier League, had been appointed as the new coach of the Matao, Guam Men’s National Team. Following Dodd’s departure in 2021 due to a family emergency ahead of the FIFA World Cup Qatar 2022™ and AFC Asian Cup China 2023™ Asian Qualifiers, Korea Republic’s Suh Dong Won was tapped as Head Coach of the Matao for the remainder of the Round 2 qualification.

In October 2021, Sang Hoon Kim was appointed Head Coach of the Matao, Guam Men’s National Team ahead of the playoff round of the AFC Asian Cup 2023 Qualifiers.

In July 2022, Ross Awa was named Director of the Women’s Program and Head Coach of the Masakåda, Guam Women’s National Team, after Ogura’s resignation and departure from Guam in May 2022. Awa also took the helm of Guam’s first Women’s Futsal Team that competed for the first time on the international stage with a pair of friendly matches against the Philippines in Manila in October 2022. The team won its first-ever international match 1-0.

GFA’s natural development moved forward with the increasing financial support by FIFA, AFC, EAFF, local business sponsors, and the local community over the years. Although football is not as expensive a sport as some, in order to maintain the Guam Football Association, and the number of teams that participate at the international level, significant finances are necessary. The greatest financial burden involves the cost of travel throughout the Pacific region for the Pacific Games and mini Pacific Games, as well as to Asia for the various competitions involved. In the Asian Region, Guam teams have participated in the Philippines, Japan, Korea, Vietnam, China, Myanmar, Iran, and Nepal, among other countries. In the Pacific Region, Guam teams have participated in Tahiti, Papua New Guinea, Vanuatu, Fiji, and Palau. 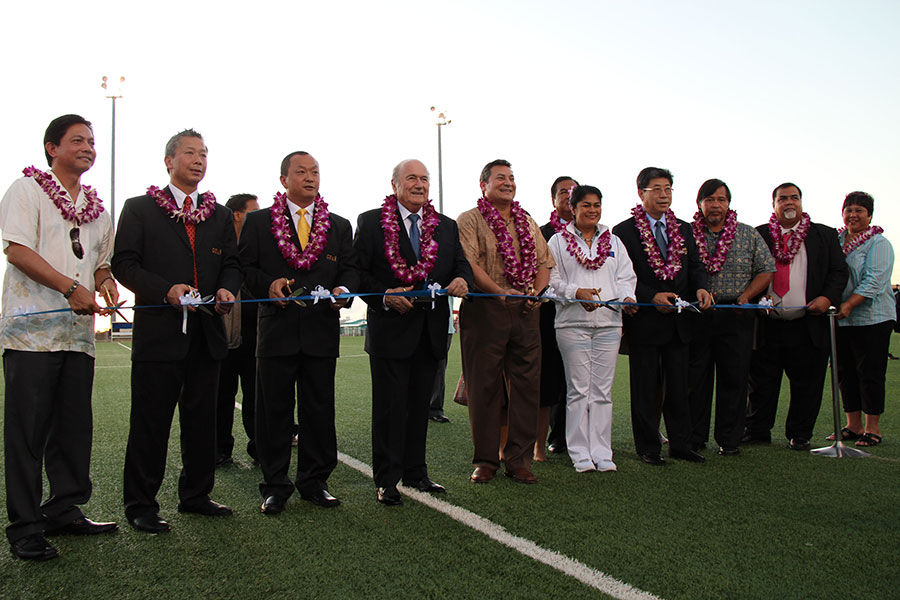 There are over 20 teams that make up the men’s league. To date, only the NAPA Rovers FC have competed in the AFC Cup, a continental club tournament. Champions of the domestic league, as well as the champion of the GFA Cup tournament, may be invited to compete in AFC Cup qualification rounds.

Women’s club football features competitive and recreation leagues. The Bud Light Women’s Soccer League, Guam’s top women’s football league, features a Premier Division and an Amateur Division, with 12 teams.  In 2013, a recreational Docomo Pacific GFA Soccer Moms League was created for teams with novice and intermediate level players who are mothers looking to try the sport. In the first two seasons of the Soccer Moms League, close to 300 women signed up to play. In order to meet the demand for more recreational women’s leagues, the GFA Women’s Intermediate 7-A-Side Recreational League – now known as the GFA Women’s Recreational League – was developed for mid-level female players. The Soccer Moms League and the Intermediate League more than doubled the number of registered female players at GFA in one single season.

Six co-ed divisions comprise the Triple J Auto Group Robbie Webber Youth Soccer League – U6, U8, U10, U12, U14 and U16. Additionally, the league now includes U7 and U9 All-Girls divisions, beginning Spring 2020. Youth leagues are held twice yearly – a spring season from February to April and a fall season from September to November. Particularly for the teams in the U6 to U10 divisions, a jamboree is held at the conclusion of each youth league season.

Close to 150 teams from 15 clubs participate in the youth leagues. On average, about 1,700 youth athletes participate in the youth league each season. Clubs are generally geographically based, but do not have official districts. Club coaches are mostly voluntary, but are committed to their respective teams. In order to assist with grassroots development, Guam Football Association regularly holds the GFA “D” Coaching License course for club coaches. Introduced in 2016 for one youth league season, the Club + Player Development Program featured Guam national licensed coaches to assist with youth club training sessions.

The sport of football has been growing very quickly on Guam and Guam Football Association is taking major steps to increase not only participation, but also the quality of the players, coaches, officials, and administrators. Guam Football Association consistently coordinates FIFA and AFC courses in coaching and officiating for the local football community. Additionally, these high-level courses have attracted participants from the region to register.

Aside from athletic endeavors, Guam Football Association has consistently found ways to move ahead politically with the appointments of several members to posts in FIFA, AFC and the East Asian Football Federation (EAFF). Guam Football Association has been identified as a model organization globally for its commitment to fast-track growth and development in football and overall increased popularity of the sport in Guam.

Check out our Activity Reports: