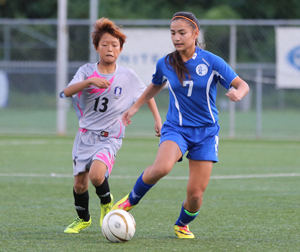 Posted at 04:19h in Friendlies, News by GFA GW Admin

A handful of teams from the recently concluded Triple J Auto Group Robbie Webber Youth Soccer League extended play for at least another week with friendly matches against a visiting U13 boys team from Seoul, Korea Rep. at the Guam Football Association National Training Center.

“Our team is made up mostly of players from different schools,” said visiting 13-year-old player Choi Sung Bin through a translator. “I like Guam, especially the weather that is good for playing soccer. The teams we’ve played so far are good and if given the chance in the future, I’d like to come back to Guam.”

The visiting team arrived on Wednesday and will play a total of five matches through the weekend before returning to Korea Monday. Choi Sung Wook, one of the team’s officials, lived in Guam previously and is a friend of GFA Asst. Technical Director and Masakada head coach Sang Hoon Kim. Choi recommended to the team’s coach, Kim Ki Chan, to bring a youth team to Guam to play in friendly matches.

“Through these friendly matches in Guam, I want the players to gain match experience by playing against different players and teams than those they are familiar with and also to see how other teams outside of Korea play,” said Kim Ki Chan through a translator. “We really like the experience so far in Guam and I hope we can come back again next year to play.”

The team played against the Quality Distributors Wednesday evening and took a break Thanksgiving Day. The team next played a mix of the Mini Masakada, Guam U14 Girls national team and some players from the United Airlines GFA National Academy U12 division Friday afternoon. The team later took on the ASC Trust Islanders and Tigers Saturday. The visiting team’s final match was against the Wings FC Sunday.

“The Korean team is good at communicating with each other on passes, and for what they lacked in height or size, they make up with their aggressiveness on the field,” said Jenna Han, who scored a goal in Friday afternoon’s match and played again Saturday morning for the Islanders. “I enjoy these types of matches because it gives us more match experience against teams from other countries. I would also like to travel to other countries to play, too.”