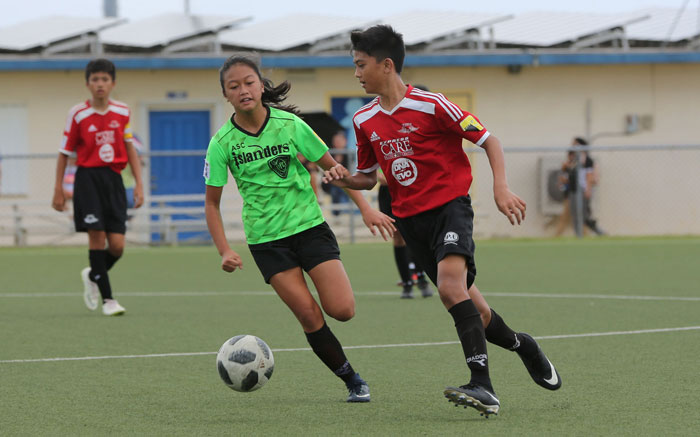 [September 14, 2018 – Harmon, Guam] – After a short hiatus due to last week’s storm preparations, soccer is back in full swing this weekend with five different leagues in season.

Playoffs for the Budweiser Men’s Futsal League kick off Sunday at the Guam Sports Complex gym beginning at 2 p.m. with No. 4 Sidekick SC taking on No. 5 Bank of Guam Strykers. No. 3 Quality Distributors will play against No. 6 Bombers SC in the day’s middle match at 3 p.m. followed by No. 2 Mosa’s against No. 7 Crushers FC at 4 p.m. No. 1 Tumon IDL received a bye into the semifinals, set for 7:30 p.m. Sept. 19 against the winner of the Sidekick SC-Bank of Guam Strykers fixture. 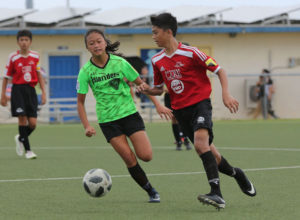 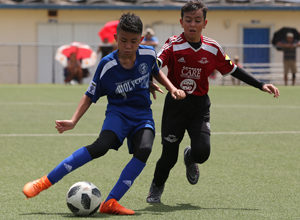 Guam Shipyard Wolverines’ Riley Rama prepares to send the ball to a teammate as Wings FC’s Raif Sablan approaches him on defense during a 2018 Aloha Maid Minetgot Cup Elite Youth Cup tournament match at the Guam Football Association National Training Center in this file photo. The Aloha Maid Minetgot Cup Elite Youth League U13 Division is set to kick off Saturday at GFA. 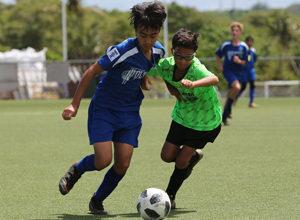 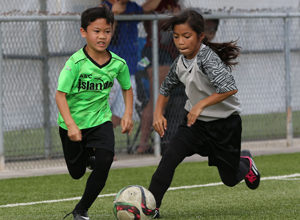 The ASC Trust Islanders and the GPSI Southern Cobras play in a U11 division match during the Spring 2018 season of the Triple J Auto Group Robbie Webber Youth Soccer League at the Guam Football Association National Training Center. The Fall Season of the youth league continues Saturday with Week 2 matches.