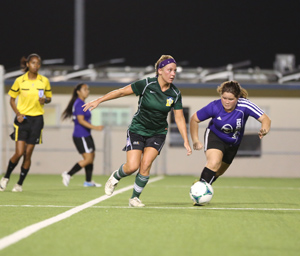 The Lady Crushers quickly employed a mix of several offensive options from the opening whistle – speedy plays on the wings, crosses to aggressive strikers, and long-distance shots – keeping Quality’s defensive line on its toes for the duration of the match.

Skyylerblu Johnson opened scoring for both teams in just the second minute of play and four minutes later, Caylani Estoy, who made her women’s league debut Sunday, doubled the Lady Crushers’ advantage. Visiting player Anjelica Perez, also captain of the Masakada, Guam women’s national team, later scored in the 12th minute to dig Quality into a 3-0 hole early in the contest.

Quality’s Paris “Mames” Blas answered in the 18th minute, but 10 minutes later, the Lady Crushers’ Colleen Naden continued her team’s three-goal cushion with her first goal for the season. Later, Quality’s Paige Surber took advantage of ample space on the right side and sent her shot to the opposite post up and over the Lady Crushers keeper Mya Jade Sanchez to get her team within two for the 4-2 score at halftime.

Quality managed to limit the Lady Crushers to two goals in the second half, but the Lady Crushers defense, with key saves from Sanchez, shut down Quality on the other side of the field. Johnson and Perez scored the lone second-half goals of the match. 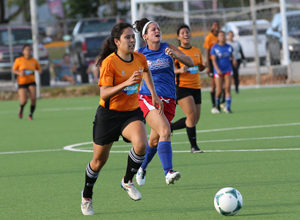 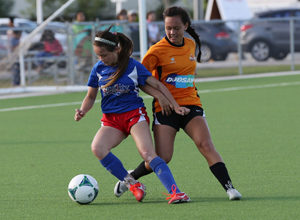 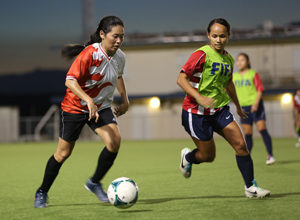 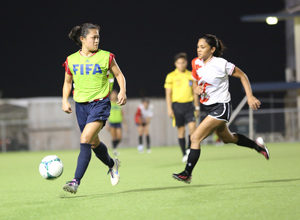 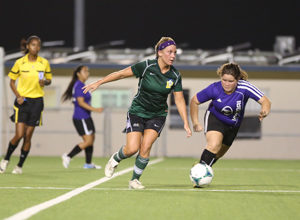 The Lady Rovers’ Niki Perkins accelerates in the midfield to get past the defense of Hyundai’s Shania Spindel in an opening week match of the Bud Light Women’s Soccer League Spring season at the Guam Football Association National Training Center. The Lady Rovers defeated Hyundai 3-0. 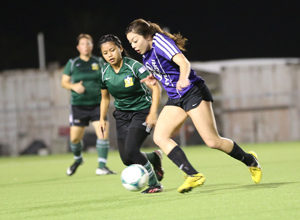 Hyundai’s Olivia Flores sprints toward the goal with the ball as the Lady Rovers’ Martina Duenas tracks her on defense in an opening week match of the Bud Light Women’s Soccer League Spring season at the Guam Football Association National Training Center. The Lady Rovers defeated Hyundai 3-0.