Wolverines, Heat Earn Championships in U14, U17 All-Girls Soccer

Home > GFA Programs  > All Leagues  > All Girls  > Wolverines, Heat Earn Championships in U14, U17 All-Girls Soccer 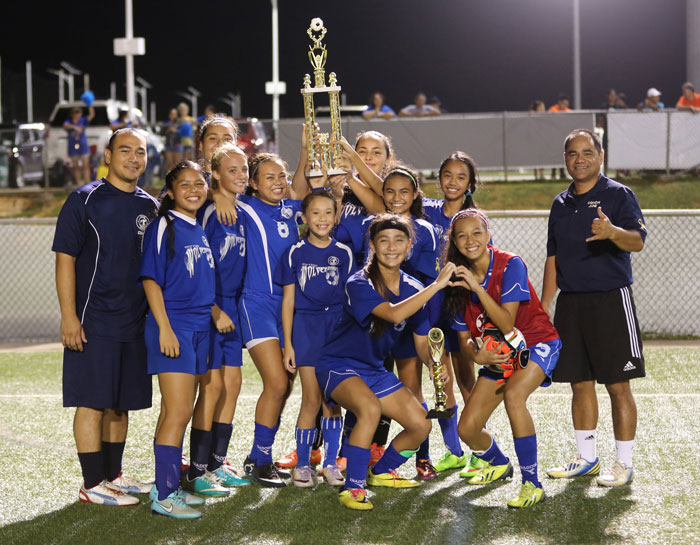 10 Dec Wolverines, Heat Earn Championships in U14, U17 All-Girls Soccer

Posted at 19:29h in All Girls, All Girls News, All Leagues by GFA GW Admin

Being at the right place at the right time has a much stronger meaning now for the Guam Shipyard Wolverines, champions of the U14 division of the Guam Football Association and The Score’s “Just Kick It” All-Girls League at the GFA National Training Center Tuesday.

A communication error by the ASC Trust Islanders defense allowed a chip shot to fall into the box and deflect off of Wolverines striker Alina Gumataotao into the goal, which became the eventual game winner in the second half of extra time in an exciting 2-1 contest.

The Islanders had the early 1-0 advantage in the first half of regulation time, when a long-distance strike from Isabella Bass in the game’s opening minutes had enough height to escape the reach of Wolverines keeper Brianne Leon Guerrero and into the goal.

The Wolverines later equalized in the second half when U14 division Golden Boot winner Chloe Salas drew a pair of Islanders defenders to her on her run up the middle of the field before dishing the ball to Tiffani Lopez, whose left-footed shot found the back of the net.

Despite allowing the early goal, Leon Guerrero played an instrumental role in defense with key saves the remainder of the match, including stopping a shot from Mia San Nicolas in the first half of extra time by extending her leg just enough to stop the ball right at the goal line with her foot.

The Islanders had other opportunities in extra time, including a long-distance strike midway through the second half that hit the crossbar. Leon Guerrero managed to grab the ball on the ground right before San Nicolas could attempt a follow-up shot.

The highly anticipated match up between the lone undefeated teams in the division was as close as many had expected, with both teams featuring a handful of U14 Girls national team members who had trained together earlier this year under head coach Sang Hoon Kim.

In the U17 division championship match, the Southern Heat avenged a group stage loss to the Sharks with a 5-2 victory for the title. U17 division Golden Boot winner Colleen Naden didn’t disappoint, finishing the match with a hat trick. Clarissa Albalos and Maylani Simon also scored in the victory.

The Heat’s strong, anchored defensive line also made a difference in the match, limiting the Sharks’ forward movement from the midfield and initiating effective counterattacks.

Skyylerblu Johnson scored the Sharks’ goals, both in the first half.

In other U17 matches, the Islanders defeated the Cobras 6-0 to take third place with two goals each from Rhiannon Pangindian and Paris “Mames” Blas, and one each from Aubrienne Pangindian and Erlissa Delfin.

Quality Distributors defeated the Geckos 5-1 with two goals from Hopemary Calip and one each from Gracie Clark, Mia Chabanne, and Franshay Shippey. Bila Aguon scored for the Geckos. 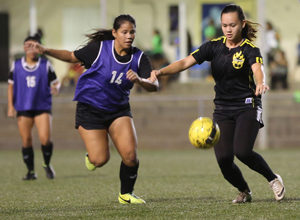 The Southern Heat’s Colleen Naden controls the ball facing defensive pressure from the Sharks’ Maria Abbey Iriarte during the championship match of the Guam Football Association and The Score’s “Just Kick It” All-Girls League U17 division at the GFA National Training Center. The Heat defeated the Sharks 5-2. 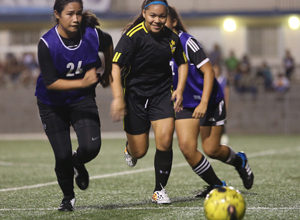 The Sharks’ Caylani Estoy and the Heat’s Alyssandra Cruz chase a loose ball during the championship match of the Guam Football Association and The Score’s “Just Kick It” All-Girls League U17 division at the GFA National Training Center. The Heat defeated the Sharks 5-2. 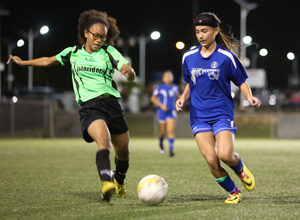 The ASC Trust Islanders’ Isis McNeil extends her foot out to try to stop the Guam Shipyard Wolverines’ Chloe Salas from advancing to the goal during the championship match of the Guam Football Association and The Score’s “Just Kick It” All-Girls League U14 division at the GFA National Training Center. The Wolverines defeated the Islanders 2-1 after extra time. 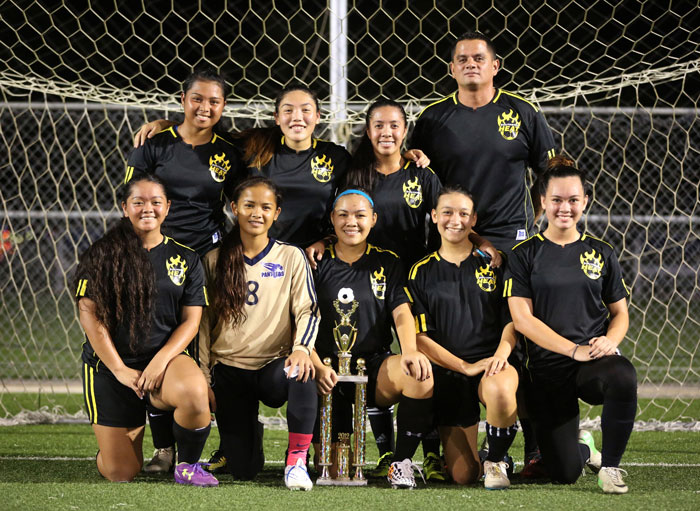