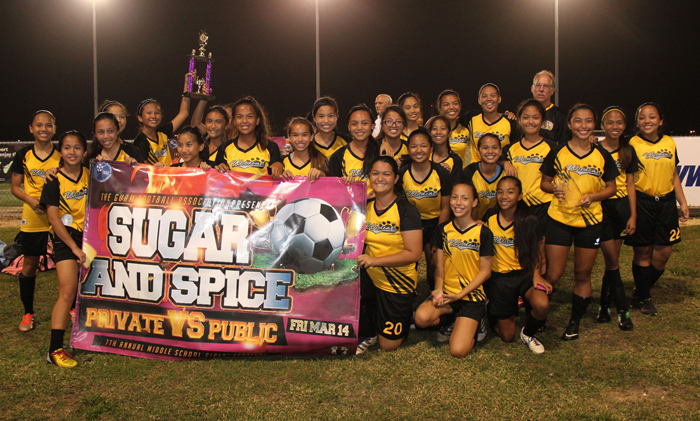 Posted at 02:55h in Interscholastics, News by GFA GW Admin

The Luis P. Untalan Middle School Wildcats dashed all hopes of a championship repeat by the Agueda I. Johnston Middle School Pirates with a 3-0 victory in the 7th Annual “Sugar and Spice” Middle School Girls Soccer Festival presented by The Score at the Guam Football Association National Training Center.

Skyylerblu Johnson, awarded the festival’s MVP trophy at the conclusion of the event, scored a hat trick for the Wildcats in the final.

“Since we made it this far (to the final) this year, we really didn’t want to have to go home with a second place trophy,” said Johnson, an eighth-grader at Untalan, after the match. “We were cautious in the beginning knowing that they (the Pirates) would try to start strong to defend their title from last year, but we still wanted to give Agueda a good fight. After gaining momentum early with good ball possession, we were able to relax and just play our game.

“Overall, I think this festival went very well. I liked how it was an islandwide tournament, giving us an opportunity to play against schools from the other middle school league,” added Johnson, who also has represented Guam in international competition at both the U14 and U16 levels.

The defending champions faced a tough Vicente S.A. Benavente Middle School Roadrunners team – the top-ranked team from the Interscholastic Middle School Girls Soccer League – in the semifinal and narrowly won with a single goal from Jalana Garcia to make a finals appearance the second year in a row. The Wildcats also edged its semifinal opponent, the Jose L. G. Rios Middle School Voyagers, with Bila Aguon scoring the lone goal in the 1-0 contest. The Wildcats won a total of four straight matches to win the championship title.

The Voyagers won an emotional match against IIAAG Middle School Girls Soccer League No. 1 ranked team, the Bishop Baumgartner Memorial School Obispos, by first forcing a 1-1 draw in regular time with a goal just 15 seconds before the final whistle. In the ensuing penalty kick shootout, the Voyagers won 2-0. Voyagers’ goalkeeper, Alanna Fegurgur, managed to stop three penalty kicks from the Obispos and helped her team move on to the semifinals.

“I was talking to some other parents and we all agree that this is a great event for the girls,” said Christine Quinata, who attended the festival to cheer on her daughter, Madison Knaeble, and the St. Anthony Catholic School Raiders. “Not only does it give the school teams from the two different leagues a chance to play against each other, it also gives the players the opportunity to meet new friends.”