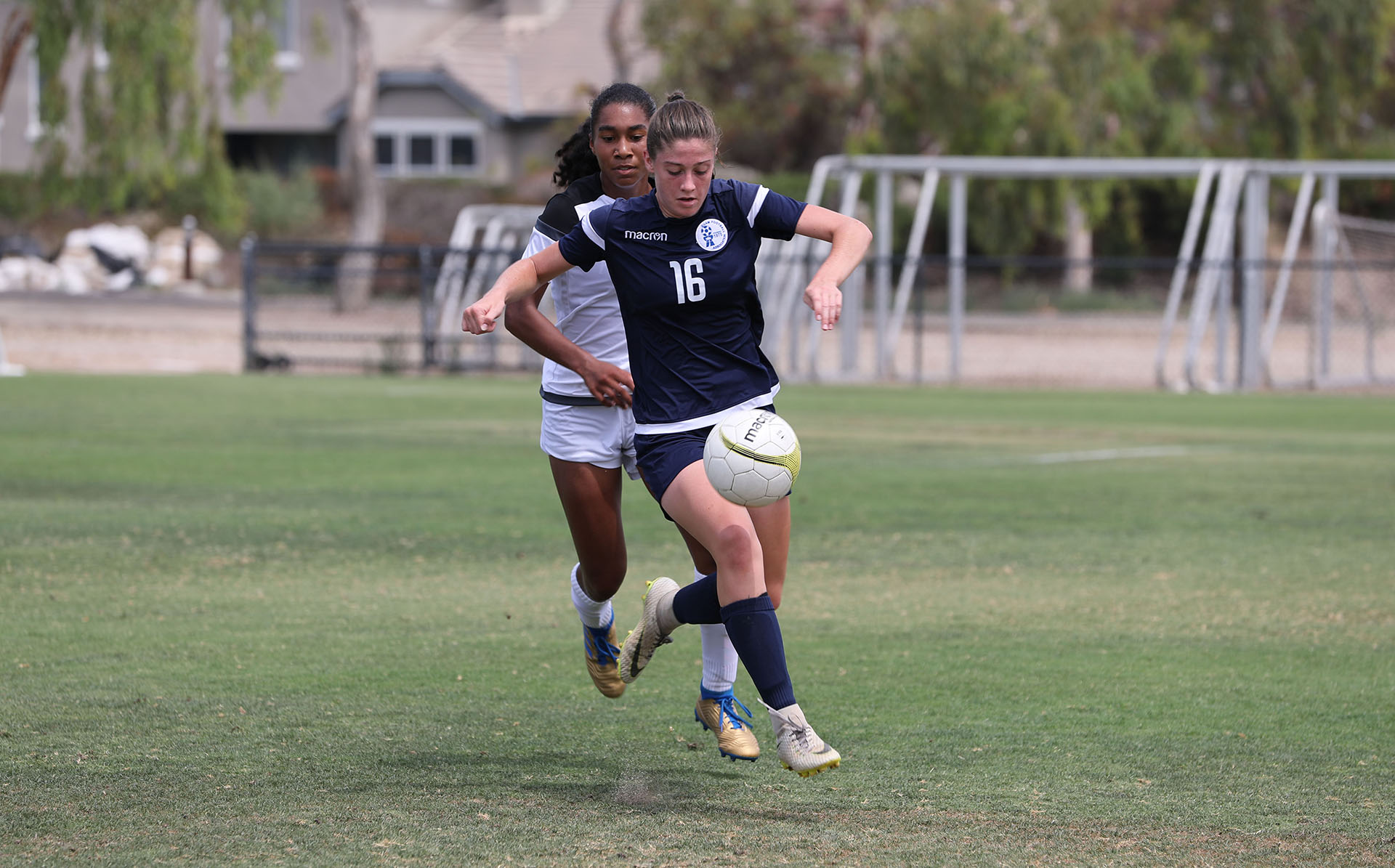 Posted at 02:00h in Masakada Tournaments, News, News, U20 Women's Tournaments, Women's Football by GFA Website Manager
[July 4, 2022 – Harmon, Guam] Emily Walton will bring her Guam National Program experiences and training with her as she looks forward to contributing to another successful women’s soccer season at Bob Jones University in Greenville, South Carolina.

“The Guam National Program set me up to play intercollegiate soccer by investing in every aspect of my game: technical, physical, and mental,” Walton said. “Through the high-level coaching on the pitch and in the gym, I was pushed to become a better athlete, a better student of the game, and really to fall in love with playing soccer again.

“Playing professionally would always be an end goal, but until then, I am looking forward to competing for championships with the Bruins and getting connected with the soccer community stateside. I hope to come back to Guam and continue to play with the Women’s National Team in the future,” added the 2022 Harvest Christian Academy graduate.

The Bob Jones University Bruins are coming off of a record-breaking 2021 season according to the university’s Athletics Web site. The team finished with an 18-4-1 record overall ending the regular season without a loss in 17 straight matches. In Regionals, the team went 1-1 and received an at-large bid to compete at the National Christian College Athletic Association (NCCAA) D1 National Tournament in Kissimmee, Florida. The team was seeded No. 4 in its fairy-tale run, but bowed out of the tournament in pool play, the Web site states.

“Since coming into the Guam U20 Women’s National Program, Emily continues to show her confidence and passion for the game with the desire to improve,” said Ross Awa, former Head Coach of the Guam U20 Women’s National Team and incoming Head Coach of the Masakåda, Guam Women’s National Team. “Emily had an opportunity to play with the team during an identification camp last summer and has shown emotional stability. Her team will gain a player who will not be influenced by external factors, someone who has control of herself without letting situations in the game affect her play.

“Emily will gain a lot of new experiences at Bob Jones University, which she will be able to share and help others within our women’s program when she comes back during breaks,” Awa added.

Walton selected Bob Jones University because of its Christian values, upstanding academics and athletic program, she said. She also has family in Greenville: her sister, two aunts, and her grandfather.

Walton was recently featured by Bob Jones University as part of its 2022 women’s soccer recruit class. The featured stated, “a strong finisher, (Walton) has quickness, pace, technique, and will be a good asset to the women’s soccer program.”

Walton plans to head to Greenville the first week of August in time for preseason matches against North Greenville University on Aug. 19, followed by a match against NCAA Division I’s Furham University on Aug. 30. The team plays its first regular season match Sept. 2 against North Carolina Wesleyan College and the following day against Meredith College, both in Raleigh, NC. The team’s first home match of the season will be played Sept. 6 against Pfeiffer University. The full schedule is available online at the BJU Bruins Web site.

Emily Walton is the youngest daughter of Gary and Faith Walton and has four older siblings: Matt, Amanda, Ty, and Kara.

Emily Walton plans to major in Health Science (Pre-PA) with a minor in coaching. 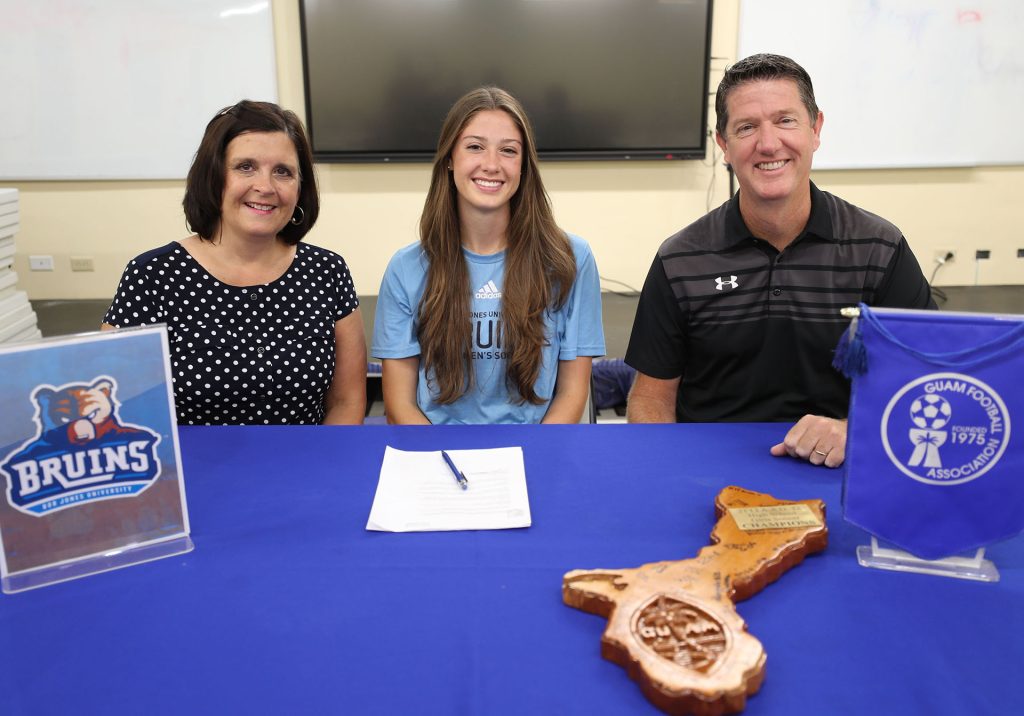 Emily Walton poses for a photo with her parents after announcing her commitment to play intercollegiate women’s soccer for Bob Jones University during a presentation event Monday morning at the Guam Football Association National Training Center Lecture Hall. In the photo are, from left to right, Faith Walton (mother), Emily Walton, and Gary Walton (father). 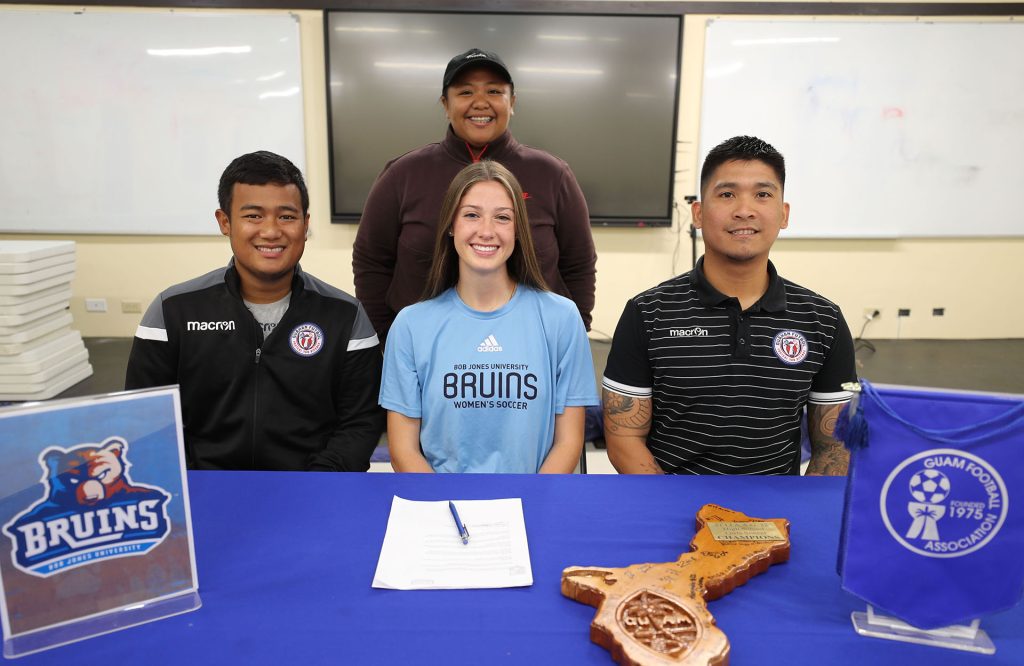