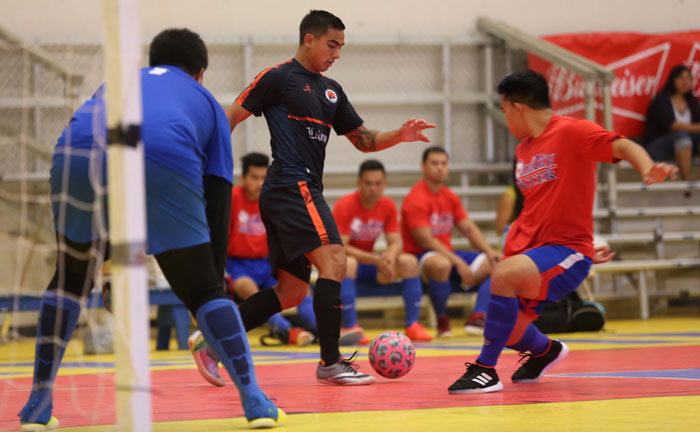 Tumon/IDL dominated in the season finale, amassing an 8-1 lead by halftime, with league Golden Boot Ashton Surber and teammate Eddie Lee Lorenzo each scoring a hat trick in the first half. Lorenzo scored twice more in the second half to lead all scorers with five goals.

Tumon/IDL’s Marcus Lopez also contributed a hat trick in the win and teammates Jason Cunliffe and Jonahan Romero each scored once. Tumon/IDL’s other goal came on a Quality own goal.

Tumon/IDL, earning a bye in the first round of playoffs as the No. 1-seeded team in the league, earlier defeated the Sidekicks FC 10-2 in its semifinal match Friday evening to earn a ticket to the finals.

Lopez collected four goals in the win to lead all scorers. Surber and Romero each scored twice in the win. Cunliffe and Jan Flores scored Tumon/IDL’s other goals. GianCarlo Abril scored both of the Sidekicks FC’s goals.

Quality traveled a more difficult road to the championship match, first defeating the Bombers SC 10-5 in the first round of playoffs and later managed to hold down and upset No. 2 Mosa’s 3-2 in the semifinals.

Pangindian, Salas, and Michael Castaneda each scored once in Quality’s semifinal win over Mosa’s Friday evening. Gideon Tyquiengco scored Mosa’s first goal in the contest about nine minutes into the second half. Mosa’s other goal came on a Quality own goal about a minute later.

Surber finished the regular season with 20 goals, five more than teammate Romero who finished in second place. Surber’s younger brother Keith, who plays for Mosa’s, finished in third place with 14 goals for the season.

Drews finished on top of the Golden Glove standings, allowing 25 goals in 300 minutes played for the lowest 7.5 goals allowed average for the season, according to final league statistics. 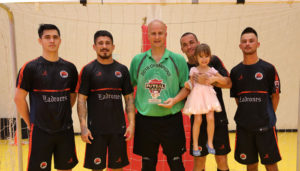 Tumon/IDL poses with the champions trophy of the 2018 Budweiser Men’s Futsal League during an awards presentation held after the league’s championship match Sunday at the Guam Sports Complex Gym. Tumon/IDL defeated Quality Distributors 14-5 to claim the 2018 crown. In the photo, are left to right, Eddie Lee Lorenzo, Jonahan Romero, David Drews, Jason Cunliffe holding daughter Ila, and Ashton Surber. Not pictured from the championship match roster is Marcus Lopez. 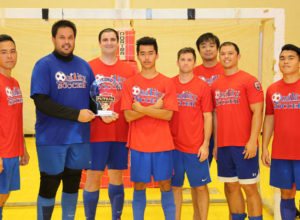 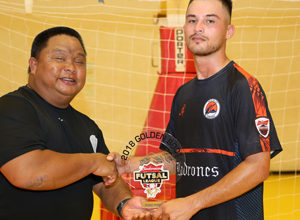 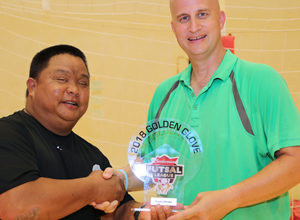