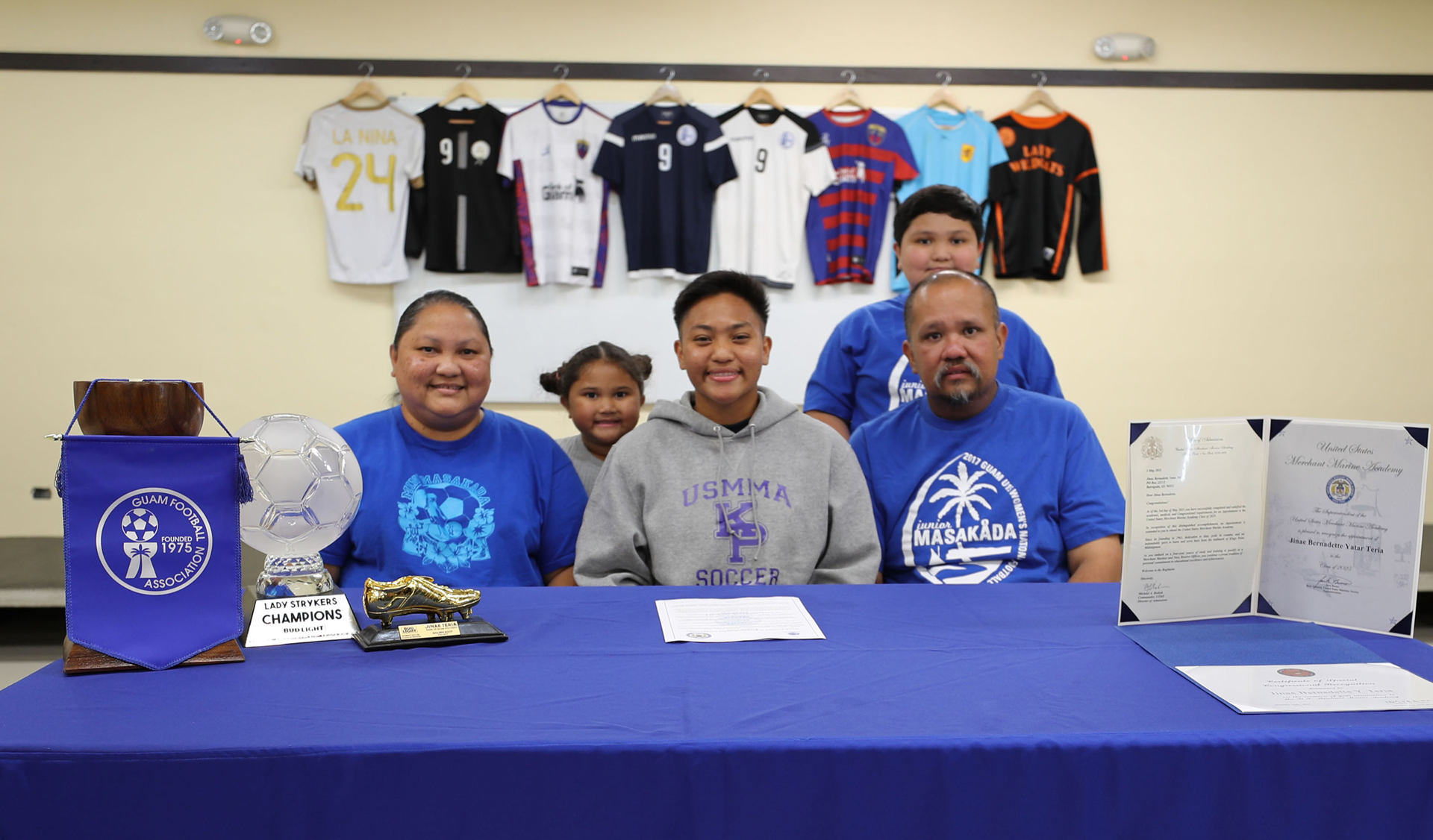 In addition to her acceptance into the prestigious academy, Teria, set to graduate from Tiyan High School Jun. 4, also earned a spot on the Mariners’ first-ever intercollegiate women’s soccer team roster beginning this fall season.

“Throughout high school, my instructors at Tiyan High encouraged me to plan for my future based on the best path for me,” Teria said. “Prior to the pandemic, my instructor, Colonel Frank Flores, advised me take a chance and apply to military academies. At first, I was hesitant to apply due to my fear of failure, but after deciding what I plan to pursue and what I wanted in a school, I realized that the United States Merchant Marine Academy is my ‘dream school.’ 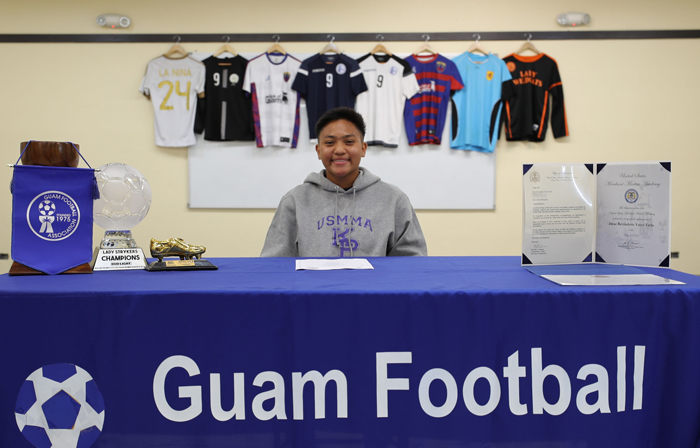 Jinae Teria poses for a photo during a presentation event at the Guam Football Association National Training Center Lecture Hall. Teria was accepted to the US Merchant Marine Academy and earned a spot on the Mariners Women’s Soccer Team Roster.

“It is an institution that educates leaders of exemplary character, abides by the motto of “Acta Non Verba’” or “Deeds not Words”, and holds integrity, honor, intelligence, dedication, and competence in high regard. It provides outstanding engineering and business programs, the option of active duty in any branch of military, and grants a chance at representing myself, my family, and the island while continuing to play the sport I love at a college level. With a new mindset, I overcame my fear and transformed it into drive. As Zig Ziglar once said, “ F-E-A-R has two meanings: ‘forget everything and run’ or ‘face everything and rise’ the choice is yours,” Teria added.

According to U.S. News and World Report, the US MMA is ranked No. 2 in the United States in Top Public Schools and No. 3 in Regional Colleges North, with an acceptance rate of 15 percent based on its Fall 2019 numbers, the publication states. The US MMA sports teams are part of the NCAA Div. III Skyline Conference. The start of its women’s soccer program was announced last year with the goal to build a team to officially compete at the NCAA Div. III level by Fall 2022, the Skyline Conference Web site states.

“First and foremost, USMMA recruits need to meet our strict academic admissions requirements and Jinae met those – the importance of studying and getting good grades in high school cannot be overstated,” said Lt. Andreas Commins, Head Coach of the US MMA Women’s Soccer team via E-mail. “I really enjoyed meeting Jinae and her family over Zoom and I really like her upbeat, motivated attitude. She shows a clear desire to improve in every area of her life and that is exactly the type of player I want to help build this program.

“Additionally, the Guam Football Association and the (Bud Light) Women’s Soccer League does a good job with media and video, and I was able to see Jinae in several games and situations, which in the time of COVID where coaches can’t travel, is vitally important,” Commins added.

While preparing for the team’s debut at the NCAA Div. III level in 2022, players will be competing in the NIRSA league, Commins said. 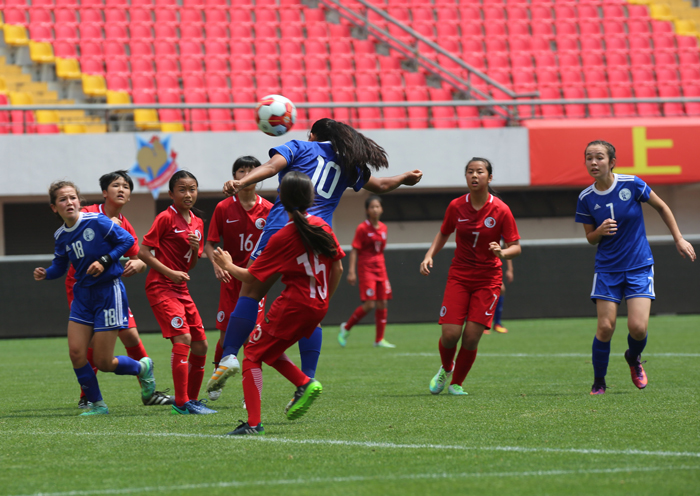 Jinae Teria (No. 10), rises above Hong Kong defenders to connect on a header for goal from a Minami Rabago free kick during the 2017 EAFF U15 Girls Youth Tournament in Shanghai, China PR in this file photo. Teria’s goal was the eventual game winner.

“NIRSA is the governing body for collegiate competitive club sports and they have leagues, regional championships, and national championships,” Commins said. “For the incoming recruits, we will begin just as if we were playing in the NCAA, with a full training and game schedule. For all intents and purposes, it will look just like the 2022 season. I am very excited to get the players here on campus and get this program started.”

Teria started to build her elite soccer resume following her acceptance into the U12 division of the 2014 United Airlines GFA National Academy program. She later matriculated into GFA’s National Program and featured on Guam’s U14 Girls National Team in 2015 as a 12-year-old. The following year, in the AFC U14 Girls Regional Championship in Beijing, China PR, Teria scored the eventual game-winner for Guam off a Minami Rabago free kick in the team’s 1-0 victory over Hong Kong.

Teria repeated a similar situation with Rabago, and scored off a header in Guam’s 1-0 victory over Hong Kong in the 2017 EAFF Girls Youth Tournament in Shanghai, China PR, in 2017.

The same year, Teria made her debut for the Masakåda, Guam Women’s National Team as a starting player in the 2017 Marianas Cup Women’s Competition held in Guam. Later, Teria made her second start for the Masakåda in an international friendly match against Singapore in Singapore. In 2018, she also featured on Guam’s U19 Women’s National Team at the AFC U19 Women’s Championship Qualifiers in Bishkek, Kyrgyz Republic, among other tournaments. 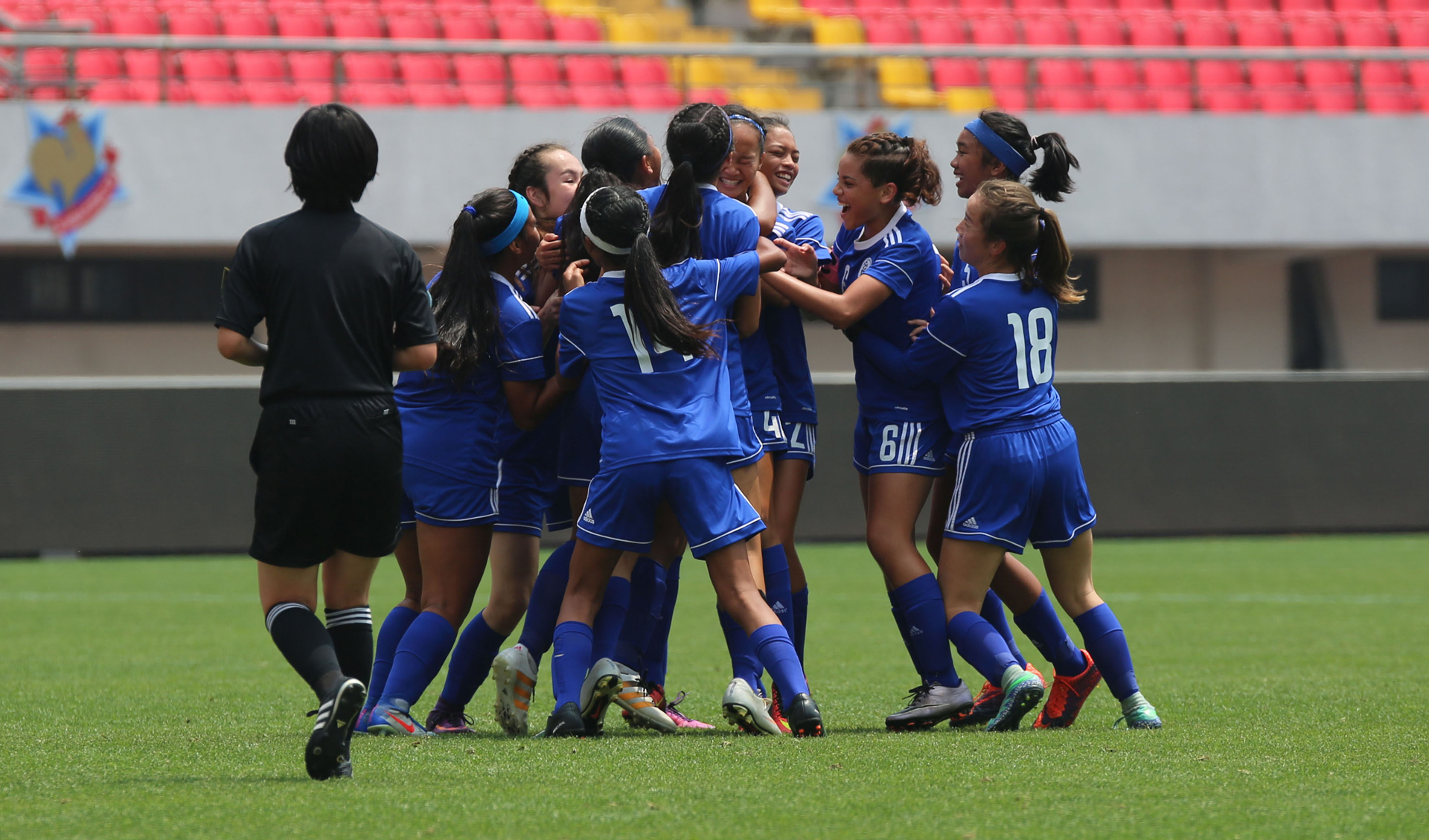 Jinae Teria and her teammates on the Guam U15 Girls National Team celebrate after Teria connected on a header for goal from a Minami Rabago free kick during the 2017 EAFF U15 Girls Youth Tournament in Shanghai, China PR in this file photo. Teria’s goal was the eventual game winner.

“The Guam National Program has offered many opportunities for me and other players to develop our skills and techniques on the pitch, as well as instilling in us respect, discipline, and grit,” Teria said. “I believe these values are also vital in achieving personal and professional ambitions. The past six years on Guam’s traveling teams have provided experience through high intensity tournaments around the world, while blessing me with a second family.

“As a result, I am honored to announce that I have successfully achieved my goal of attending a military academy while concurrently playing college soccer; however, it doesn’t stop there. I will continue to hold the lessons and guidance bestowed on me as I begin this next chapter of my life,” Teria added.

“First and foremost, I would love to thank my parents, Jimmy and Doreen Teria, for their sacrifice and unfaltering support through the past 18 years,” Jinae Teria said. “I would also like to thank the rest of my family and my friends, my coaches and mentors, fellow teammates, and GFA for all the support and love.”

Teria, a Senior Master Sergeant with Tiyan High’s AFJROTC program, plans to major in Maritime Logistics and Security to become a deck officer, she said. She will need to report to the Academy by July 9. According to her certificate presentation, appointment to the academy “is the equivalent of a scholarship worth approximately $262,000 over the four-year period.” Upon completion, she will commit to five years of service, Teria said. 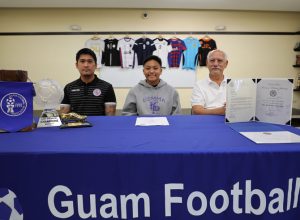 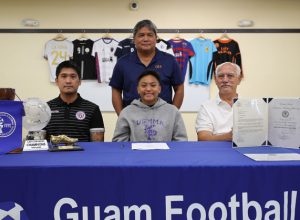 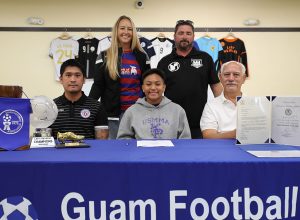 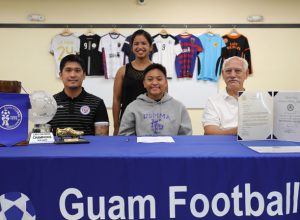 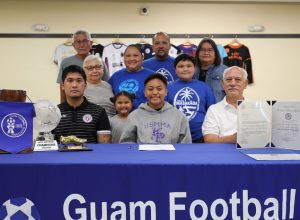