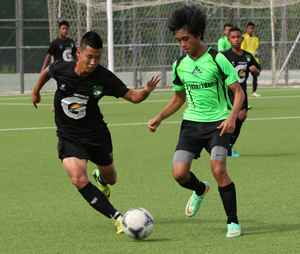 Posted at 03:31h in Friendlies, News by GFA GW Admin

The ASC Trust Islanders reversed a two-goal deficit from halftime, but Tan Holdings FC’s single goal in the deciding half was enough to force the teams to a 5-5 draw in a Day 2 match of the Marianas Invitational Tournament at the Guam Football Association National Training Center.

After falling behind 2-0 early on, the Islanders found some rhythm in a series of passes from Kamuela Rhoads and Jestin Escobar that eventually found Jeffrey Ho unmarked on the left side for the finish. Minutes later, Escobar capitalized on a miskick by Tan Holdings at the centerline and darted to the goal to level the match, but the rest of the half belonged to the visiting team.

Tan Holdings’ Marc Gerald Mora sent Yoshi Mafnas on a run through the center and after heading the ball over the last two defenders, he finished the one-on-one play against first-half keeper Logan Mance for the 3-2 lead. Later, a shot from Sean Perez from the left side extended Tan Holdings’ lead to 4-2 before the halftime whistle.

The Islanders, known for crafting demoralizing comebacks in past Robbie Webber Youth League seasons, caught a break about three minutes into the second half. Perez was called on a handball violation near the centerline, and the Islanders’ Jared Pangindian blasted a long-range shot perfectly to the right post to close the scoring gap. About 15 minutes later, the Islanders’ Phillip Ogo took a throw-in from Sora Recella, dribbled around the Tan Holdings defense, and passed the ball to Nicolas Cabuhat for the one-touch shot that leveled the match at 4-all. Ten minutes later, Leon Bamba managed to fend off a pair of Tan Holdings defenders on the right side and passed the ball into the box, eventually finding Recella’s foot to give the Islanders the 5-4 lead.

Perez later saved his team from defeat after taking a pass from Kautong Kiyofumi Omengkar and using his speed to break the Islanders’ last line of defense for the game-tying goal. Both teams had a series of shot attempts in closing minutes, but none could find the back of the net.

“Early in the second half, we gained the momentum – we just connected with each other better and kept it simple to take the lead from them,” said Bamba. “Credit to Tan Holdings – they kept fighting to the end.

“It’s a good experience for us to play in tournaments like this with visiting teams – particularly with this tournament, some of the guys from Saipan played at the (youth) national level. It’s also a good opportunity since we don’t play a lot of soccer in the summer – I hope we can have more tournaments like this in the future,” added Bamba.

In the day’s other match, the Wings FC defeated the Strykers 4-0 to stay in the No. 1 spot in tournament rankings. Agustin Choi scored a hat trick in eight minutes and teammate Donovan Reyes scored the team’s other goal off a free kick in the 60th minute.

With two draws, Tan Holdings holds onto the No. 2 spot in the rankings, followed by the Islanders and the Strykers, respectively, compiling one draw and one loss in two matches. The Islanders currently out-rank the Strykers based on goal differential.

The tournament continues Sunday morning at 8 a.m. with Tan Holdings FC taking on the Wings on the lower turf pitch and the Strykers playing against the Islanders on the upper turf pitch at 9 a.m.

There is no admission fee to watch the matches. A full schedule is available online at http://www.guamfa.com/others-friendlies-schedule-results