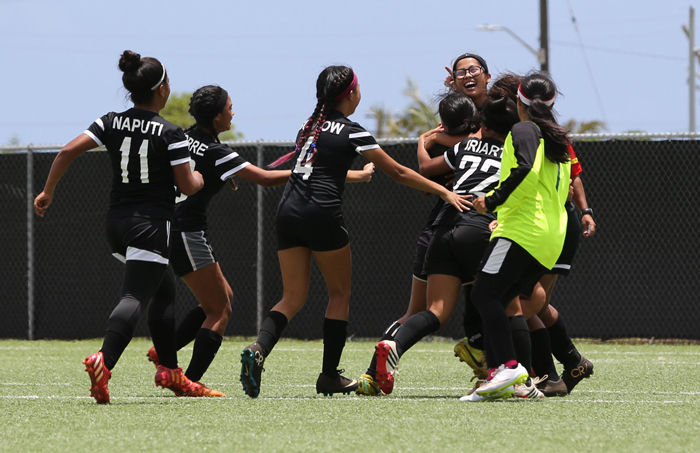 Posted at 04:30h in Interscholastics, News by GFA GW Admin

[May 23, 2015 – Harmon, Guam] A new champion will be crowned in the IIAAG Girls High School Soccer League with the exit of three-time champion Southern High School in the semifinals against the Simon Sanchez High School Sharks Saturday morning at the Guam Football Association National Training Center.

Both teams battled to a 0-0 draw through the entire match and extra time to force the penalty kick shootout. Right before the shootout, Southern made a goalkeeper change, putting in IIAAG Girls High School Soccer League MVP April Talledo to replace Anisia Topasna in the posts.

1) The Sharks earned the early score with Tayler Naputi’s shot to the left side that made it past a diving Talledo. (Sanchez 1, Southern 0)

2) Southern’s Colleen Naden bent her shot toward the right side, but the ball hit the post. (Sanchez 1, Southern 0)

3) The Sharks’ Maria Abbey Iriarte hit a strong shot over Talledo, but the ball hit the crossbar and landed straight down before bouncing out. (Sanchez 1, Southern 0)

5) The Sharks’ Franshay Shippey found a pocket on the right side to score her team’s second goal in the shootout. (Sanchez 2, Southern 0)

6) Southern’s Zoe Surber hit her shot over the crossbar for the missed opportunity. (Sanchez 2, Southern 0)

7) The Sharks’ Ha’ane Taitano sealed her team’s win with a shot to the left side. (Sanchez 3, Southern 0)