Quality, Rovers Win in First Round of Beach Soccer Playoffs 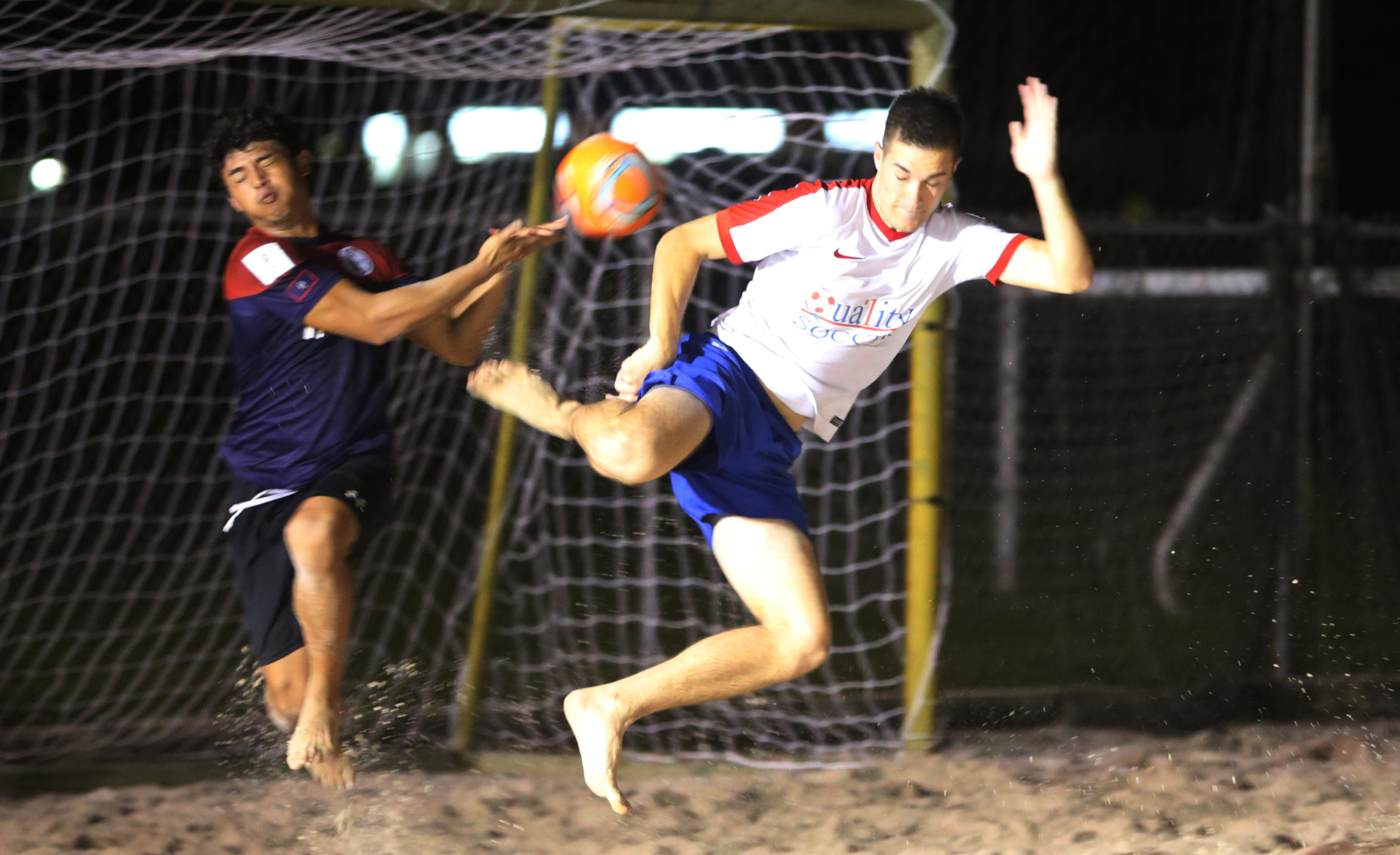 After dropping their final regular season match by just one goal, the Bobcat Rovers bounced back in the opening round of league playoffs, defeating No. 5 Crushers FC 11-3, to advance in the top half of the bracket.

The Bobcat Rovers amassed a three-goal lead in the opening 10 minutes of play, including an incredible bicycle kick finish by Todd Pangelinan from mid-court. A video highlight of the goal is available for viewing below and also is online on GFA’s Internet TV page, https://mycujoo.tv/ch/376?vid=41037

Arnold Torres and Matt Robles led all scorers with a hat trick each in the win and teammates Pangelinan and Cameron Lunod scored twice each. Brandon Auayan scored the Bobcat Rovers’ other goal. Justin Samonte, Jeremy Copple, and Tyler Guyton scored for the Crushers.

In the evening’s late match, Quality Distributors fended off No. 3 University of Guam Tritons 8-5.

Despite playing without substitutes for the early minutes of play, UOG’s defensive effort helped the team stay level with Quality through the first period, including a stop on a penalty kick by Dylan Naputi, filling in for Tritons’ usual goalkeeper Michael Topasna.

Quality’s four-goal second period eventually sealed the win for the No. 2-ranked team, which receives a bye in the next round of playoffs.

Though his team lost, UOG’s Joseph Quan led all scorers with a hat trick. Teammates Rafael Sablan and Jacques Diambra-Odi also scored for the Tritons.

The double-elimination playoffs continue Saturday, with the Bobcat Rovers taking on No. 1 Bank of Guam Strykers at 7 p.m. followed by the Crushers against UOG at 8 p.m. 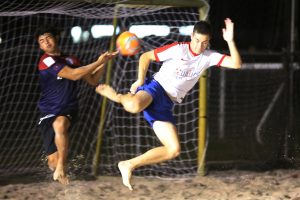 Quality Distributors’ Kyle Legozzie attempts a back heel shot in the air as University of Guam Tritons’ goalkeeper Dylan Naputi leaps to try to stop the shot in a Round 1 playoff match of the 2017 LandShark Beach Soccer League Wednesday at the Guam Football Association National Training Center beach soccer court. Quality won 8-5. 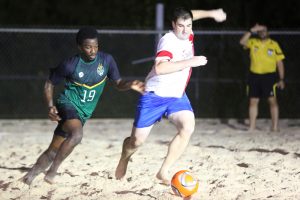 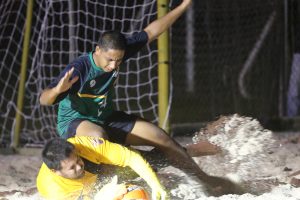 Quality Distributors goalkeeper Brett Maluwelmeng (in yellow) dives to collect the ball before a shot attempt University of Guam Tritons’ Dominic Gadad, who eventually fell behind Maluwelmeng on the play in a Round 1 playoff match of the 2017 LandShark Beach Soccer League Wednesday at the Guam Football Association National Training Center beach soccer court. Quality won 8-5. 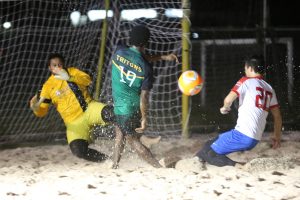 Quality Distributors’ RC Salas (No. 20) manages to lunge enough to block a shot by University of Guam Tritons’ Jacque Diambra-Odi (No. 14) as Quality goalkeeper Brett Maluwelmeng makes a move on the play in a Round 1 playoff match of the 2017 LandShark Beach Soccer League Wednesday at the Guam Football Association National Training Center beach soccer court. Quality won 8-5. 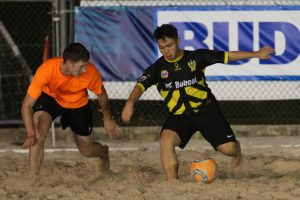 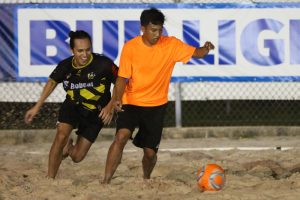