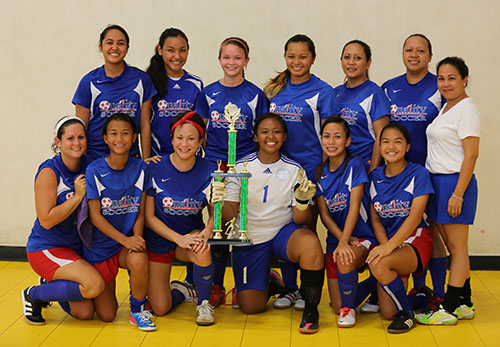 Quality Distributors FC added the 2013 women’s futsal championship title to its collection after the No. 1-ranked team defeated the No. 2 Paintco Lady Strykers in the championship match of the Bud Light Women’s Futsal League at the Guam Sports Complex gym.

Quality opened scoring a minute and a half in with a goal from Paige Surber off a pass from Nieves Cabreza, but the Lady Strykers quickly gained the upper hand moments later.

The Lady Strykers’ Alexy Barbe got around the defense of Quality’s Vanessa Quinata and took a shot to even the match. Later, the Lady Strykers’ Francesca Pangelinan chased down a pass down the right side and managed to kick the ball toward the goal. Quality keeper Chyna Ramirez reached out to stop the ball, but it instead crept into the goal. Less than two minutes later, Krystiana Martinez connected on a corner kick from Barbe for the 3-1 lead.

A tough shot from Surber from midcourt with 14 minutes left in the half cut Quality’s deficit to one goal and about 10 minutes later, Jodie Barnhouse, who scored the eventual game-winner for Quality in the semifinals, knocked in the equalizer for the 3-3 halftime score.

Quality regained the lead four minutes into the second half when Cabreza followed up on a shot from Surber that initially brought out Lady Strykers keeper Sonja Sanchez. Three minutes later, Surber scored her third goal after connecting on a Ramirez goal throw for the 5-3 advantage. The Lady Strykers kept it close when a Barbe shot from a Pangelinan pass clipped Quality’s lead to just one goal.

Two minutes later, Jamie Soriano extended Quality’s lead again with a shot from the right side that just rolled under Sanchez’s extended leg in the goal. Alisia Barcinas and Surber added two more goals for Quality midway through the half for the commanding 8-4 advantage.

Mia Santos tacked on a goal for the Lady Strykers’ off a pass from Barbe with less than four minutes on the clock, but time expired before the teams were able to score more.

In the consolation match, the dck Masters, after having taken Quality to overtime in the semifinals, edged the Doosan Lady Crushers 3-2 to officially take third place in the league. Rhoda Bamba scored twice for the Masters and teammate Pauline Toves added on in the victory. Kattie Mills scored both of the Lady Crushers’ goals. 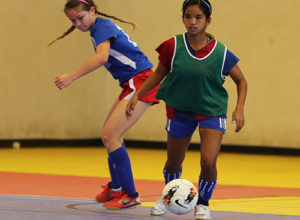 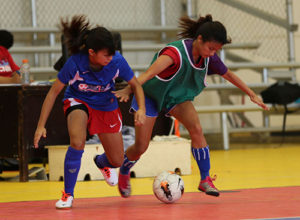 Quality Distributors’ Alisia Barcinas (left) tries to get in front of the Paintco Lady Strykers’ Francesca Pangelinan to get the ball during the championship game of the 2013 Bud Light Women’s Futsal League at the Guam Sports Complex gym. Quality defeated the Lady Strykers 8-5. 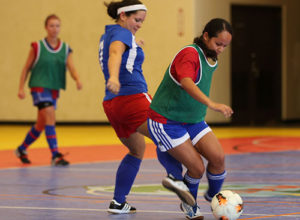 The Paintco Lady Strykers’ Alexy Barbe gets around the defense of Quality Distributors’ Jodie Barnhouse during the championship game of the 2013 Bud Light Women’s Futsal League at the Guam Sports Complex gym. Quality defeated the Lady Strykers 8-5. 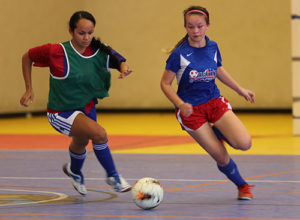 Quality Distributors’ Paige Surber races toward the goal as the Paintco Lady Strykers’ Alexy Barbe keeps pace with her on defense during the championship game of the 2013 Bud Light Women’s Futsal League at the Guam Sports Complex gym. Quality defeated the Lady Strykers 8-5. 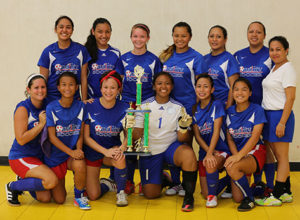