Rovers Masters’ Ian Lawton scored twice in his team’s 6-1 win over Hyundai Family FC in the teams’ final fixture of the season Jul. 28 to take the league’s Golden Boot Award with 11 total goals for the season. Lawton finished ahead of Hyundai’s Se Lim and Big Blue Masters James Campbell, who both finished with nine goals scored in the regular season.

Rovers Masters’ David Drews earned the league’s Golden Glove award as top goalkeeper with the least goals allowed in the most minutes played.

Enrique Interian also added two goals to his team’s six-goal haul in the second half against Hyundai and teammates Anjelica Perez and Courtney Salgado chipped in one each. Salgado finished with five goals for the season, the most by any female player for the 2017 league.

Bank of Guam Strykers Masters shut out Gino’s 2-0 with one goal each from Shawn Gumataotao and Joel Punzalan.

The playoffs, set for Friday evening, will pit No. 1 Rovers Masters against No. 4 Hyundai Family FC at 6 p.m. followed by No. 2 Big Blue Masters taking on No. 3 United Masters at 8 p.m.

The winners of the two matches will play for the championship Aug. 11. NAPA Rovers Masters’ Anjelica Perez looks for a teammate to pass the ball to as Hyundai Family FC players begin to converge on her in a Week 7 match of the Red Dragon Sports Co-Ed Masters Soccer League Friday at the Guam Football Association National Training Center. Rovers Masters won 6-1. 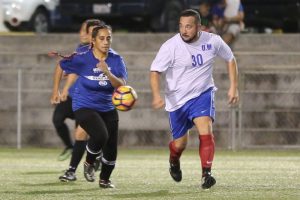