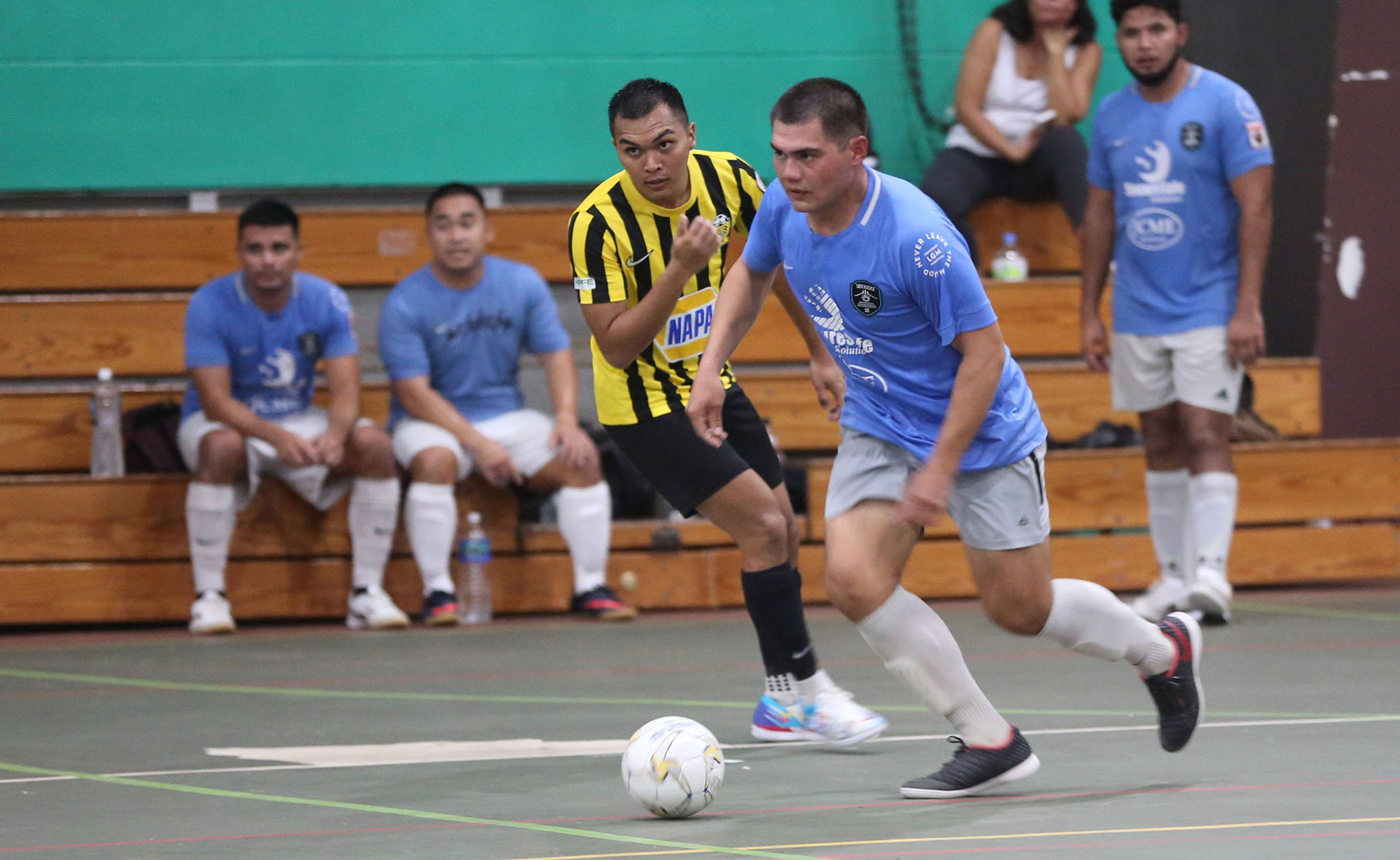 [August 17, 2022 – Harmon, Guam] A new champion will be crowned in the Budweiser Men’s Futsal League, with league playoffs beginning Monday evening at the Astumbo gym.

The undefeated Islanders FC finished at the top of Bracket A with an 8-3 win over the Bank of Guam Strykers on Aug. 15, led by Justin Cruz’s five goals. Shinsuke Uejima scored twice in the win and Takefumi Inoue also scored. E.J. Manibusan, Ian Mariano, and Joseph Connelley scored for the Strykers.

The Strykers’ loss dropped the team to third place in bracket standings, with the 2021 titleholders missing the 2022 playoffs.

Finishing in the second-place spot in Bracket A and advancing to the playoffs with the Islanders FC is Quality Distributors FC after the team’s 5-1 win over Mosa’s on Aug. 11. Andrew May led all scorers with two goals and teammates Isaac Koech, Evan Cooney, and Aleksei Ruchkovskii scored one each. Riley Jones-Taijeron scored Mosa’s lone goal in the contest.

In other Bracket A regular season matches, the Bank of Guam Strykers defeated the Orange Crushers 11-4 on Aug. 11 led by Morgan McKenna’s double hat trick. Ian Mariano finished with a hat trick in the win and Jehn Joyner scored the team’s other two goals. Tristin Guile scored twice for the Crushers and teammates Justin Samonte and Ray Macias also scored.

The top two teams from Bracket B faced off in the group’s final regular season match with the undefeated NAPA Rovers FC winning 4-2 over the Sidekick SC on Aug. 15. Shaun-Paul Martinez scored twice for the Rovers FC and teammates Yvan Tcheugoue and Yaw Boateng also scored. Kyle Leon Guerrero and Kristian Cruz scored for the Sidekick SC.

League playoffs begin Monday with Bracket B No. 2 Sidekick SC taking on Bracket A No. 1 Islanders FC at 7 p.m. at Astumbo gym, followed by Bracket A No. 2 Quality Distributors playing against Bracket B No. 1 NAPA Rovers FC at 8 p.m. Winners of the playoff matches will move on to the 2022 championship match and the losing teams will play for third place. The championship and consolation matches will be played at the Astumbo gym Aug. 25. 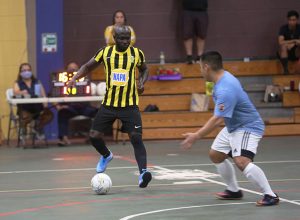 NAPA Rovers FC’s Yaw Boateng looks for options as he stays in control of the ball against the Sidekick SC during a regular season match of the Budweiser Men’s Futsal League at the Astumbo gym Aug. 15. The Rovers won 4-2. Photo by Samantha Bautista / GFA 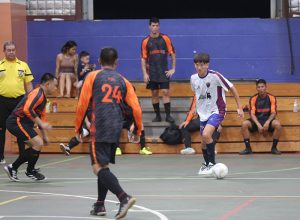 Bank of Guam Strykers FC’s Samuel Stenson looks for options against the Orange Crushers FC in a regular season match of the Budweiser Men’s Futsal League on Aug. 11 at the Astumbo gym. The Strykers won 11-4. Photo by Samantha Bautista / GFA 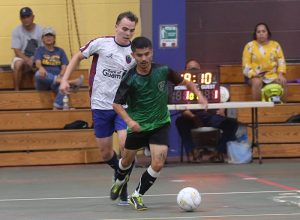 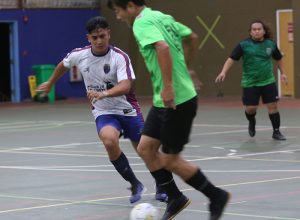 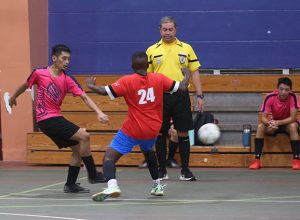 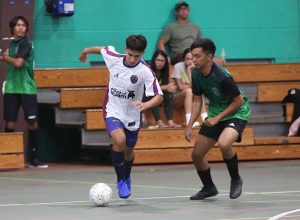 Bank of Guam Strykers FC’s E.J. Manibusan attempts to work around the defense of Islanders FC’s Joshua Bamba in a regular season match of the Budweiser Men’s Futsal League on Aug. 15 at the Astumbo gym. The Islanders won 8-3. Photo by Samantha Bautista / GFA