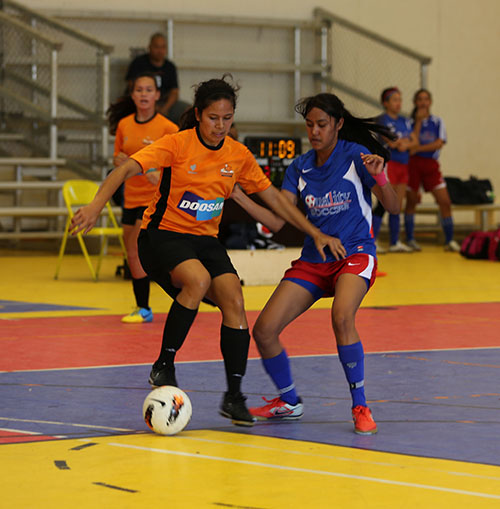 The Paintco Lady Strykers moved up to the first place spot in the 2013 Bud Light Women’s Futsal League standings as a result of two draws – including the team’s 4-4 draw with Hyundai – in Week 4 action at the Guam Sports Complex Gym in Harmon.

Hyundai held a slim 3-2 lead at the halftime whistle until a goal from the Lady Strykers’ Alexy Barbe just two minutes into the second half knotted the contest. An Ashley Besagar goal for Hyundai just five minutes later put her team back in the driver’s seat, but the team could not contain the Lady Strykers’ Kim Sherman in the final 10 minutes of play forcing the draw.

Krystiana Martinez and Sheena Borja scored the Lady Strykers’ other goals. Besagar finished with two goals and teammates Jena Cruz and Shana Spindel added one each for Hyundai.

In the final game of the day, Quality Distributors clawed back from a five-goal deficit in the first half to salvage a 9-9 draw with the Doosan Lady Crushers. The day’s second draw forced a three-way tie for first place in league standings based on points. Per league rules, the Lady Strykers’ 10-goal differential for the season put them in first, followed by Doosan Lady Crushers with less goals allowed for the season over Quality in third.

The Lady Crushers looked to be cruising to a victory with the 8-3 advantage by the halftime whistle, but Quality continued to chip away at the lead in the remaining 25 minutes of the match. Nieves Cabreza sparked the Quality run with two unanswered, back-to-back goals within 30 seconds of each other, including one she flicked back with her heel from a kick-in. The Lady Crushers’ Colleen Naden stalled the momentum for a bit with a goal in the half’s third minute, but the league’s current Golden Boot race leader Paige Surber answered back two minutes later.

After almost 14 minutes of scoreless futsal, Quality’s Kayla Kinney scored both of her goals within 40 seconds to bring the game score to 9-8. A foul in the arc with just three seconds left in the contest put Paige Surber behind the ball on a penalty kick, which she successfully shot to salvage the draw. The Lady Crushers’ Anjelica Perez led her team with four goals. Skyylerblu Johnson completed a hat trick and teammates Maria Abbey Iriarte and Colleen Naden each scored once. Surber finished with four goals and Cabreza finished with a hat trick.

In the day’s other game, the dck Masters survived a scare to defeat the University of Guam Tritons 4-2. Despite playing one-woman short for over 15 minutes, UOG managed to take a 2-1 lead at halftime behind a pair of goals from Simie Willter.

After a goal from the Masters’ Alyssa Benito 13 minutes into the second half leveled the match, it wasn’t until the final two minutes of the game that Rhoda Bamba scored twice to give the Masters the victory. Women’s futsal action continues Sunday when the Lady Strykers take on UOG at 1 p.m. at the Guam Sports Complex Gym. Hyundai faces the Lady Crushers at 2 p.m. and Quality plays Pika Soccer Club at the 3 p.m. time slot.

Admission is free to watch the matches. 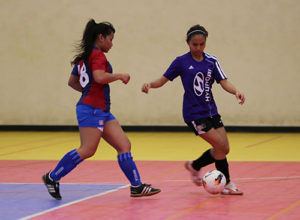 Hyundai’s Honoka Recella controls the ball as the Paintco Lady Strykers’ Sheena Borja approaches her on defense during a Week 4 match of the 2013 Bud Light Women’s Futsal League. Hyundai and the Lady Strykers battled to a 4-4 draw. 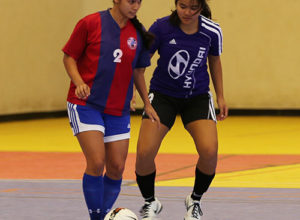 The Paintco Lady Strykers’ Alexy Barbe looks to pass the ball as Hyundai’s Demi-Rae Shimizu looks for an opportunity to steal the ball during a Week 4 match of the 2013 Bud Light Women’s Futsal League. Hyundai and the Lady Strykers battled to a 4-4 draw. 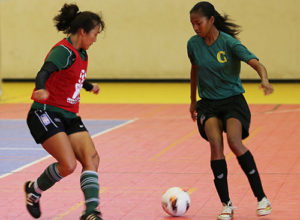 University of Guam Tritons’ Simie Willter makes a quick turn right to try to get around the defense of the dck Masters’ Kyung Shipman during a Week 4 match of the 2013 Bud Light Women’s Futsal League. The Masters defeated UOG 4-2. 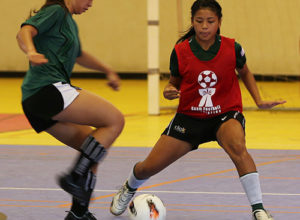 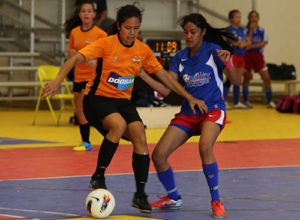 The Doosan Lady Crushers Anjelica Perez keeps Quality Distributors FC’s Nieves Cabreza away from the ball during a Week 4 match of the 2013 Bud Light Women’s Futsal League. Quality salvaged a 9-9 draw with the Lady Crushers. 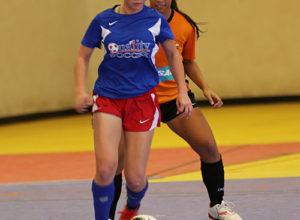 Quality Distributors FC’s Paige Surber looks for an opportunity to turn toward the goal as the Doosan Lady Crushers’ Maria Abbey Iriarte marks her on defense during a Week 4 match of the 2013 Bud Light Women’s Futsal League. Quality salvaged a 9-9 draw with the Lady Crushers.