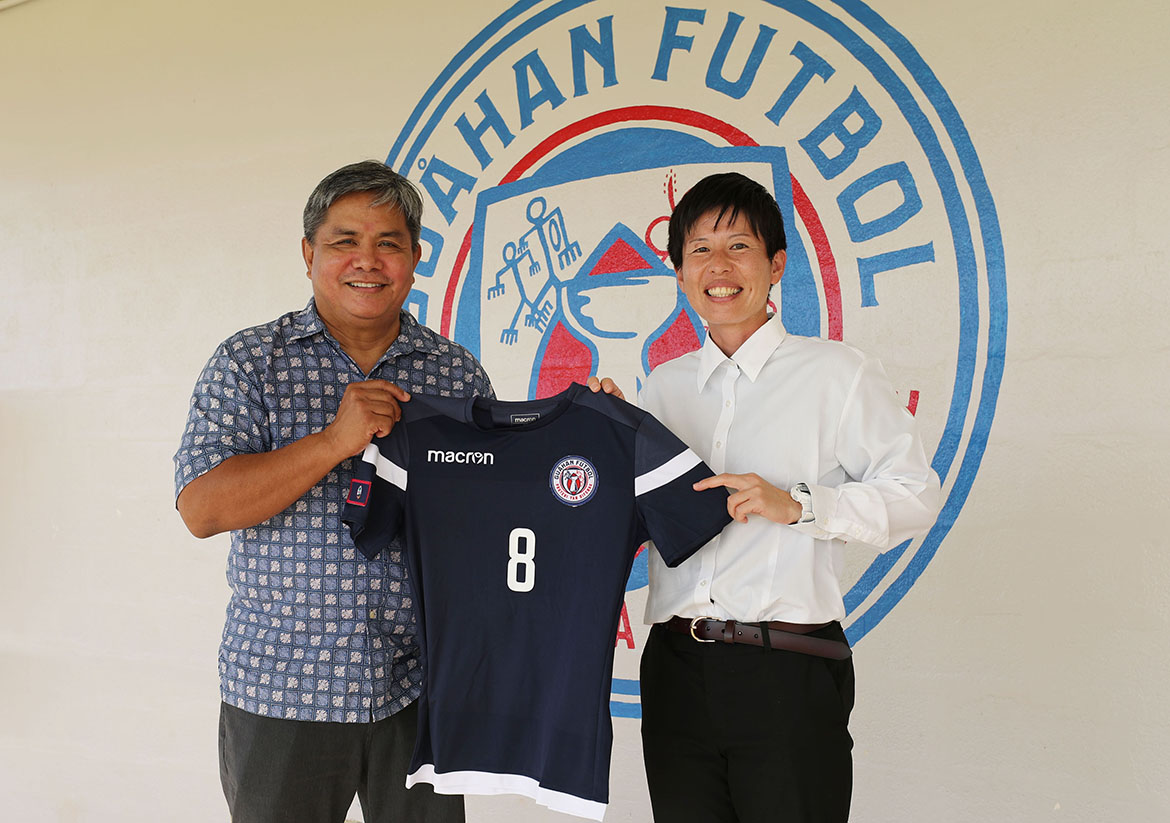 “East Asia, and Japan in particular, has a very strong women’s football program and we are fortunate to have one of Japan’s top coaches at the helm of Guam’s national team, while also working to further develop our overall women’s football program,” said Valentino San Gil, GFA President. “This new appointment, which took many months to formally finalize, will greatly benefit our players, coaches, and volunteers in continuing to grow the women’s game here in Guam. I look forward to seeing the progress made in the upcoming years, as well as increased competitiveness by our girls and women’s national teams in international football.”

According to Japan Football Association, Ogura is among the top 0.8% of all female coaches in Japan. Ogura previously was a coach at the Hiroshima Prefecture Girls U15 Training Center and for club team Angeviolet BINGO Hiroshima’s U15 Girls squad. Additionally, Ogura also previously served as a coach for the U16 Fukushima Prefecture Girls Selection team and as an Assistant Coach for the U15 Japan Women’s Selection squad. Overseas, Ogura spent two years in Kenya as a Japan International Cooperation Agency volunteer. She served as a Physical Education teacher and utilized football in her education curriculum in the African country.

“To start off, I would like to immerse myself in my new environment here in Guam and learn about the climate, the culture, and the people,” Ogura said through a translator. “Then, in order to prepare for the upcoming EAFF E-1 Football Championship 2022 Round 1, I would like to learn the status of the Guam Women’s National Team, get to know all the players, and find out what kind of football Guam can show on the pitch. In the long term, I’d like to see Guam participate in the Olympics and the World Cup, compete on equal footing with top teams in the world, and for the team to eventually be led by local staff.

“My goal as a coach is to create a football philosophy that transcends language and cultural barriers, and to become a coach who is recognized and supported by people all over the world. I want to dedicate myself to Guam football as long as I can, always keeping in mind that the players come first as they are the true stars of the game,” Ogura added.

Most recently, a fairly young Masakåda squad competed in the AFC Women’s Asian Cup India 2022 Qualification Round in Bishkek, Kyrgyz Republic, returning to the continental tournament for the first time in over 18 years. The team was made up mostly of top players from Guam’s domestic talent pool and a few others residing in the US who were able to commit to the 10-day tournament in the Central Asian country under interim Head Coach Ross Awa.

The next tournament for the team is the EAFF E-1 Football Championship Women’s Competition Preliminary Round tentatively scheduled for the first part of 2022. The 2021 edition of the tournament was scheduled to begin Round 1 matches in the summer of 2020, but was suspended due to the COVID19 pandemic. After a two-year hiatus, EAFF plans to resume the region’s flagship tournament beginning next year. Guam is a two-time champion of the tournament’s first round, winning in 2014 and 2016.
Ogura said she takes the appointment as Head Coach seriously and with great appreciation for GFA’s confidence in her ability.

“Not everyone can experience being a Head Coach for a national team in their life,” Ogura said. “Football as always been a part of my life and it has taught me the importance of taking on challenges in a positive way. Guam has great potential, as it has a special connection to the United States, a major powerhouse in Women’s Football.
“Nevertheless, they chose to ultimately invite a Japanese coach to be part of their team, especially despite all the challenges imposed by COVID19, which meant a lot to me. Therefore, I decided that I wanted to do my best in order to bring joy to the GFA and all the people of Guam (through the success of women’s football),” Ogura added.
Ogura earned a degree in Health and Sport Sciences from Osaka University, while also playing football for the university. After completing her university studies, Ogura played for the YKK AP Tohoku Ladies SC Flappers, later changing its name to the Tokyo Denryoku Ladies SC Mareeze (TEPCO Mareeze), in Division 1 of the Nadeshiko League. The Nadeshiko League was Japan’s top flight semi-professional league before the establishment of the current Yogibo WE League, Japan’s first fully-professional women’s football league, founded in June 2020.