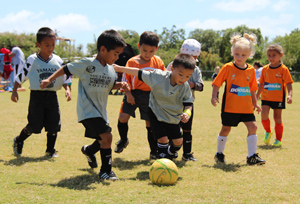 In an instance when play was temporarily stopped after a Lil’ Bombers player went down, the Sidekick SC’s Andrew Unpingco kicked the ball to the Lil’ Bombers keeper in the ensuing drop kick in a U14 match. Moments later, the Lil’ Bombers’ Olivia Whitaker did the same when the situation was reversed. One of the match referees, Maria Abbey Iriarte, issued both players a Fair Play with Triple J green card to reward them.

“They didn’t have to give the ball back to the opposing team on the drop kick, but they did anyway without hesitation,” Iriarte said after the match. “I gave them both green cards for their fair play actions.”

Another referee, Simie Willter, rewarded the Wolverines U17 player Jordan Rosario with a green card in his team’s match against the Strykers. After Willter called for a goal kick believing the last touch on the ball was from a Strykers’ player, Rosario admitted to Willter that he touched the ball last before it went out and had Willter change her call to a corner kick for the opposing team.

“I’m still learning about the (Fair Play with Triple J) initiative, but I think it’s great for the players,” said Jenn Flory, a U6 and U8 coach for Tumon Soccer Club. “Rewarding good sportsmanship and fair play during matches helps to reinforce good values that the young athletes have learned and will use throughout their lives.”

In other matches, Ray Macias, Daryl Damian and Michael “Jake” Benito scored in the Wolverines 3-0 win over the Strykers.

In Week 6 U14 matches, Tyler Presto, Masaki Spence, and Bradly Lubas scored in the Wings’ 3-0 win over the Islanders.

Sam Larkin scored twice and teammate An Truong added another in Quality’s 3-1 win over Dededo. Diether Messner scored for Dededo.

Noah Camacho scored all five goals for the Wolverines in the team’s 5-2 win over Strykers Blue. Neil Ericsson and Dayton Damian scored for the Strykers Blue.

In the U12A division, a pair of goals from twins Matthew and Mark Iseke and one from Kyle Halehale helped the Wings to a 5-3 win over the Tigers. James Lee scored three for the Tigers.

All Fair Play with Triple J green card recipients will be entered into a weekly drawing for a Kia FIFA World Cup soccer ball. A photo shoot of each week’s winners will be held at 12 noon the following Saturday at GFA.

The Southern Cobras and the Orange Crushers play in a Week 6 U6 division match of the Triple J Auto Group Robbie Webber Youth Soccer League at the Guam Football Association National Training Center. 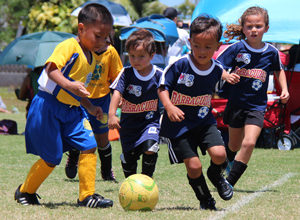 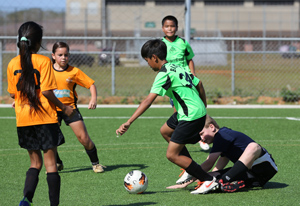 The Islanders’ Joshua Bamba keeps the ball out of reach from the Orange Crushers goalkeeper, as Bamba attempts to turn and shoot in a Week 6 U12A division match of the Triple J Auto Group Robbie Webber Youth Soccer League at the Guam Football Association National Training Center. 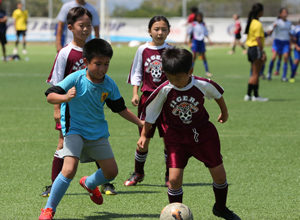 Tigers defenders close in on the Sidekick SC’s Riley Rama to prevent him from scoring on a corner kick play during a Week 6 U10A division match of the Triple J Auto Group Robbie Webber Youth Soccer League at the Guam Football Association National Training Center. 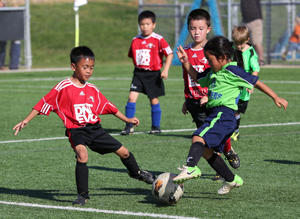 The Wings and the ASC Trust Islanders play in a Week 6 U8 division match of the Triple J Auto Group Robbie Webber Youth Soccer League at the Guam Football Association National Training Center. 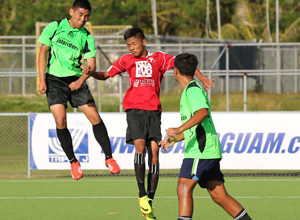