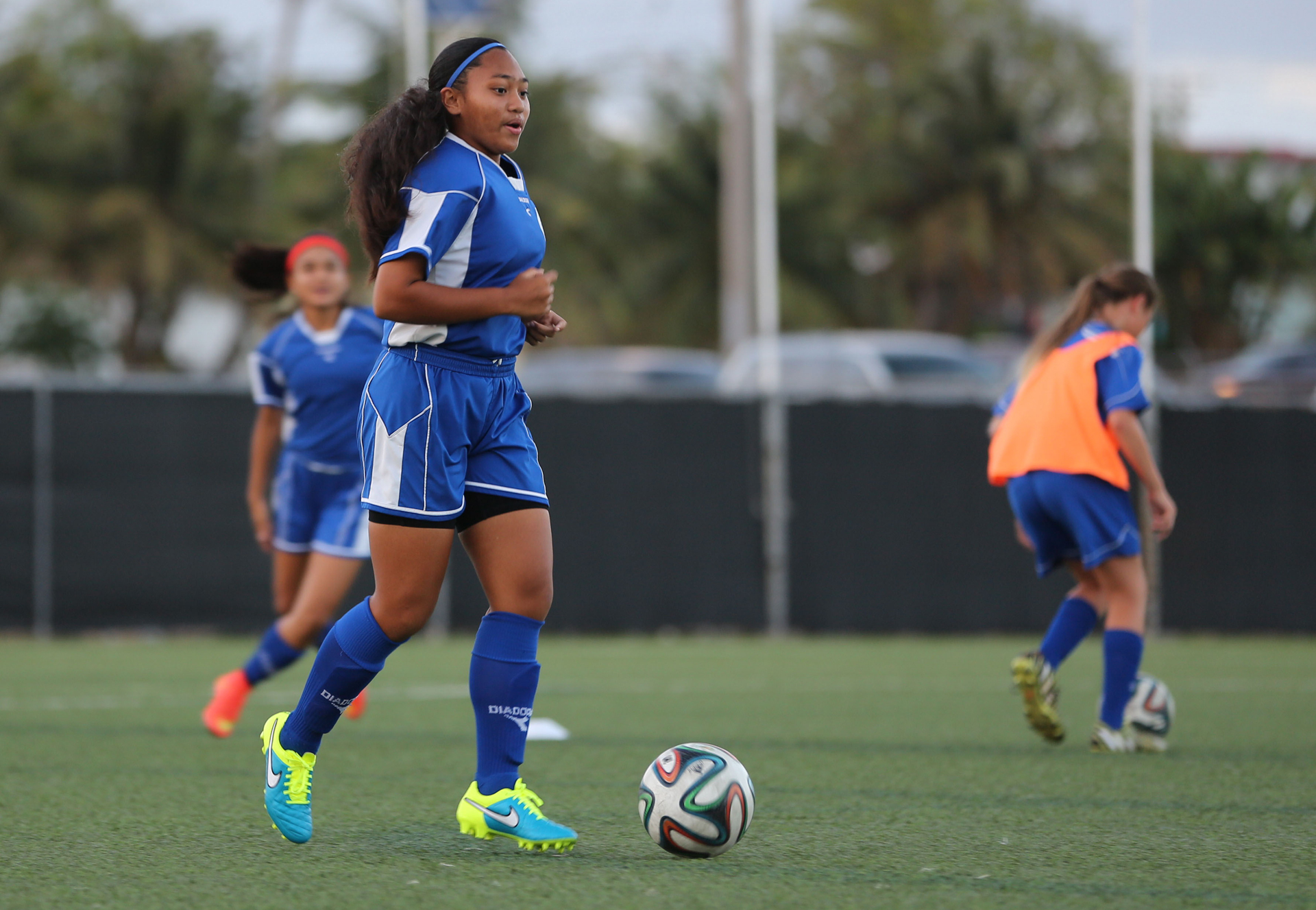 [Beijing, China – May 17, 2016] – The Mini Masakåda are on the right path to qualifying for the playoffs of the AFC U14 Girls Regional Championship in Beijing, China P.R. for the first time following a 1-0 opening day win over Hong Kong in Group B play Tuesday.

“The girls wanted to start out strong in the tournament and against a team they had faced a month earlier, they also wanted to see how much progress they’ve made the last few weeks leading up to the AFC tournament,” said Ashley Besagar, Mini Masakåda head coach after the match.

“We’re definitely proud of our accomplishment, but we still have to remain focused, especially with stronger opposition ahead of us.”

Guam’s U14 girls team exacted revenge on their regional rivals after a 2-0 loss in the Jockey Club Girls International Youth Invitational Football Tournament about one month ago. The team next plays DPR Korea Wednesday.

“Seeing the competition in that tournament in Hong Kong last month, we knew how much harder we needed to work,” said Jinae Teria, who scored Guam’s goal in the win against Hong Kong in the AFC tournament, via telephone from China. “We were familiar with the (Hong Kong) players, who to mark on defense, but overall, we all played well as a team, a unit today.

“Every team we’ll play will be tough. Against DPR Korea (Wednesday), we’ll need to prepare as a team and individually, sleep well, eat right and be focused. For (Wednesday) and any other match we play here, we’ll need to play our hardest, imagine it’s the last game we’ll ever play – just put everything on the line, because we’re not only playing for ourselves, we’re playing for Guam,” added the Luis P. Untalan Middle School seventh grader, who plays for the Sidekick SC in the Triple J Auto Group Robbie Webber Youth League.

Teria scored Guam’s goal off a free kick from teammate Minami Rabago in the first half. After Rabago’s kick, Hong Kong’s goalkeeper came out of her box, and as Teria advanced to the ball, she found a window of opportunity for a quick shot under pressure by both the goalkeeper and the Hong Kong defender marking her.

From that moment and after the match, Teria’s teammates have come up with a new nickname for the Mini Masakåda striker – “La Niña” – a play on “El Niño,” a nickname given to Fernando Torres from professional Spanish club Atlético Madrid. Before the match, Teria was encouraged to watch highlight videos of the Spanish striker as a youth player and current highlights of goals scored, taking note of how to handle certain game situations as a striker. Teria watched one clip where Torres scored a goal in a situation similar to the goal-scoring opportunity she managed to finish, she said.

“We are so proud of the team for their win,” said Gary White, Guam Football Association Technical Director. “After a discussion with the coaches, the team had more possession during the match and won utilizing Guam’s established playing style outlined in our technical guide. I couldn’t be any happier for them and look forward to the upcoming matches.”

Guam was drawn into the tournament’s Group B with Chinese Taipei, DPR Korea, and Hong Hong Kong. Group A consists of host country China, P.R., Japan, Korea Republic, and Northern Mariana Islands. Only the top two teams from each group advances to the tournament’s playoff round to determine the East region champions.