Matao train in Osaka, will play in I.R. Iran 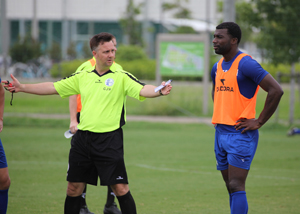 08 Mar Matao train in Osaka, will play in I.R. Iran

Posted at 06:54h in Matao Tournaments, Men's: Matao by admin

[August 31, 2015 – Osaka, Japan] After a weeklong training camp in Osaka, Japan, the Matao will depart this evening for Tehran ahead of their 2018 FIFA World Cup Russia and AFC Asian Cup UAE 2019 Joint Qualification Round 2 match with I.R. Iran on Thursday.

With all the players now in camp after the arrival of LA Galaxy defender A.J. DeLaGarza yesterday the team and staff are fully focused on what is likely to be the biggest challenge the side has faced in many years.

Head Coach Gary White said the training camp was of immense benefit and he already feels that there is a new intensity amongst the playing group.

“Right from the moment that the first of the local players arrived here in Osaka I’ve noticed there’s a real edge to how they have gone about their preparation,” White said. “That only increased after the arrival of the overseas-based boys and we’ve had a solid week of work.”

While the beginning of the camp was focused on recovery and conditioning work, led by the team’s new Head of Sports Science, Andrew Young, the latter stages have been heavily centered on tactical preparation with the side also playing a local college team to help implement some of the ideas White has been working on in training.

“That match was not about the result but all about how we want to play,” White said. “We had the team mirror how we think Iran will be likely to play and we’re very appreciative of them working with us and also to a close friend of mine who spoke to the team beforehand, former Japanese national captain Tsuneyasu Miyamoto.

“We know the size of the challenge we are faced with, up against a team that has won several Asian Cups and which has been a regular qualifier for World Cups. That’s the position that we want to put ourselves in, that’s where we want to be and with the full support of everyone at the GFA we are working towards that common goal,” White added.

That backing has extended to the recent appointment of Young, a highly-regarded sports scientist, who has previously worked with the Australian national team and English Premier League clubs Fulham and Blackburn.

As White explains he has brought a new edge to the team.

“We’ve never really had someone like Andrew before and he has immensely helped our preparation,” White said. “Thanks to his contacts at GPS Sports he has brought a GPS unit for every member of the squad and he collates individual and group-based data on a daily basis which has really helped us with injury prevention and conditioning.

“In conjunction with the rest of my staff, who have been as always first class this is a real team effort from everyone both here and back in Guam as we face a huge challenge in Tehran,” White added.

The 20-man squad is set to depart Kansai Airport on Monday night and arrive into the Iranian capital on Tuesday morning, local time.

Tickets still are on sale for the Sept. 8 match against Oman at the GFA Main Office. The office is open Monday to Saturday from 10 a.m. to 7 p.m. For information, call 637-4321.