Matao to play final match of EAFF tourney vs Mongolia 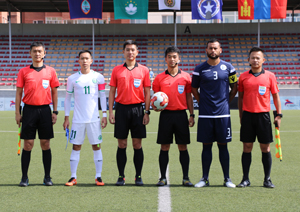 [September 9, 2018 – Ulaanbaatar, Mongolia] With Guam-based players and staff on the Matao roster returning home from international duty Saturday, wheels are in motion for performance assessments and plans for improvements for future tournaments.

“The (training) camp and the EAFF tournament was a step in the right direction after not playing competitively for over 18 months,” said Karl Dodd, Matao Head Coach. “The rejuvenation of the squad and the implementation of the new playing style and culture are taking place, and as coaching staff, we are very happy with their progress. The players have really galvanized as a group on this trip and created a work environment that will allow us to continually grow as a team.

The belief is there and now we need to continue being brave and playing football – I believe we made a lot of friends and admirers and also gained a lot of respect in the football community by trying to play football in the right manner.

“We go home now, take a short break, and then step up preparations for the AFC Asian Cup and FIFA World Cup qualifiers next year. The highlight of this trip was the debut of Devan Mendiola, Ryan Quitugua, Isiah Lagutang, and 16-year-old Kyle Halehale,” Dodd added.

For the majority of the tournament’s final match, Guam and Mongolia were level at 0-0 with both teams’ defenses stepping up on both ends of the pitch. In the 89th minute, Guam debutant Devan Mendiola punished Mongolia with close-range shot as two defenders tried earnestly to clear the ball, while also trying to hold back the Guam winger.

In stoppage time, Mongolia managed to find the equalizer off of a quick counterattack with seconds left to play, forcing the Matao to heartbreakingly settle for the final 1-1 draw. With the draw, Mongolia advanced to the tournament’s second round, set for November in Chinese Taipei.

“The feeling throughout the tournament was high spirits, anxiousness, excitement,” said Shawn Nicklaw, Matao captain in the tournament. “We are a new, young group with a great balance of experienced players on the team, all helping to lead the team in the right direction. We were unfortunate to not proceed to the next round of the EAFF tournament, but I think overall as a team, we made a great foundation in terms of how we want to play total football. It’s definitely a step in the right direction leading into the upcoming AFC Asian Cup and FIFA World Cup qualifiers.

“After being out of competitive competitions for over a year, it was great to be back with this new group. With preparation in Japan leading into the EAFF tournament, there was this buzz around the group. We are a new, hungry team wanting and learning more from our new way of thinking, playing style, to creating a new culture within the group. With that said, we have some very talented young players making a huge impact on the team and tournament. The future is very bright for Guam and the Matao. That’s all credit to Karl (Dodd) and the rest of his staff with what they have done for the island in the short period of time they have been with us.”

Mendiola and teammate Marcus Lopez each scored twice in the tournament. Jason Cunliffe also scored for Guam, with his shot coming against the Northern Mariana Islands.