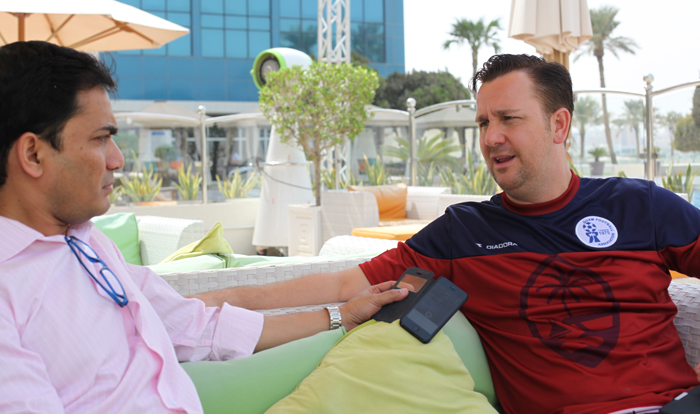 Posted at 07:36h in Matao Tournaments, Men's: Matao by admin

[October 8, 2015 – Doha, Qatar] Guam went from the classroom to the training ground in Qatar today as preparations are now in full swing for next week’s FIFA World Cup qualification match with Turkmenistan.

The afternoon was spent in a series of meetings going over the style that Guam wants to employ next Tuesday before hitting the Al Wakrah stadium in the early evening to put those ideas into practice, with the results delighting the side’s coach, Gary White.

“Yesterday we did a real physical session so today was more about working on our shape and it was really pleasing for me to see the players take on board what we did in the theory meeting and take those ideas from the blackboard to being reality on the pitch.”

With Guam on a bye this week as the other 4 nations in Group D squared off – with Turkmenistan beating India 2-1 and Oman and Iran drawing 1-1 – White is happy with the side’s progression.

“The players are starting to link well and move as a team; they’re becoming more dynamic as a unit and starting to see the rhythm and tempo of our style of play and they’re doing it with a fantastic attitude and enthusiasm.”

The squad went straight from training to the Al Sadd Stadium where they were guests of honor of the Qatar Football Association, as the host nation took on China in another World Cup qualifier, which the locals won.

Tomorrow is a recovery day for the Matao ahead of their departure for Ashgabat on Sunday.