Matao forced to 1-1 draw with Laos 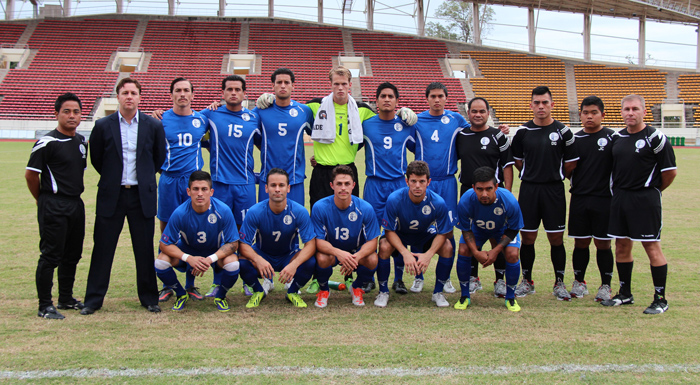 Posted at 05:45h in Matao Tournaments, Men's: Matao by admin

Stadium spectators were treated to a faster pace of Guam’s playing style as the Matao dominated the second half in the team’s 1-1 draw with host country Laos at the National Stadium KM16 in a FIFA international friendly match Saturday.

“Laos is a very good team – they’ve had some good results recently,” said Matao head coach Gary White. “For us, it’s our first game together with the new additions. It took us 45 minutes to really gel and at the same time, we did not concede a goal, which shows a lot of the maturity of the players we now have on the team. In the second half, we had various opportunities to score goals, which we should have finished, and the pressure on Laos continued. We broke them down and scored in the 90th minute.

“We have to fix the end product – missing too many opportunities, giving the ball away too easily – all of which are easily fixed with the players we have. We’re now looking forward to Cambodia, which we’re looking to go in and win the game,” White added.

Laos’ Soukaphone Vongchiengkham broke the scoreless deadlock with a penalty kick about 15 minutes into the second half after Laos referee Phongsanit Xaypaseuth booked Guam’s Travis Nicklaw on a controversial foul in the box. Down 1-0, the Matao turned up the intensity with a variety of shot attempts, including a few from Ryan Guy that went just wide and headers from captain Jason Cunliffe off crosses. One of Cunliffe’s attempts hit the crossbar, keeping Laos on its back foot for the majority of the half. The Matao later forced the draw with a Cunliffe penalty kick after he was yanked down by a Laos defender in the box on a Guam corner kick play.

“It was a fair result,” Cunliffe said. “We outplayed them for most of the second half and had a number of chances – I hit the crossbar on a header. All things considered, we’ll take the point (from the draw). I think the boys played well – it’s our first time playing together with the new guys, like (Erik) Ustruck and A.J. (DeLaGarza). “Moving forward, it’s good for Guam football – it’s definitely something to build on. We can take some good things from this match and be confident moving forward – it’s always going to get better. We have Cambodia in a few days. We can work out the kinks for then and move on,” the Tamuning resident added.

The Matao will next play Cambodia in another FIFA international friendly match in Phnom Penh at 4 p.m. Cambodia time Tuesday, to cap its November Southeast Asian tour.

DeLaGarza, a star defender for the L.A. Galaxy, one of the MLS’ most decorated clubs, will stop over in Guam for a few days before heading back to Los Angeles. DeLaGarza will be making appearances at the Guam Football Association National Training Center over the weekend.