Matao begin training in India ahead of World Cup Qualifier 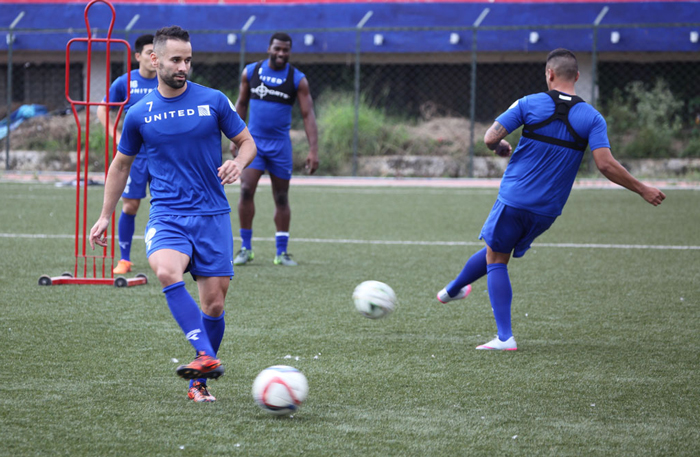 [November 8, 2015 – Bangalore, India] The bulk of the Matao squad has arrived in Bangalore ahead of Thursday’s 2018 FIFA World Cup Russia and AFC Asian Cup UAE 2019 Preliminary Joint Qualification Round 2 match with India in a confident mood that they can get the job done against the Blue Tigers.

With Iran, Turkmenistan and Guam all sitting within a point of each other in the race for final round World Cup qualification places there is plenty at stake in the southern Indian city.

After Indian captain Sunil Chettri claimed in the buildup to the match that Guam ‘aren’t that good’ the squad is determined to make the forward regret those words.

“With all due respect to India’s most successful football player not only did we defeat India when we last met but we also won with style and domination,” said Guam head coach, Gary White.

“Talk is cheap and it’s naïve to battle with words when the game is played on the pitch, you’ll see exactly again what my players are about during this game, we do not pick and choose when we want to give effort, this is a standard requirement to put on a Matao shirt”

The side completed their first full training session on Sunday evening at the Bangalore Football Stadium where they looked fresh as they completed a series of passing drills and small-sided games.

“This is the sharpest I’ve seen the players on their first day in camp throughout the whole campaign.”

“The group now knows exactly what they need to do, they’ve prepared well at their respective clubs and I’m really excited about where we’re at, and where we’ll be come game-time.”

The squad has been well received by local fans with several dozen gathering to watch Sunday’s training session and giving the side a round of applause as they left the pitch with anticipation building ahead of Thursday’s match.

Following the Nov. 12 fixture in India, the Matao will return to Guam to play against Asia’s No. 1-ranked country, I.R. Iran at the Guam Football Association National Training Center on Nov. 17. The home match will kick off at 3:30 p.m.

Tickets are on sale at the GFA Main Office daily, with VIP tickets at $25 each, Category 1 and 2 tickets at $20 each, and General Admission tickets at $10 each.

Story and photos by Scott McIntyre