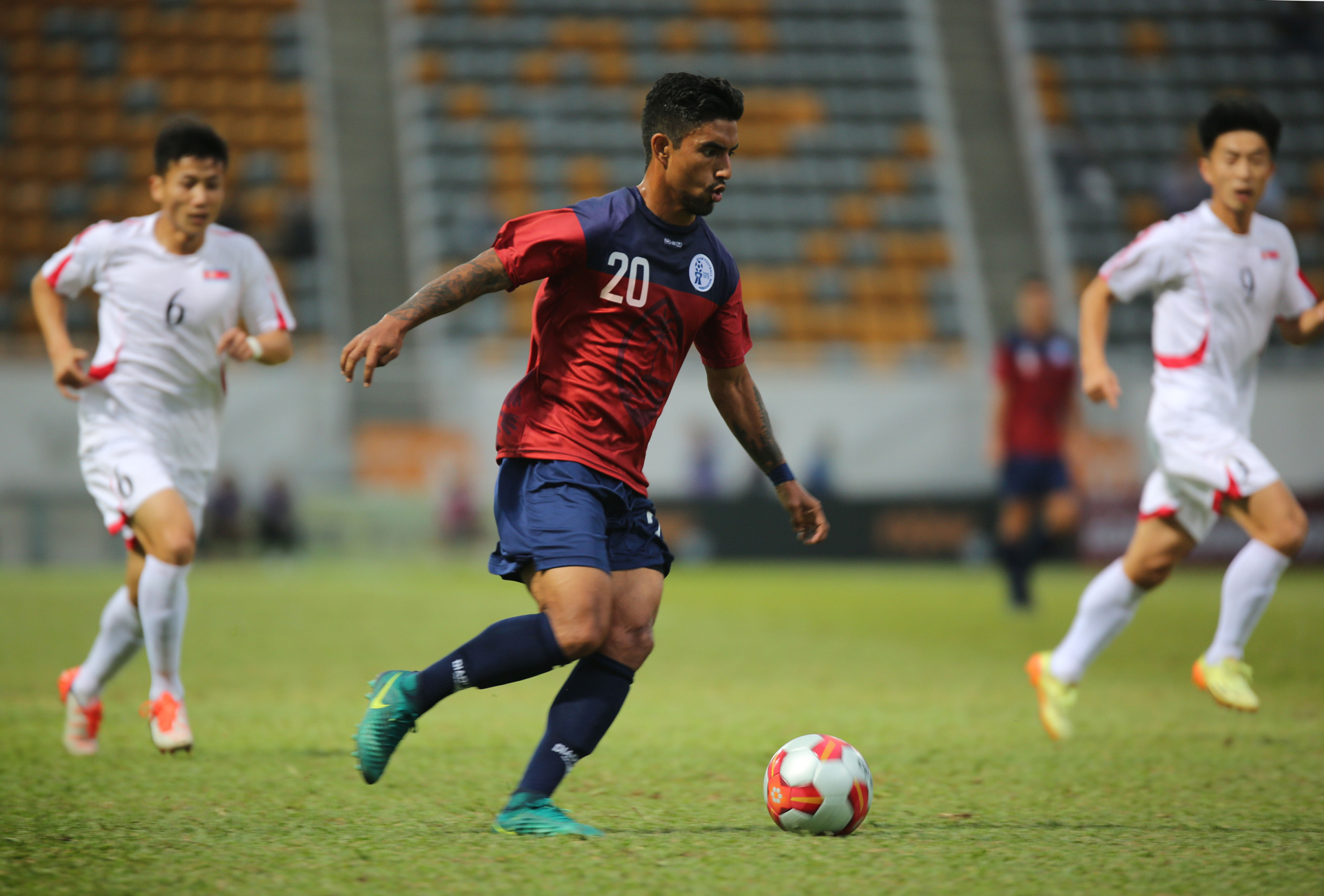 As it stands, Guam has the edge over Chinese Taipei in the tournament’s standings after Day 2 matches based on goal differential, with Guam’s narrow 3-2 loss to Hong Kong on opening day of the men’s competition and a heartbreaking 2-0 loss to DPR Korea Wednesday evening, the smallest scoring margin between the two sides to date.

“I’m proud that the guys fought and that they’re learning – they’re better today than they were two days ago,” said Darren Sawatzky, Matao head coach, during the post-match press conference following the team’s match against DPR Korea. “Our goal is always to win games. That’s what you do at this level so we expect to go out and beat Chinese Taipei (on Saturday).”

In Guam’s match against DPR Korea, the Matao played a highly organized, explosive brand of football that kept the North Koreans off their game for close to 70 minutes. Guam’s opponents patiently worked to counter the Matao’s attacking plays and were rewarded in the 67th minute after So Hyon Uk managed to connect on a volley in a high-pressure situation near the goal box. Later, Pak Kwang Ryong, who had joined the team from Switzerland, doubled DPR Korea’s advantage with a goal off a free kick in the 86th minute for the final score.

The win adds to DPR Korea’s 2-0 win over Chinese Taipei in the sides’ opening match of the tournament. Both DPR Korea and Hong Kong completed the first two match days with wins and will play Saturday evening for a coveted spot in the final round of the EAFF tournament.

“The Guam team – their defense was very good,” said Kim Jong Min, acting DPR Korea head coach, through a translator after the team’s match against Guam. “The team had to play very calmly and then they were able to play according to our original tactics and strategies against Guam.

“Our players are very good, in terms of physical strength and tactics and psychological preparation, so I’m confident that we can win this tournament and go to the final in Japan,” added Kim, who was filling in for DPR Korea head coach Jørn Andersen, who had been ejected from the team’s opening day match against Chinese Taipei and suspended for the match against Guam.

The Masakåda, Guam women’s national team, will look to bounce back from a Day 1 loss to Korea Republic. The team will play against Chinese Taipei Friday and Hong Kong on Monday. The full schedule of matches is online here. The women’s matches also will be live streamed on the EAFF Web site. 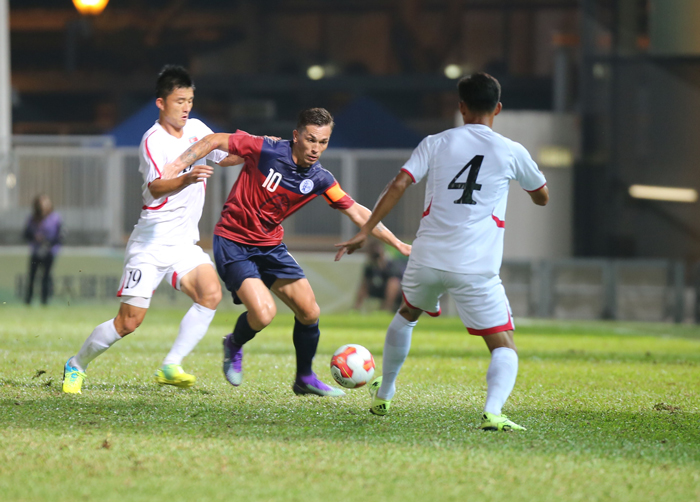 Jason Cunliffe, captain of the Guam Matao tries to get through the defense of DPR Korea’s So Hyon Uk (No. 19) and Pak Myong Song (No. 4) in a Match Day 2 fixture of the EAFF E-1 Football Championship Round 2 Hong Kong men’s competition Wednesday evening at Mong Kok Stadium. DPR Korea won 2-0. 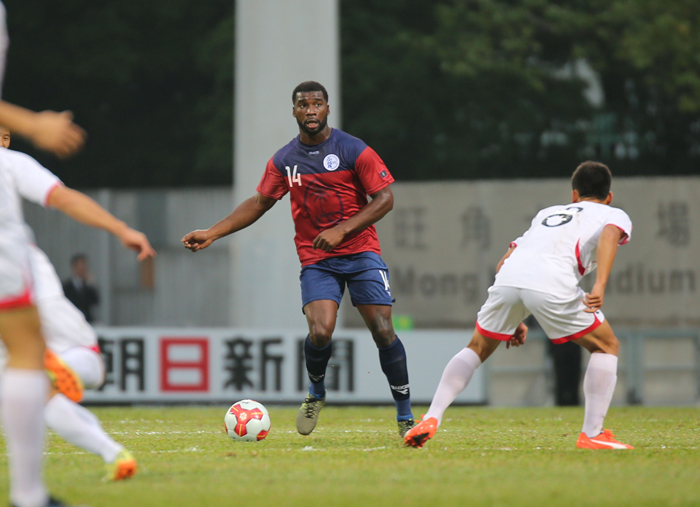 Brandon McDonald of the Guam Matao looks for a teammate to pass the ball in a match against DPR Korea on Match Day 2 of the EAFF E-1 Football Championship Round 2 Hong Kong men’s competition Wednesday evening at Mong Kok Stadium. DPR Korea won 2-0. 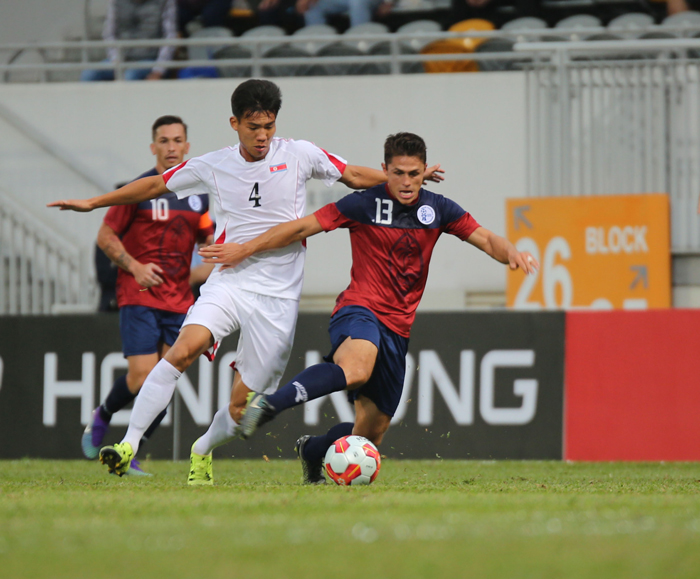 A.J. DeLaGarza of the Guam Matao runs the ball up the right side to the goal in a match against DPR Korea on Match Day 2 of the EAFF E-1 Football Championship Round 2 Hong Kong men’s competition Wednesday evening at Mong Kok Stadium. DPR Korea won 2-0. 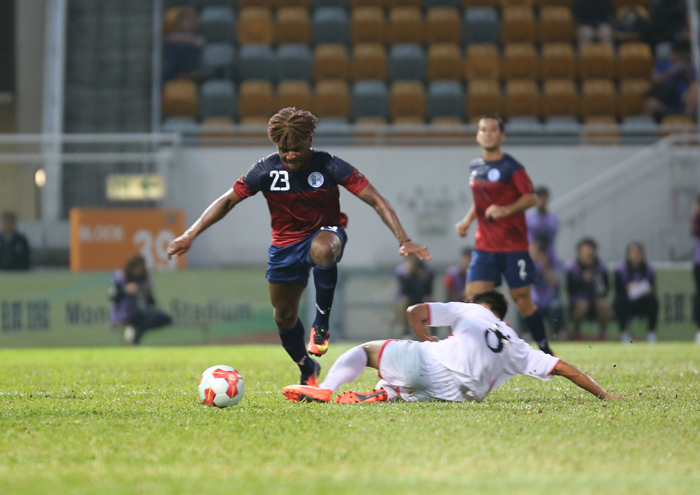 Shane Malcolm of the Guam Matao prepares to leap to avoid a slide tackle in a match against DPR Korea on Match Day 2 of the EAFF E-1 Football Championship Round 2 Hong Kong men’s competition Wednesday evening at Mong Kok Stadium. DPR Korea won 2-0. 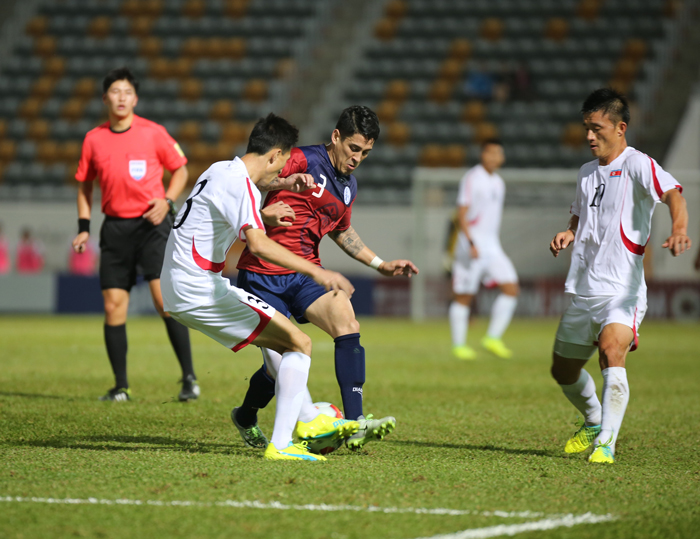 Jonahan Romero of the Guam Matao tries to get the ball past the defense of DPR Korea’s Jang Kuk Chol in a Match Day 2 fixture of the EAFF E-1 Football Championship Round 2 Hong Kong men’s competition Wednesday evening at Mong Kok Stadium. DPR Korea won 2-0.