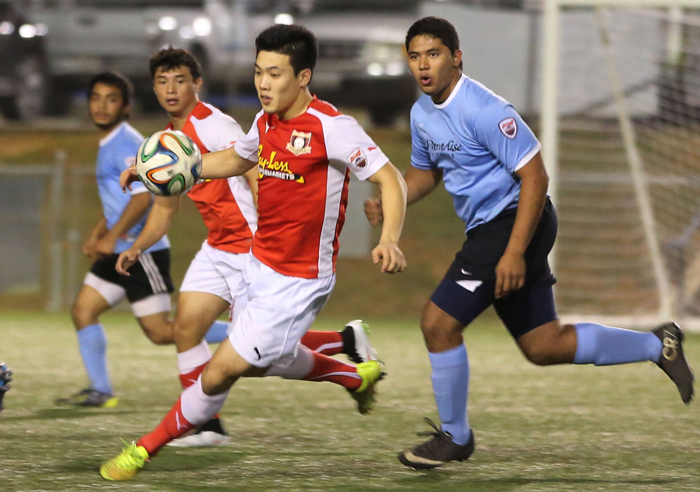 Posted at 03:24h in Matao Tournaments, Men's: Matao by admin

[March 24, 2015 – Harmon, Guam] Seven of the top players in Guam’s Budweiser Soccer League have officially been called up to the Matao, Guam men’s national team, to compete in two upcoming FIFA international friendly matches in Hong Kong and Singapore.

Of the seven, Min Sung Choi and Marlon Evans, both with the Payless Supermarkets Strykers FC, and Jan-Willem Staman, with Quality Distributors FC, received their first-ever call-up to represent Guam in international competition at the men’s senior level. Other BSL players on the 20-man traveling team roster are Matao captain Jason Cunliffe of the Rovers FC, Dylan Naputi of the Strykers FC, and Micah Paulino and Mark Chargualaf of Guam Shipyard.

“I definitely feel honored to have been selected as part of the Matao’s traveling team for the upcoming friendly matches,” Choi said. “I know so many players want to be on this team, so by being selected, it makes me want to work even harder to stay in.

“For me, it took a lot of sacrifice for sure – it’s hasn’t been a year since I moved back to Guam after living in Seattle for four years; but to play at this level, you have to be fully committed to put in the work. If you’re not doing the work, then someone else will and take your spot,” the 23-year-old Tamuning resident added.

Choi started playing soccer at the age of nine and eventually was selected to represent Guam at the U16 and U19 levels. He graduated from St. Paul Christian School and then moved to Seattle, Wash. to complete his undergraduate studies. Choi currently is the leading scorer for his team in the premier division of the BSL and plays alongside Evans, who recently accepted a full soccer scholarship from North Greenville University in South Carolina, and Matao veteran Naputi.

The selected players from the BSL were chosen for an opportunity to play at the international level based on their current performance in league matches and during Matao squad training sessions. As with the majority of countries around the world, the composition of senior-level national teams include players from the local clubs, as well as clubs in professional leagues abroad.

The team will first play Hong Kong in Hong Kong Mar. 28. The team will then travel to Singapore to play Singapore’s national team Mar. 31. The Mar. 31 fixture between Guam and Singapore will be the first time the two nations will face off in a men’s “A” match.

“By no means is this team the final group of players who will represent Guam at the upcoming 2018 FIFA World Cup qualifiers in June,” said Gary White, head coach of the Guam men’s national team. “Particularly for the new players called up to the team this month, this series of friendly matches will give them the opportunity to impress me and the coaching staff before the final selection for the World Cup qualifier squad is made.

“Not only will there be pressure on the team to win for Guam, but there will be pressure on each individual player to exceed expectations in order to receive a rare call up to Guam’s World Cup qualifier squad. To play at the highest level, we must select only the best players eligible to play for Guam,” White added.

The 2018 FIFA World Cup qualifiers will begin in June. Guam automatically passed the pre-qualification stage as one of Asia’s top 34 countries based on January’s FIFA/Coca-Cola World Ranking table. The official draw for the qualifiers will take place in April, where Guam will learn of its group-stage opponents, which could range from East Asia powerhouse Japan to countries as far as Qatar in West Asia.