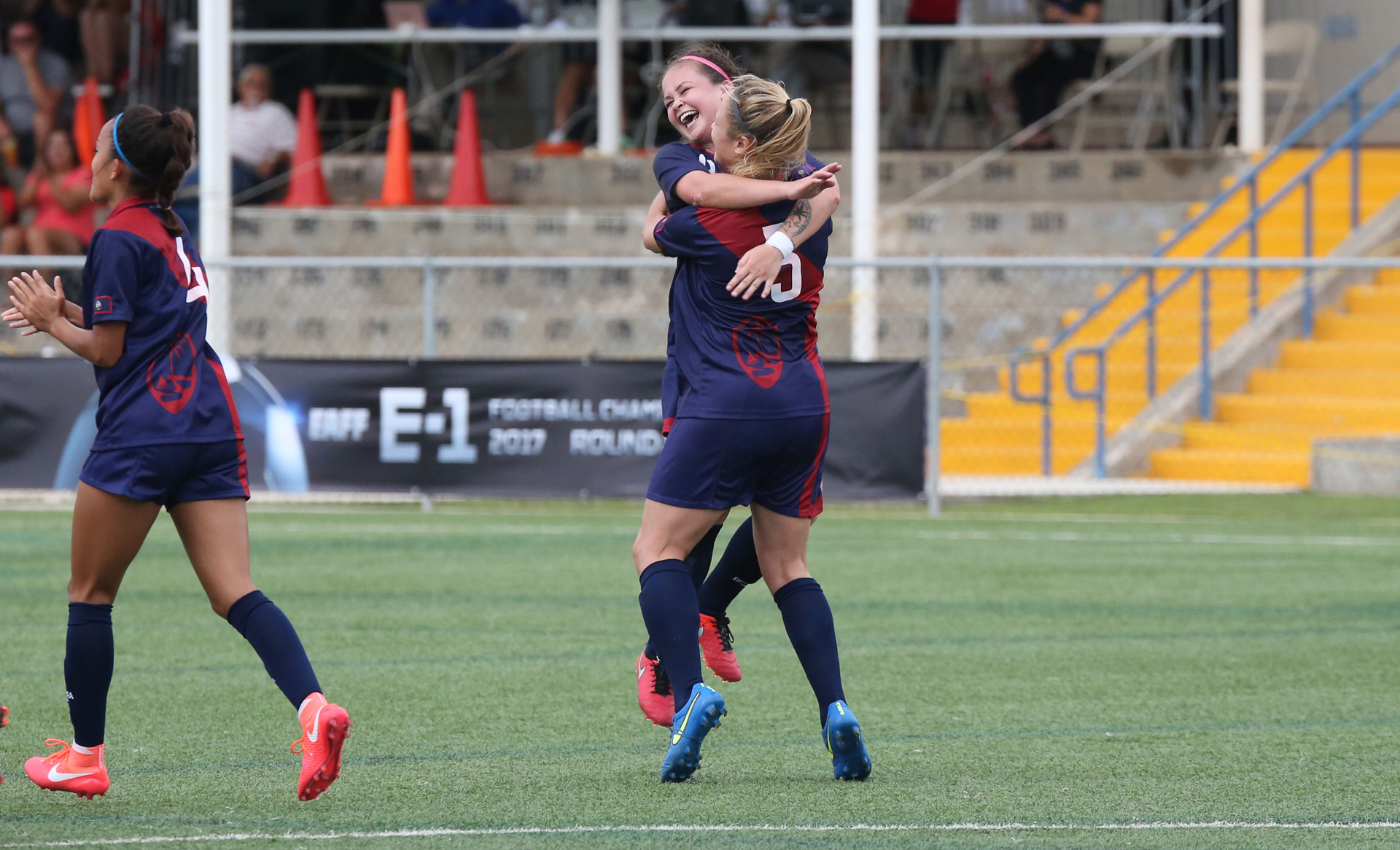 [July 4, 2016 – Harmon, Guam] – The Masakåda, Guam women’s national team, qualified for the semifinal round of the EAFF E-1 Football Championship following second win of the Round 1 tournament, a 5-0 contest against the Northern Mariana Islands at the Guam Football Association National Training Center.

Guam’s Paige Surber finished the match with two goals – one goal in each half – to lead the Masakåda. Simie Willter, Samantha Kaufman and Anjelica Perez also scored in the contest.

With the win, Guam moves on to Chinese Taipei in November, to play in the tournament’s semifinal round against Korea Republic, Chinese Taipei, and Hong Kong. Guam is no stranger to the next round of play, also advancing in 2014.

Guam and Northern Mariana Islands women’s national teams met in the third and final match of the EAFF E-1 Football Championship Round 1 Guam at the GFA National Training centre in Guam.

A tie would have been enough for the local team to qualify for the next round; however, the Masakada, who were cheered by a few hundred supporters, confirmed their superiority in the region by winning this match as well with a 5-0 result.

The Northern Mariana Islands team looked as a much better team defensively compared to the one seen in the previous edition of this tournament, and held the home side at bay in the first half-hour.

The game changed as the clock stroke the 30th minute and Paige Surber gave Guam the lead with an unstoppable shot from outside the box.

In the 43th minute, Chevy Alipio provided a great save on a volley from Surber, but on the rebound Samantha Kaufman netted Guam’s second with a violent shot into the roof of the net. The Masakada were on a roll and added a third before the end of the half through a curved drive by Simone Willter.

The Masakada controlled the game throughout the second half as well, but good defending and a few more nice saves by Alipio kept the score on the 3-0 result, until Surber clinched her second of the day. It was a pure striker’s goal with a sharp run into the penalty area to meet and deflect a perfect cross coming from captain Anjelica Perez.

And as the sunset fell on the GFA National Training, Perez scored the fifth goal that confirmed Guam as the winners of Round 1. The victory also means that the Masakada will travel to Chinese Taipei in November for the next round of the tournament.

“It was hard for us to get into a rhythm, because it has just rained out and the turf was wet, so the ball was very fast and it took a bit to adjust to that. We then started to connect well, and my first goal was a result of that improved team-work.

“We struggled with finish in the previous game versus Macau, but we did much better today.

“As we move on to Round 2 I expect the competition to be much higher, but we will work hard to improve and get to that level, as a team. I am so happy that I am going to see my national team again friends in November!”

“In the first half, in the beginning we were struggling to create chances, but our first goal took a lot of pressure offer shoulders, and we got things going. I am happy with the result and the way the girls played.

“I have some high-quality players here, my job is just to explain to them how we should play as a team.

“It is not easy to get the players together with several girls living off-island, others in college or working, but we have more candidates and we will put together a competitive squad for Round 2”.

“I believe we played very well in the first game versus Macau, and we could have got a win there. But Guam is a great team, surely better than us for now.

“I am a new player, but I know the team did better than two years ago, today we were very composed – at least in the first half.

“I really hope one day we will be able to beat Guam, we are getting better, and once we improve our attacking, we will be an ever better team”.

“We gave away some very soft goals, but I believe that overall we did well. Our team is very young. We don’t have the experience that Guam have.

“We improved a lot from two years ago, and even though we have lost 5-0 today, the football that we played was much better.

“In particular, we definitely need to improve our attacking plays. I hope we will get the chance to play more international matches to get experience. But overall I am happy. We did improve”.