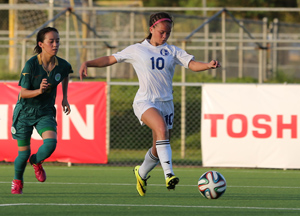 Posted at 06:19h in Masakada Tournaments, Women's: Masakada by admin

The Masakada, Guam women’s national football team, capped its superior performance in the EAFF Women’s East Asian Cup Round 1 tournament with an 11-0 demolition of Macau, witnessed by a full house of supporters at the Guam Football Association National Training Center.

“This round was a good experience for us – helping us build team chemistry and get everyone on the same page in a real international tournament setting,” said Masakada captain Simie Willter after the match. “Coach (Sang Hoon) Kim really emphasized that this round is more preparatory and that the next round – the semifinal round in Chinese Taipei – is where we really need to shine. We need to get Hong Kong back and perform at our best against Chinese Taipei and China – that is the round of matches we’re all focused on now.

“With regard to many of the new players who’ve just been called up to the team, I’m really glad we’ve been able to mesh well. I’m looking forward to seeing everyone again in November,” Willter added.

Macau’s woes began early when disorganization in the country’s defense on a free kick by Guam’s Paige Surber resulted in an own goal and put the Masakada up 1-0. Minutes later, Cici Kobinski found a pathway to the goal amid a highly congested box filled with about half of the opposing team’s players.

Macau’s defensive army continued to crowd Guam’s attacking half, but the Masakada was able to net three more goals before the halftime whistle from Surber, Samantha Kaufman, and Inyssa Perez.

The second half was a similar scenario with the Masakada utilizing various combination plays to get shots around the Macau defense. Before the final whistle, Surber finished three plays and Kaufman netted two more goals. Willter scored Guam’s other goal in half for the 11-0 shutout.

“Like Coach Kim had told us, the challenge in this match was to keep mentally focused,” Surber said following the win. “Even with a team like Macau relying mostly on defense, once we pass, move together, and set beautiful plays, we’re going to get a goal in. We needed to have this mentality for the entire match to continue to stay ahead.”

Immediately following the victory, the Masakada was recognized with a legislative resolution and Sen. Aline Yamashita presented each team member and staff with certificates to commend their efforts in developing the local community of families through the sport of football.

In just two matches, the Masakada have racked up 18 goals, with tournament goal-scoring leader Surber netting six. Kaufman, who also plays for Beach Futbol Club in the United States’ Women’s Premier Soccer League, scored four for Guam, including a hat trick against Macau. Kobinski is the only other player from Guam to score in both matches.

The tournament continues with the men’s sides Wednesday beginning at 3 p.m. with Macau taking on the Northern Mariana Islands. The Matao, Guam men’s national team, will play Mongolia at 5:30 p.m.

There is no admission fee to watch the matches. As an added incentive for spectators, GFA will be raffling off autographed jerseys during each tournament day. 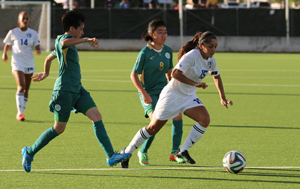 Guam’s Cici Kobinski gets through a pair of Macau defenders en route to the goal during a Day 2 match of the EAFF Women’s East Asian Cup Round 1 tournament Tuesday at the Guam Football Association National Training Center. The Masakada, Guam women’s national football team, blanked Macau 11-0. 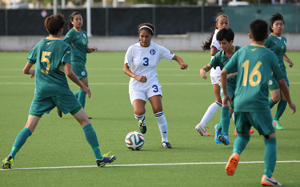 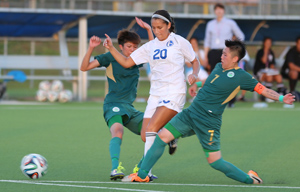 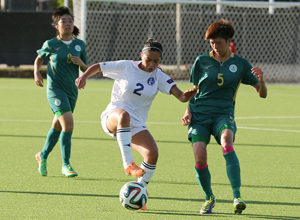 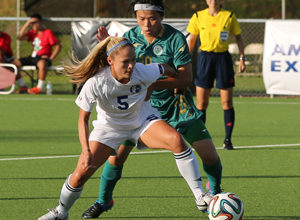 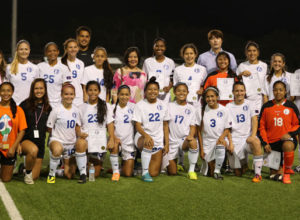 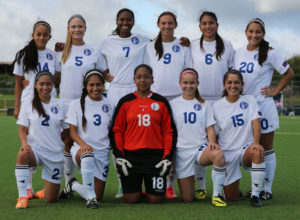 The starting eleven players from Guam pose for a group photo before the team’s match against Macau on Day 2 of the EAFF Women’s East Asian Cup Round 1 tournament at the Guam Football Association National Training Center. 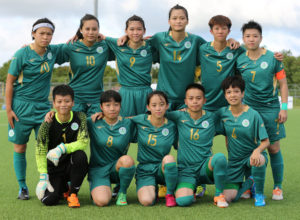 The starting eleven players from Macau pose for a group photo before the team’s match against Guam on Day 2 of the EAFF Women’s East Asian Cup Round 1 tournament at the Guam Football Association National Training Center.