Posted at 05:33h in Masakada Tournaments, Women's: Masakada by admin

[July 22, 2012 – Yona, Guam] True to the team’s nickname, the Masakada, Guam women’s national football team, staged a valiant comeback from a three-goal deficit, but ran out of time in the end as the team conceded a 4-3 Hong Kong victory in the final match of the Women’s East Asian Cup preliminary competition at Leo Palace Resort Guam.

“In the first half, we were still a little jittery,” said Masakada co-captain Anjelica Perez after the game. “We just weren’t playing our game in that half – we seemed to be playing more of their game. We settled down, regrouped in the second half and played passionately knowing that we had to play with heart if we wanted to win.

“It was a good feeling when we came back to tie the score in the second half – we had the game back. Later, though, when Hong Kong’s last goal just rolled past the goal line, you could see the team’s hearts just sank.”

Hong Kong gained the early advantage with a goal from Cheung Wai Ki in the sixth minute. The Masakada reacted by upping its defensive effort for the next 20 minutes, but a foul called on Guam while attempting to stop a Hong Kong run toward the goal set up a penalty kick opportunity for its opponent. Chan Wing Sze sent her shot to the left post for the score, and six minutes later, Lau Mung King tacked on another goal to Hong Kong’s first-half tally.

The Masakada’s Paige Surber put Guam on the scoreboard for the first time in the 48th minute after she took a pass from the left wing and passed Hong Kong’s goalkeeper who was on the ground trying to stop the ball. Guam later continued to set up shot opportunities, keeping a fatigued Hong Kong team on its back foot for most of the half.

Guam struck again in the 70th minute when Perez finished a pass from Tanya Blas-Cruz near the right post. Perez scored the equalizer two minutes later near the left post this time, connecting on a pass in the penalty box from Simie Willter.

Hong Kong would later break the tie four minutes later when Wong Ka Man’s run with the ball was challenged by Guam goalkeeper Jena Cruz. Wong was able to regain possession of the ball and kicked it toward the goal. With Cruz on the ground from the play, Guam’s other defenders sprinted to guard the goal, but the ball had already crossed the goal line for the final score.

“When Guam tied the score in the second half, I told my team to calm down,” said Hong Kong head coach Chan Shuk Chi after the game. “The day before, we played in heavy rain against (the Northern Mariana Islands) and exerted a lot of energy because of the weather and field conditions. Our fitness level went down in the second half (against Guam), which probably contributed to some poor decision-making.

“We were playing against a very hardworking team though – Guam really improved a lot. Next year, if we play again, I already know it won’t be easy for Hong Kong,” Chan added.

After the match, a short awards ceremony was held to present the Hong Kong team with the preliminary competition championship trophy. Hong Kong moves on to the second round of the Women’s East Asian Cup tournament in China in October.

Cheung was named tournament MVP and teammate Ng Wing Kum was awarded the golden boot award. Although both Surber and Ng scored four goals in two games, it was determined that Ng scored her goals in less minutes played than Surber.

The Matao, Guam men’s national football team, take center stage Sunday at 4 p.m. against Macau. The winner of the Guam-Macau contest will move on to the second round of the East Asian Cup to be played in Hong Kong in December. The community is invited to watch the game at Leo Palace and admission is free.

The Masakada’s Paige Surber tries to break through the defense of Hong Kong’s Po Ching Ying (14) and Wong Shuk Fan (12) to get to the ball in the final match of the Women’s East Asian Cup preliminary competition at Leo Palace Resort Guam. Hong Kong defeated Guam 4-3. 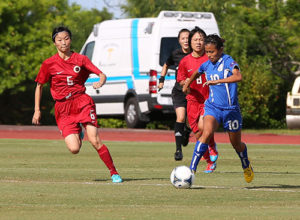 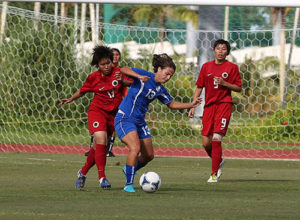 The Hong Kong team poses with its championship trophy after defeating Guam 4-3 in the final match of the Women’s East Asian Cup preliminary competition at Leo Palace Resort Guam.