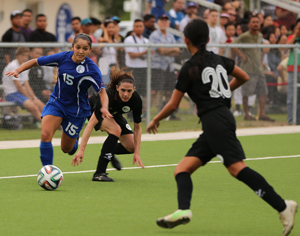 Posted at 06:05h in Masakada Tournaments, Women's: Masakada by admin

The Masakada, Guam women’s national football team, opened the EAFF Women’s East Asian Cup Round 1 tournament with a dominating 7-0 performance over the Northern Mariana Islands in front of close to 1,000 spectators at the Guam Football Association National Training Center Sunday.

“It’s never easy to score goals, but we did the job,” said Sang Hoon Kim, head coach of the Masakada, after the match. “The team from NMI seemed to play more defensively from the beginning and looked mostly for counterattack opportunities. With our opponents playing more of a defensive game, it was hard to get passes around their back line. We needed to try different combination plays and some worked.

“From early practice sessions, I’ve always stressed to the players that what I need from them is to play as a team and they did that in this match. It was a good result,” added Kim.

Guam’s Paige Surber opened scoring in the seventh minute, heading in a cross from captain Simie Willter and just a few minutes later, Lauren Valla connected on a Cici Kobinski cross to double the Masakada’s lead.

Later, NMI managed to break up a corner kick play, but sent a loose ball to Kobinski. Guam’s right winger sent the ball back in the box and found Dani Zavala’s head for the 3-0 advantage less than 20 minutes into the match.

Halftime substitute Maria Amezola quickly made her presence known in the second half, finishing a back pass from Willter for the 4-0 lead. Later, Gabby Evaristo launched a long pass over a few NMI defenders that landed in front of Kobinski. Kobinski skillfully dribbled through NMI’s last line of defense and finished the play to tack on Guam’s fifth goal.

Defender Samantha Kaufman made it a 6-0 match after she managed to flick a Haley Flores pass over NMI keeper Jhaneeka Atalig and ran the ball in for the finish. Surber later capped the 7-0 win with a run through the center from an Inyssa Perez assist.

Valla, Zavala, Amezola, Kobinski, and Kaufman all scored their first international goals for Guam in the tournament opener.

The Masakada next play Tuesday at 5:30 p.m. against Macau.

The EAFF East Asian Cup Round 1 tournament opens Monday at 3 p.m. with the Blue Ayuyu, NMI men’s team, facing Mongolia. The Guam Matao play the late match at 5:30 p.m. against Macau. There is no admission fee to watch the matches.

As an added incentive for spectators, GFA will be raffling off autographed Guam national team replica jerseys each day of the tournament. The first winner was Shaun-Paul Martinez, who won a jersey autographed by the members of the 2014 Masakada. 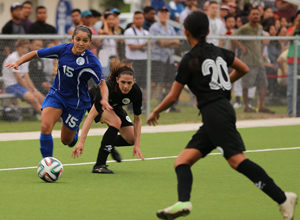 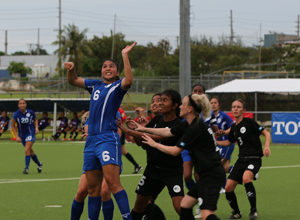 Guam’s Dani Zavala leaps ahead of the Northern Mariana Islands’ defenders for a header in the opening match of the EAFF Women’s East Asian Cup Round 1 tournament at the Guam Football Association National Training Center. Zavala scored her first international goal for Guam in the team’s 7-0 victory. 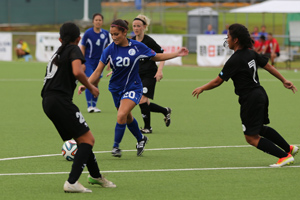 Guam’s Inyssa Flores dribbles the ball across the goal to find space for a shot against the Northern Mariana Islands in the opening match of the EAFF Women’s East Asian Cup Round 1 tournament at the Guam Football Association National Training Center. Guam defeated NMI 7-0. 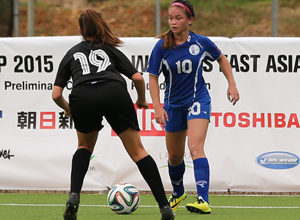 Guam’s Paige Surber looks to get around the defense of the Northern Mariana Islands’ Gabrielle Race in the opening match of the EAFF Women’s East Asian Cup Round 1 tournament at the Guam Football Association National Training Center. Surber scored twice for Guam in the team’s 7-0 victory. 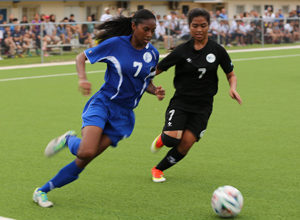 Guam’s Simie Willter sprints with the ball along the goal line past the Northern Mariana Islands’ Mikky Vargas in the opening match of the EAFF Women’s East Asian Cup Round 1 tournament at the Guam Football Association National Training Center. Guam defeated NMI 7-0. 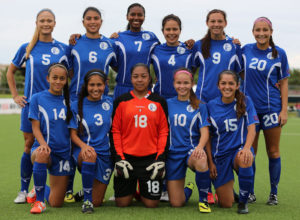 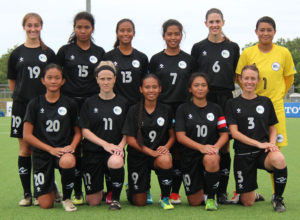