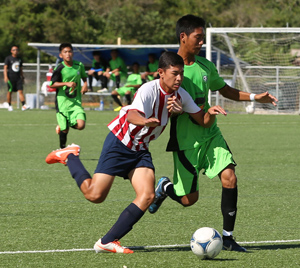 Posted at 03:25h in Friendlies, News by GFA GW Admin

Goalkeeper Joshua Galarion made the difference for the Tan Holdings FC U18 team, saving two penalty kicks to help the visiting team from the Northern Mariana Islands salvage a 2-2 draw with the Strykers in Day 1 action of the Marianas Invitational Tournament at the Guam Football Association National Training Center.

Already leading 2-1 by the 30th minute, the Strykers had a chance to take a two-goal advantage after referee Kyle Legozzie awarded the team a penalty kick following a heavy slide tackle by Tan Holdings’ Kautong Kiyofumi Omengkar that toppled Xavier Naputi as he raced to the goal. Instead, Galarion stopped Naputi’s ensuing shot and almost immediately on the next play, Tan Holdings equalized with a goal from Sean Perez.

The Strykers had another penalty kick opportunity about 25 minutes into the second half. After managing to wrest the ball from Galarion, the Strykers’ Ray Macias was taken down by the Tan Holdings goalkeeper in the box. Galarion read Macias’ kick from the spot, diving to his right and preventing what could have been the game winner.

“The main objective for the team from this tournament is to gain experience,” said Tan Holdings FC coach Jershwin Angeles. “For some of the players moving on to college, and also the younger players who are playing up for this tournament, I want them to experience a higher level of football outside of NMI.

“The team did well for its first match in this tournament, although they struggled at times with fatigue due to the heat. They’re not used to playing on this field, and I warned them that the artificial turf would make it doubly hot; however, for the most part, the energy and the will were there, and they didn’t give up. If they give 100 percent, that’s what matters the most to me,” added Angeles, who earned his AFC “C” Coaching License in 2012 during an AFC Coaching Course held in Guam.

In the day’s other match, the Wings FC defeated the ASC Trust Islanders 2-0 with goals from Ricky Katsumata and Isiah Lagutang.

The tournament continues Saturday morning at 9 a.m. with Tan Holdings FC taking on the Islanders on the upper turf pitch and the Strykers playing against the Wings on the lower turf pitch.

There is no admission fee to watch the matches. A full schedule is available online at http://www.guamfa.com/others-friendlies-schedule-results