Kenney to Play for Gordon College in Massachusetts 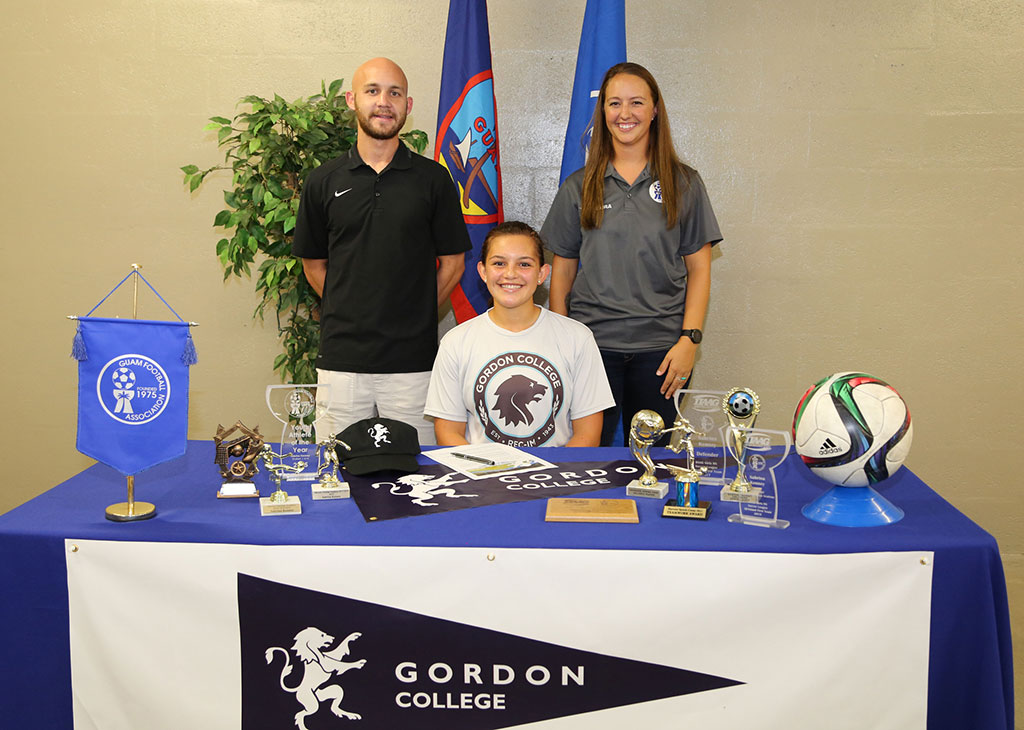 27 Jun Kenney to Play for Gordon College in Massachusetts

Posted at 15:50h in Masakada Tournaments, Women's: Masakada by admin

The Fighting Scots compete in the Commonwealth Coast Conference, affiliated with NCAA Div. III, and made it to the conference semifinals last year, according to the Gordon Athletics Web site.

“I’m really, really looking forward to developing my game a lot more out there with new experiences,” Kenney said. “With everyone who I’ve spoken about intercollegiate soccer in the States, they say that soccer there is faster and more physical, so those are the areas of my game that I’m looking forward to grow into and improve the most.”

Kenney was first introduced to the college by her grandparents who live 45 minutes away from the college campus in Wenham, Massachusetts. During summer break before her junior year, Kenney visited the campus with her grandparents and within the last year, met Gordon College’s women’s soccer coach, Charles “Chuck” Breton.

“First, I am beyond proud of Sabbie for pursuing collegiate soccer,” said Maggie Phillips, Head Coach of the Guam U19 Women’s National Team. “I have been working personally with her and her family for the past couple of years helping where I could to make this happen. She put all the hard work in and earned every bit. I have no doubt that Sabbie will be successful in any path she chooses. She will be a great addition to Gordon College’s team and the school itself. Sabbie is self-motivated and eager to learn. If there was ever a moment she struggled with a concept on the field, she did not hesitate to ask. She also has the grit and determination to push through the tough moments, especially when she knows her team needs her. Being coachable and mentally tough are top attributes any coach looks for in a player. These will ensure Sabbie’s success and make her a vital member of the team.

“I believe it is important that young people not only pursue a higher education, but also work to play their sport of choice at the highest level possible. Players who choose to leave island and play collegiate soccer will not only develop their own personal playing styles, but they will be playing at an extremely high level for, hopefully, all four years. The hope is that during that time and after, they will also continue to answer the call to play for Guam. This combination will only strengthen our program. I encourage all our players to pursue this route as it not only helps them develop as an independent adult, but also helps them become the best player they can be,” Phillips added.

Last season, the Fighting Scots finished with an 11-7-1 overall record for the season and 5-3-1 in conference games.

“In my conversations with the coach, he has really done well with the program there and the team is very competitive,” Kenney said. “Also, a lot of the team tactics we spoke about were similar to what we’ve done here with our national program, so it made me believe I could make the transition. I was thinking to myself, yes, I can do this.

“Playing at the intercollegiate level would really help me improve and stay in the game at a high level. Eventually, I would really love to continue playing for Guam internationally,” Kenney added.

Kenney made her debut for Guam at the senior national level on Dec. 9, 2017, starting for the Masakåda in a friendly match against Singapore in Singapore. She currently plays for the Bank of Guam Lady Strykers after a few seasons with the Lady Crushers. At the youth level, she started with the Orange Crushers up until the U14 level and moved to the Strykers.

“I’m sad she is leaving, but I know I’ll have her on the field again soon,” Phillips said. “She is a light on the team and I know her beliefs will guide her through the next phase in her life. It has been a joy being her coach the last couple of years, as well as her teammate with the Lady Strykers in the last two seasons. I look forward to hearing about the incredible things that she accomplishes.”

Kenney, a 2019 graduate of Harvest Christian Academy, plans to major in Kinesiology at Gordon College. She signed an NCAA Division III Student-Athlete form with her intention to play soccer for the Fighting Scots starting with the 2019-2020 academic year.

“I would like to thank my grandparents for pointing out the college to me first, but my dad especially because he was the one who really pushed me into soccer,” Kenney said. “I seriously would not have been in this sport if he hadn’t pushed me to do it, as well as with the love and support from the rest of my family and the local soccer community.

“Also, Coach Sam San Gil was a huge mentor to me when I first started with the (United Airlines GFA) National Academy at GFA, and also the national coaches I’ve trained and played under – Coach Belinda (Wilson), Coach Maggie (Phillips), and Coach Kim (Sang Hoon). I’d also like to thank GFA Executives and all others at GFA for providing opportunities for me to play,” Kenney added.

Kenney is the daughter of Frank and Josephine Kenney and has one younger sister, Samantha, who also is part of Guam’s national program. 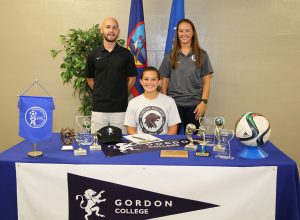 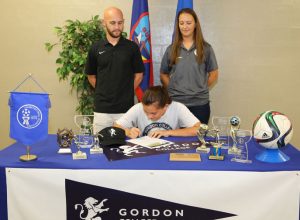 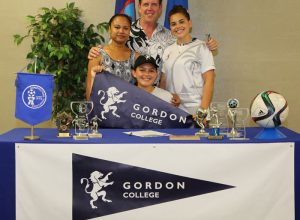 Sabrina Kenney, seated, poses for a photo with her family after officially signing to play women’s soccer for Gordon College in Massachusetts during a signing ceremony at the Guam Football Association National Training Center. Gordon College plays int eh Commonwealth Coast Conference, affiliated with NCAA Division III. In the photo behind Kenney, are from left to right, her mother Josephine, her father Frank, and her sister Samantha.