Kenney sisterly bond tough to break on and off pitch 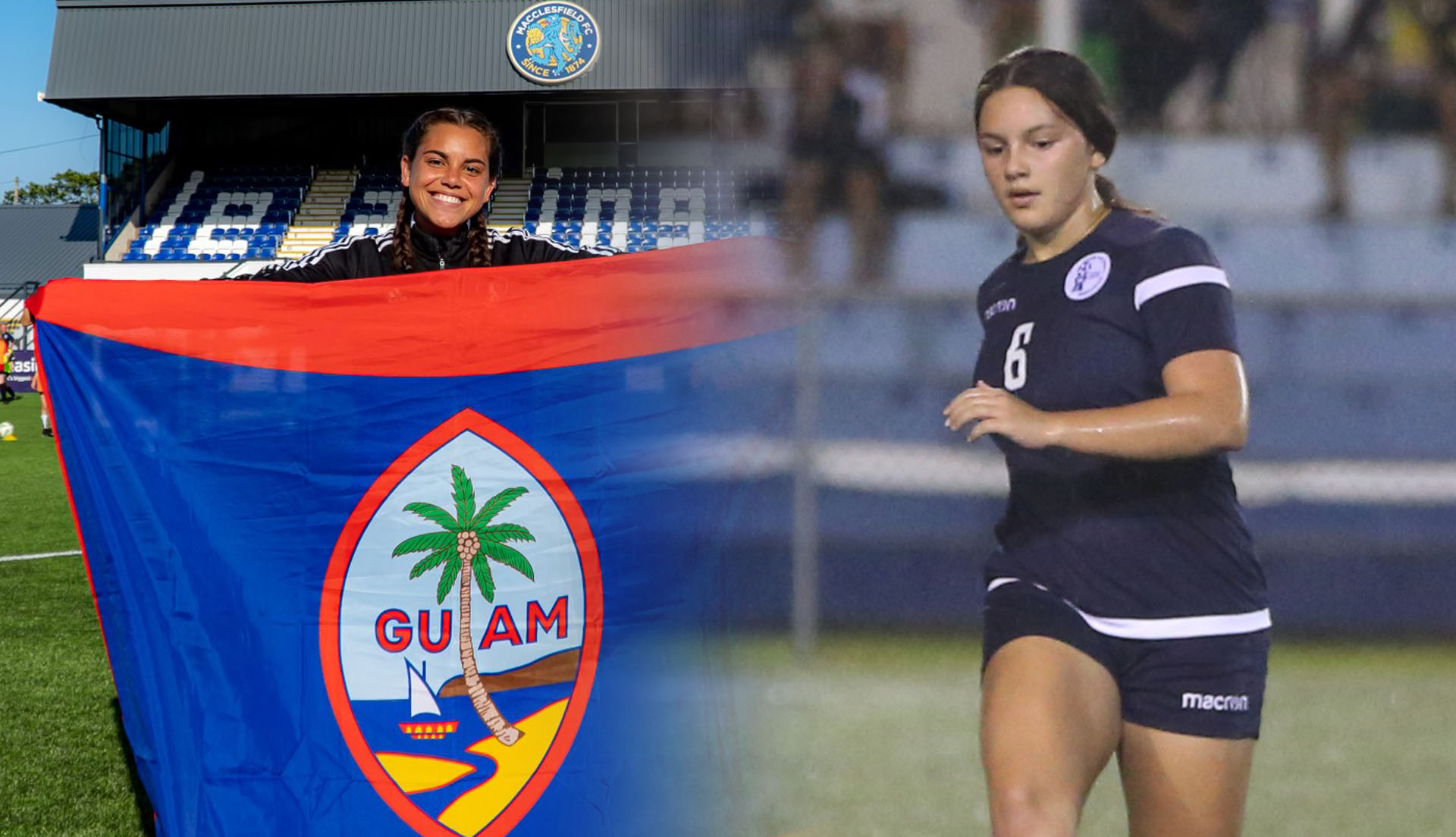 Excited doesn’t begin to describe how the Kenney sisters felt when they received news that both of them made the final roster for Guam’s team in the AFC Women’s Asian Cup India 2022™ Qualifiers. 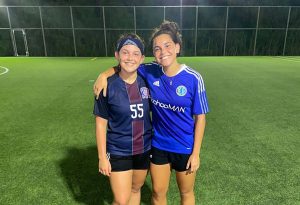 Sabrina Kenney (left) and Samantha Kenney, right, pose for a recent photo together earlier this year when older sister Sabrina visited Guam for summer break. Both Kenney sisters have been called up to the Masakåda, Guam Women’s National Team for the AFC Women’s Asian Cup India 2022™ Qualifiers Group D in Bishkek, Kyrgyz Republic.

“I am unbelievably ecstatic to be playing on the same National Team as Sam; it’s a rare occasion to have sisters play on a national team together, so for Sam and I to be doing as such is extraordinary,” said Sabrina Kenney, via WhatsApp from Massachusetts. “Looking back, once I was told by Coach Ross (Awa) that I had made the roster, I remember going to Sam, standing right in front of her, grabbing her shoulders, and just jumping and screaming with excitement. No words were spoken before her eyes lit up knowing what this meant to where she then joined me in the celebration. We just bounced in circles and hugged for a solid minute before relaying the news to our family.

“I’d say this was a blessing in disguise as well because as some may know, Sam was able to play in England this past summer. And while I was so happy for her, I also missed spending time with my little sis when I went back (to Guam) for the break. So, post receiving the great news ‘til this day, we say to each other, ‘it’s alright! We’ll see each other again soon,” added Sabrina Kenney, 20, currently a junior at Gordon College in Massachusetts.

Samantha Kenney, 17, enjoyed a summer of high-level football – first with Macclesfield FC’s residency program in England and after, a Guam U20 Women’s National Team training camp in San Diego, before returning to Guam ahead of her senior year at Harvest Christian Academy. This will be the younger Kenney’s first call-up to the Masakåda.

“When I knew I was added to the initial selection pool, I made up my mind to do everything I could to make it to the final squad,” said Samantha Kenney, also captain of the Guam U20 Women’s National Team. “When Coach Ross (Awa) gave me the call that I made it, I was extremely happy and honored knowing this would be an amazing opportunity for me as an athlete. When Coach Ross told me that my sister also made the squad, it only made me more eager for the opportunity knowing my sister would be by my side for my first call-up to the Masakåda.

“I looked up to Sabbie growing up. Sabbie always had leadership roles on her various Youth National Teams and is an amazing defensive player. I think watching her defensive skillset triggered my defensive mindset in the sport as well: I’ve always either played in the defensive line or as a defensive mid,” Samantha Kenney added.

Guam was drawn into Group D of the AFC Women’s Asian Cup India 2022™ Qualifiers and will kick off its campaign on Oct. 18 against United Arab Emirates. The team next plays against Myanmar on Oct. 21, before finishing out the qualification round against Lebanon on Oct. 24. All of Guam’s matches will kick off at 5 p.m. on their respective dates at the Dolon Omurzakov Stadium in Bishkek, Kyrgyz Republic. Opposing teams may have difficulty if encountering both Kenney sisters on the pitch, not only having to break lines, but also a strong sisterly bond in the defensive third.

“A strength I believe we both have is reading the field and anticipating passes, so with the Kenney sisters on the pitch together, I’m confident in seeing a number of interceptions and ball winning,” said Sabrina Kenney.

For Samantha Kenney, she said she and her sister hold each other to high standards on the pitch and are not afraid to express disappointment or give praise, but also take comfort in knowing they unconditionally support each other on and off the pitch.

“We’re able to keep it real with each other when it comes to critiquing each other’s play,” Samantha Kenney said. “It’s also nice to have that extra deep family support system when traveling internationally, especially when we’re together 24/7 (on those trips).”

The Kenney sisters have traveled together previously for a handful of Youth National Team competitions, including the AFC U19 Women’s Championship Qualifier in 2018 and also the Marianas Cup the same year for the tournament’s U19 Women’s Competition. The pair were selected as starters together for the first time in the AFC tournament in Guam’s 12-0 victory over the Maldives. While they both hope to earn starting positions together in the upcoming matches in Kyrgyz Republic, they also relish the opportunity to be part of history when Guam returns to the AFC Women’s Asian Cup after an 18 year absence. Sabrina Kenney was only two years old when Guam last played in 2003, and Samantha Kenney was not yet born.

“It is astounding to realize that this fall, the Masakåda will be returning to the AFC Women’s Asian Cup after 18 years,” Sabrina Kenney said. “Sam and I are both humbled and proud to be given the opportunity to represent Guam at such a time, to be given a chance to improve our team rank and to press on towards the next stage.”

Six of the eight qualification groups have already concluded, with Vietnam, Indonesia, Korea Republic, IR Iran, Philippines, and Thailand all advancing to the AFC Women’s Asian Cup India 2022™ Final Round in January 2022 as their respective group winners. The lone groups left in qualification are Group D featuring Guam and its opponents, and Group A, which features Chinese Taipei, Bahrain, and Laos. Group A will begin competition on Oct. 19 in Bahrain.

Only the winners from the remaining group will move on to the Final. Teams automatically qualifying for the Final are 2018 winner Japan, 2018 runner-up Australia, 2018 third-place team China PR, and tournament host India. 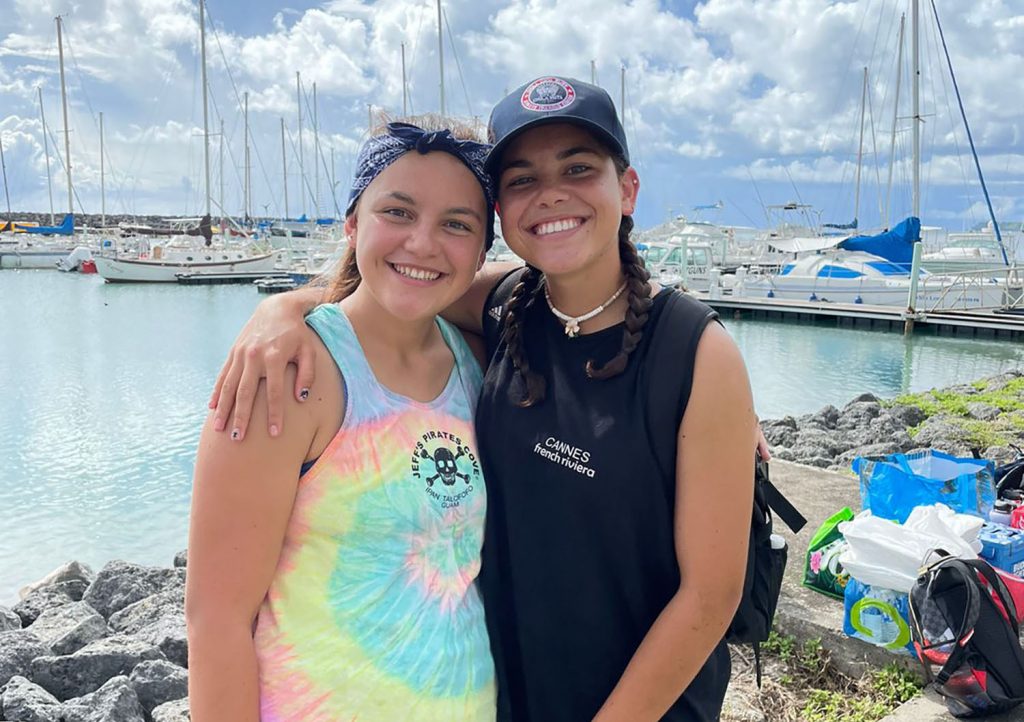 Sabrina Kenney (left) and Samantha Kenney, right, pose for a recent photo together earlier this year when older sister Sabrina visited Guam for summer break. Both Kenney sisters have been called up to the Masakåda, Guam Women’s National Team for the AFC Women’s Asian Cup India 2022™ Qualifiers Group D in Bishkek, Kyrgyz Republic.