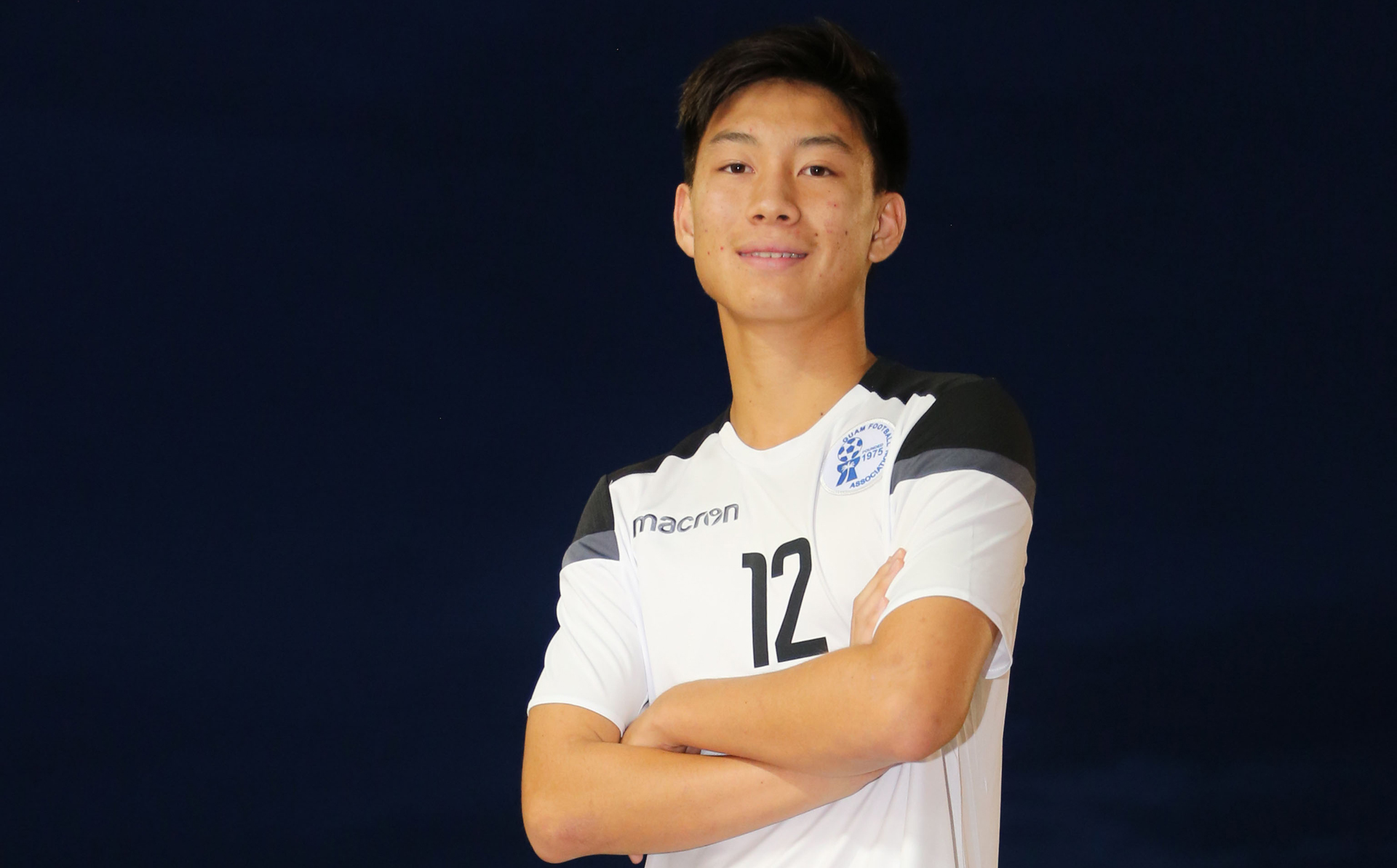 [May 14, 2019 – Harmon, Guam] Taking on new challenges and overcoming them keeps 16-year-old Kyle Halehale motivated to achieve his dream: to play football at the highest level both internationally and professionally.

“I love challenges,” Halehale said. “In football, I love them because they help me develop as a player both on and off the field.”

In 2015, during Guam’s first-ever FIFA World Cup qualifier home matches, Halehale marched onto the competition pitch at the Guam Football Association National Training Center as a flag bearer and ball boy. Experiencing the magnitude of the matches from pitch level in his role then as a ball boy inspired him to push forward with his aspiration to someday earn a spot on the Guam men’s national team roster.

The challenge he set for himself – to earn inclusion into the Matao set up – started with an E-mail he sent to Guam National Head Coach Karl Dodd when the Australian professional coach and former professional player arrived in Guam last year.

“I brought him into the office and went through his match footage and explained what is required from his position and what he needs to work on to be included in the Matao program,” Dodd said. “I was impressed at how quickly he made the changes and how much extra work he would put in training on his own. I could see he was a very motivated and driven individual. I was impressed with his skill set but could see he just needed to learn how to use it properly.

“Since his inclusion in the Matao program, he has been holding his own on a consistent basis and this is due to his attitude and willingness to work harder than his opponent,” Dodd added.

Halehale developed his passion for the sport at an early age, playing for the Wings FC in the Robbie Webber Youth Soccer League – now presented by Triple J Auto Group – and the Aloha Maid Minetgot Cup Elite Youth League. He also played for various teams in Japan during summers visiting his uncle, Daisuke Tsujimoto. Currently, he is playing for the Bank of Guam Strykers in the Bank of Guam 12th Annual GFA Cup. The Strykers are defending champions of Guam’s annual premier men’s soccer tournament.

“When I was younger, I didn’t really get a lot of electronics like some kids – I didn’t own an Xbox or anything like that, so at home, I practiced constantly with a soccer ball, dreaming of becoming a professional player,” Halehale said. “In fact, whenever someone would ask me what I wanted to be when I grew up, I’ve always said I wanted to become a professional football player. It’s still my goal – hopefully I can achieve it, not only for myself, but to also show the kind of potential players from Guam have, to open doors for others who have the same dream.”

Starting in 2016, Halehale started receiving invitations to youth academy trials for a handful of MLS clubs in the United States, including the U14 Columbus Crew, U16 FC Dallas, and San Jose Earthquakes youth academies. He also attended college identification camps, including one at UCLA and EXACT Sports Camp, the latter of which he was selected to play in the final showcase last year, he said. In Japan, he engaged in training and scrimmages with top high school teams in Kagoshima prefecture.

With the experience he gained, the Father Duenas Memorial School junior quickly worked his way up Guam’s elite player pathway and now, may march onto the pitch with the Matao, alongside professional players he grew up watching, during this year’s set of qualification rounds for FIFA World Cup Qatar 2022 and the AFC Asian Cup 2023.

“I believe that Kyle has the ability to play at the professional level and had no hesitation in giving him his debut in the Matao at 16 years of age during the EAFF E-1 Football Championship Round 1 last year,” Dodd said. “He performed very well in the games he played in and should be proud of that. I know when he came back to the island from the EAFF tournament he was seen as a superstar with the kids in the United Airlines GFA Center of Excellence and within his own age group as he proved that age isn’t a barrier and they could all relate to him. You sometimes forget how young he is as he is a very mature person and continues to be humble and work hard, which is a credit to himself, his family and the experiences he has been exposed to.”

Dodd is set to publicly release the final roster of players selected for the FIFA World Cup Qatar 2022 and AFC Asian Cup 2023 Joint Preliminary Qualification Round 1 later this month for home and away legs against Bhutan. The team will travel to Bhutan for the first match of the round on June 6 and then return to Guam to play its second leg at GFA on June 11.

“The Matao is going through a generational change and this four year cycle is seeing the implementation of a new playing style, culture, values, and expectations,” Dodd said. “With that being said, age, location, and/or club is not a factor in selection to the Matao. We now have a talent pool of approximately 48 players that I believe are good enough to be drawn from for selection for tournaments. Selection is based on the best performing players that are willing to wear the shirt with pride, deliver the tactics set out, and be willing to work harder than their opponent. It is great to have a competitive environment and to be able to make tough decisions on leaving players out of the 23 man roster. Having a competitive environment and selection based on performances allows players to be in control of their selection.

“Ultimately it comes down to accountability for performances, with the players ensuring that they are doing everything they can from a training, hydration, diet, sleep, and analysis point of view to optimize their performance. I have seen considerable change in the 15 months I have been on the island and each generation is only going to get better with the full-time national team programs we have at the GFA starting from the COE, youth and the senior teams. We are getting closer to fulfilling our holistic approach to player development with full-time training, a new gym being open, improvements in the medical model, alignment with a professional dietician, and consultancy work with a professional sport psychologist,” Dodd added.

Guam’s home match will kick off at 3:15 p.m. on June 11 at GFA. Tickets to watch the match live will be sold at GFA later this month.

“This is another big step for Guam to play again in FIFA World Cup qualifiers,” Halehale said. “Advancing out of Round 1 will again put Guam on the map and take us another step forward in the development of our national program. For me personally, I look to gain more experience and also to maximize this opportunity. Not many 16-year-olds can say they’ve played at the senior level – I’m excited and grateful for this opportunity.”

Halehale credits his parents, Carlos and Mi Hae Halehale for supporting him and also his uncle Daisuke Tsujimoto, who inspired him to develop a passion for the sport.

“I also would like to thank GFA, GFA Executives, coaches and staff for working to create a professional atmosphere, from overall organization to constantly improving the GFA National Training Center, a world-class facility,” Halehale said. “It’s truly an honor to be able to play and train in this environment. There are many kids who don’t have the chance to play in this type of environment, so I feel fortunate for all the opportunities afforded to me. With the upcoming matches, I look forward to contributing as much as I can to the team and the overall national program.” 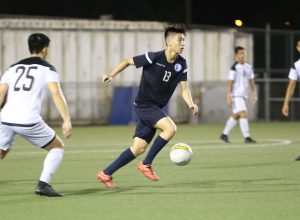 Kyle Halehale looks for options as the opposing team defense converges on him during a recent Matao training session at the Guam Football Association National Training Center. The 16-year-old recently accepted a call-up to the Matao, Guam men’s national team, for the team’s bid in the FIFA World Cup Qatar 2022 and AFC Asian Cup 2023 Joint Preliminary Qualification Round 1. 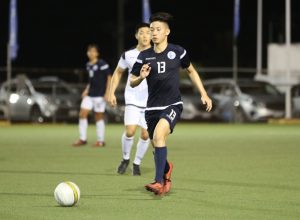 Kyle Halehale advances the ball in the midfield during a recent Matao training session at the Guam Football Association National Training Center. The 16-year-old recently accepted a call-up to the Matao, Guam men’s national team, for the team’s bid in the FIFA World Cup Qatar 2022 and AFC Asian Cup 2023 Joint Preliminary Qualification Round 1. 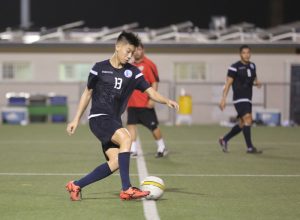 Kyle Halehale plays the ball from the midfield during a recent Matao training session at the Guam Football Association National Training Center. The 16-year-old recently accepted a call-up to the Matao, Guam men’s national team, for the team’s bid in the FIFA World Cup Qatar 2022 and AFC Asian Cup 2023 Joint Preliminary Qualification Round 1.