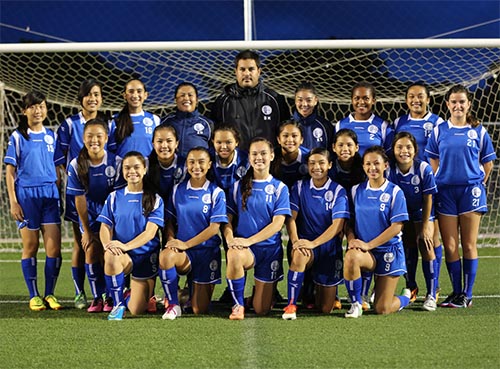 Guam’s U16 women’s national team will face one of its toughest challenges beginning Sept. 26 when the players face Japan in the championship round of the AFC U16 Women’s Championship in Nanjing, China.

“The goal no doubt is to qualify for the semifinals,” said head coach Brett Maluwelmeng. “To say it won’t be easy would be a massive understatement, as we’ll be going up against defending champion Japan in our first match. However, I dare say with our strategy, hard work and a bit of luck, we can sneak a result.

“We play Iran in our other match and despite our opponents being closer to us in playing level, we will need every bit of strength left for the team to get another good result,” Maluwelmeng added.

The team, whose nickname the “Junior Masakada” was taken from the island’s senior side’s moniker, made history last year by becoming the first national team from Guam to qualify on its own merit for the championship round of an AFC tournament. The 2012 team defeated Hong Kong 1-0 on an Olympic goal by Maria Abbey Iriarte in a group qualifier match at the Guam Football Association National Training Center and earned a berth in the championship in China.

“I feel our team has come a long way … and I believe the results we want in China are attainable, ambitious as they may be,” Maluwelmeng said. “I believe this group of young women – our Junior Masakada – have the courage and bravery required to go up against continental giants such as Japan. “Put that together with their improving tactical and technical abilities and we just may pull off the surprise we look to achieve,” Maluwelmeng added.

A total of 12 teams are in the championship round and are divided into four groups, each vying for a spot in the semifinals. The semifinals begin Oct. 3, with the winning team from Group A, which includes China, P.R., Australia and Bahrain, playing against the winner of Group B – either DPR Korea, Chinese Taipei or Jordan. Next, the winner from Guam’s group, Group D, will face the winner from Group C, which features teams from Korea Republic, Thailand and Uzbekistan. The winning teams will move on to the final, while the losing teams play for third place. Only the top three teams overall will represent Asia at the 2013 FIFA U17 Women’s World Cup in Costa Rica next year.