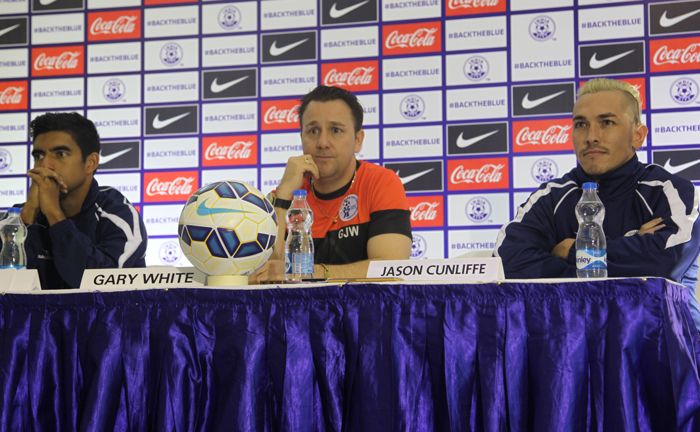 [November 12, 2015 – Bangalore, India] Team Matao have held their final training session ahead of Thursday’s 2018 FIFA World Cup Russia and AFC Asian Cup UAE 2019 Joint Preliminary Qualification Round 2 match with India where they got their first look at the match venue, the Sree Kanteerava Stadium.

With the rain that has been lashing Bangalore finally subsiding the players went through their paces in fine, cool, conditions in the early evening where they looked sharp and eager for matchday to arrive.

The pitch had drained well and the surface that is regarded as one of the best in the country was actually quite firm meaning that Guam will be able to play the style of short-passing, possession based football that they’ve been working on.

Earlier in the day, head coach, Gary White, captain Jason Cunliffe and defender AJ DeLaGarza met with local reporters where they explained that Guam are fully prepared for this decisive clash in Group D.

“This is another huge step in our development,” said White. “We’ve already beaten India once where we played very well and tomorrow you’ll see another determined performance from my side and we look to pick up the three points that will help get our campaign back on track.”

The Matao will depart India immediately at the conclusion of the match to prepare for next week’s home clash with Asian powerhouse, Iran.

Guam is set to face Asia’s No. 1-ranked country, I.R. Iran, at the Guam Football Association National Training Center on Nov. 17. The home match will kick off at 3:30 p.m.

Tickets are on sale at the GFA Main Office daily, with VIP tickets at $25 each, Category 1 and 2 tickets at $20 each, and General Admission tickets at $10 each.