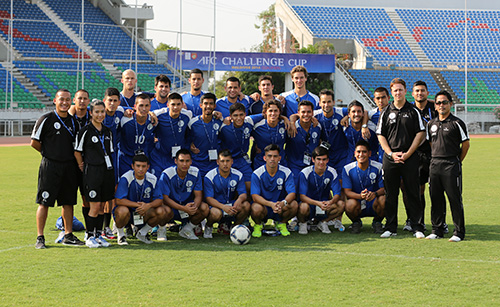 Following the Matao’s recent trend of success, the team and head coach Gary White have received international attention on both FIFA.com and ESPN recently.

“I am very proud of success of the Matao, our men’s national football team, in international tournaments,” said Richard Lai, Guam Football Association president. “One of the goals we had set when bringing in head coach Gary White was to be more competitive in international tournaments. I am happy to note that the success the team has earned, and its overall development in a very short time, not only has been recognized locally, but around the world by media outlets followed by billions of people. This is a great achievement not only for the team and for GFA, but for the whole Guam community.”

FIFA.com recently featured a story on its homepage about the rapid development of the Matao, titled “Little Guam making giant strides.” FIFA.com writes, “Guam’s results might be relatively small steps but in the context of the nation’s football history they are massive strides. They recently participated in the final qualifying stage of the East Asian Football Federation Championship (EAFF), where their performances provided overwhelming evidence of remarkably rapid growth.”

The full article may be viewed at http://www.fifa.com/worldfootball/news/newsid=2016123.html

In addition to the media coverage by FIFA.com, ESPN Playbook writer Chris Gigley featured Matao head coach Gary White is his recent installment “What’s it like to coach a tiny soccer nation?” In the news article Gigley opens with, “The Guam national team is just a speck on the map of world soccer. But in just more than a year on the job, England-born manager Gary White has his squad from the tiny South Pacific island beating opponents it used to lose to by two or more touchdowns. Last year, Guam reached 178th in the FIFA world rankings, its highest position ever.”

The Matao recently competed in the AFC Challenge Cup Group A qualifier in Yangon, Myanmar, where the team defeated Chinese Taipei for the first time in its history – a resounding 3-0 victory over a team that drew 1-1 with host country Myanmar and lost 2-1 in stoppage time against the group’s second place finisher, India.