[October 14, 2018 – Harmon, Guam] – There was no shortage of goals as the Budweiser Soccer League Premier Division officially kicked off Saturday evening at the Guam Football Association National Training Center.

The Islanders’ Aaron Blaz opened his 2018-2019 account with a hat trick in his team’s 6-0 victory over Guam Shipyard to take the second spot on the Golden Boot race. Kioumars Rezaie scored twice for the Islanders and Eddie Cho scored the Islanders’ other goal.

Bank of Guam Strykers’ Jason Cunliffe sits in the third spot in the league’s Golden Boot race tied with Rezaie with a pair of goals in his team’s 5-0 win over the Sidekicks SC. Scott Spindel, Andre Gadia, and Hayden Shedd also scored for the Strykers in the win.

Lots of Art Tattoo Heat’s Gideon Tyquiengco and Jason Miller each scored once in their team’s opening week win over Quality Distributors.

The Premier Division continues Saturday with the Islanders FC taking on LOA Heat and Manhoben Lalahi against Guam Shipyard, both kicking off at 6:30 p.m. In the division’s late matches, the Sidekicks SC will play against the NAPA Rovers FC and the Bank of Guam Strykers will face off against Quality Distributors. Both matches will kick off at 8:30 p.m.

The league’s Amateur Division is played on Thursday and Friday evenings. 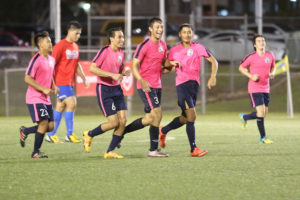 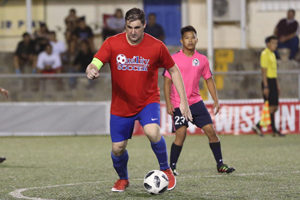 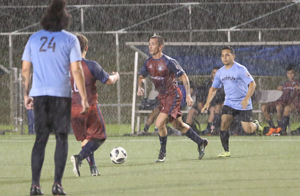 Bank of Guam Strykers’ Jason Cunliffe looks for passing options in the midfield against the Sidekicks SC as the rain begins to fall during an opening week match of the 2018-2019 Budweiser Soccer League Premier Division Saturday at the Guam Football Association National Training Center. The Strykers won 5-0. 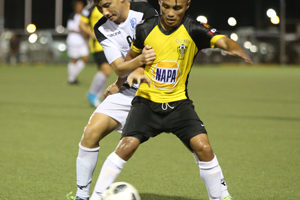 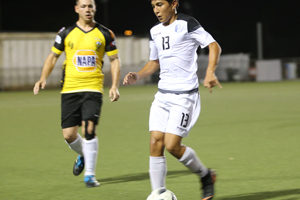 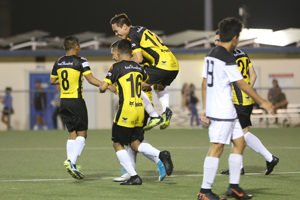 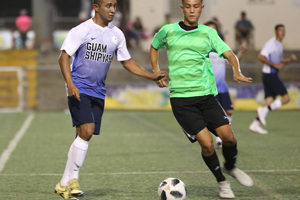 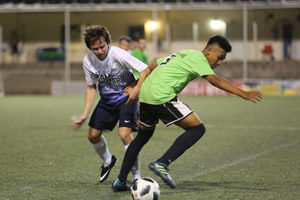