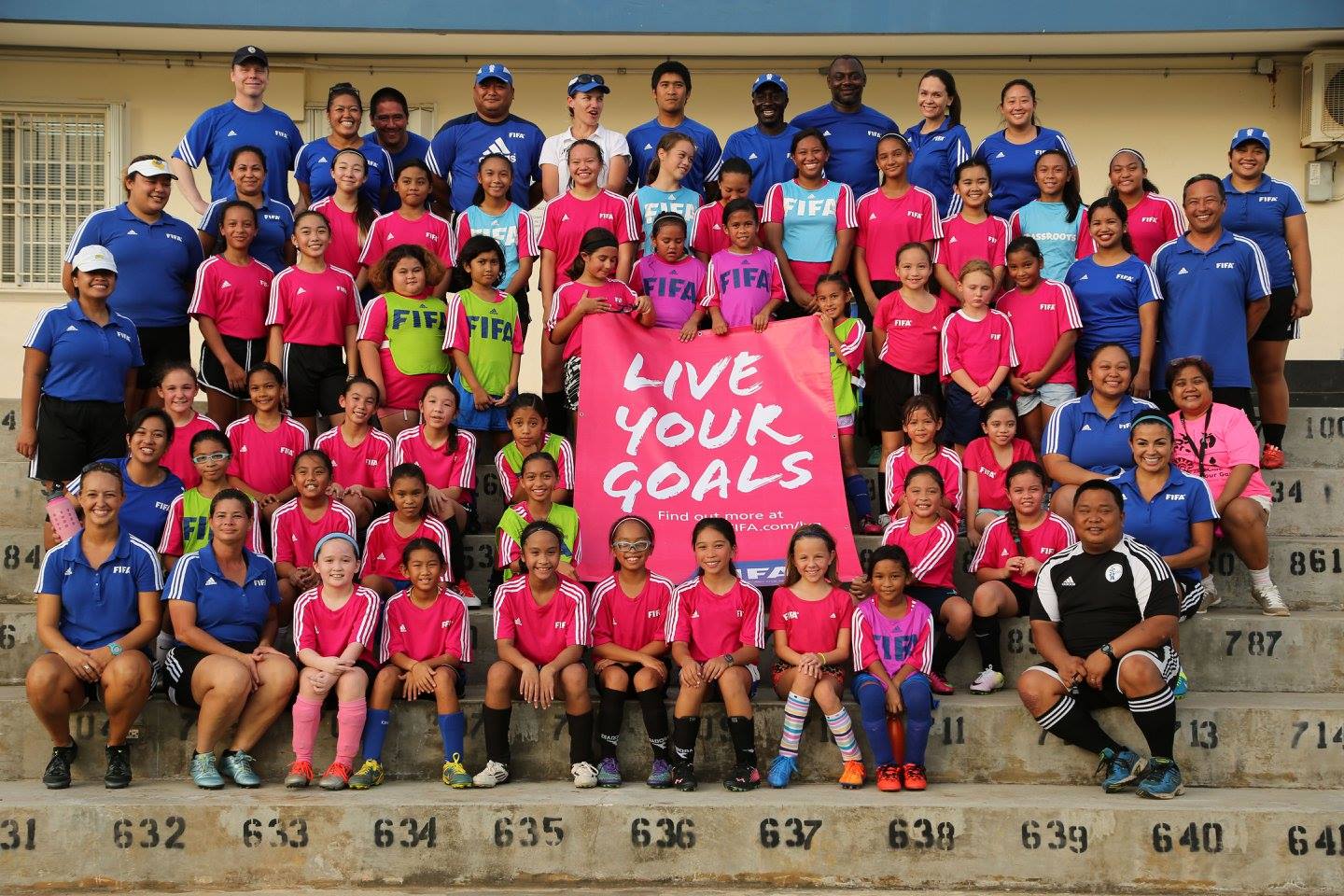 Posted at 19:47h in All Girls, All Girls News, All Leagues by GFA GW Admin

The players engaged in a circuit of soccer-related activities that promoted health, camaraderie, and teamwork for the first hour of the festival and later, applied skills learned from the activity stations in small sided games, all coordinated by coaches participating in the FIFA Women’s Coaching Course facilitated by FIFA instructor Belinda Wilson from Australia.

The coaches worked with Guam youth national coach Sam San Gil in overseeing activity stations. The festival is one of three planned for the year for girls. Each participant received a complimentary FIFA Adidas T-shirt during the festival. Cleats in assorted sizes also were available to participants at the festival while supplies lasted.

Following the FIFA Live Your Goals festival, coaches from the FIFA Women’s Coaching Course participated in a closing ceremony with Wilson. The coaches watched a video summary of the week-long course, presented a plaque of appreciation to Wilson, and received certificates from FIFA for participating in the course.

The coaching course and FIFA Live Your Goals event was featured in a story by Katy Clarke of the Pacific Daily News:

The Guam Football Association hosted the FIFA Live Your Goals Festival Saturday, July 23, which invited girls from across the island to come together for two hours and refine their soccer skills.

“It’s pretty great,” said Anjaelyn Nededog. “It teaches you more about soccer and it’s great that they are doing it here at GFA. Since it’s my favorite sport, I’d love to do this all the time.”

The festival concluded a weeklong FIFA women’s course that saw 30 of Guam’s youth soccer coaches come together and learn more about coaching young women in the sport. Saturday was the first time the coaches were able to put their new coaching methods to the test, and they found the course had been a success.

“I really liked this, … because it’s Live Your Goals and it’s mostly for the youth and for girls,” said Eileen Calleja. “Being a woman myself, I feel like I’m very empowered to influence the younger generations. I grew up with soccer, I played since I was 11, and I see a lot of myself in them. Lots of potential.”

Many of the players were unaware the coaches had just undergone a course, but said they learned a lot from their mentors.

“It’s very helpful,” said Jinae Teria. “These coaches show us and give us tips on how to work on the field. Even when we were doing the small-sided scrimmage, they gave us more tips. It helped us during the games.”

The girls were divided into age divisions to make sure they were learning on a similar level to their peers. The first hour of the festival involved drills the coaches learned throughout the week, while the second hour was for scrimmages that allowed the coaches to apply their newly learned lessons in game-like situations.”