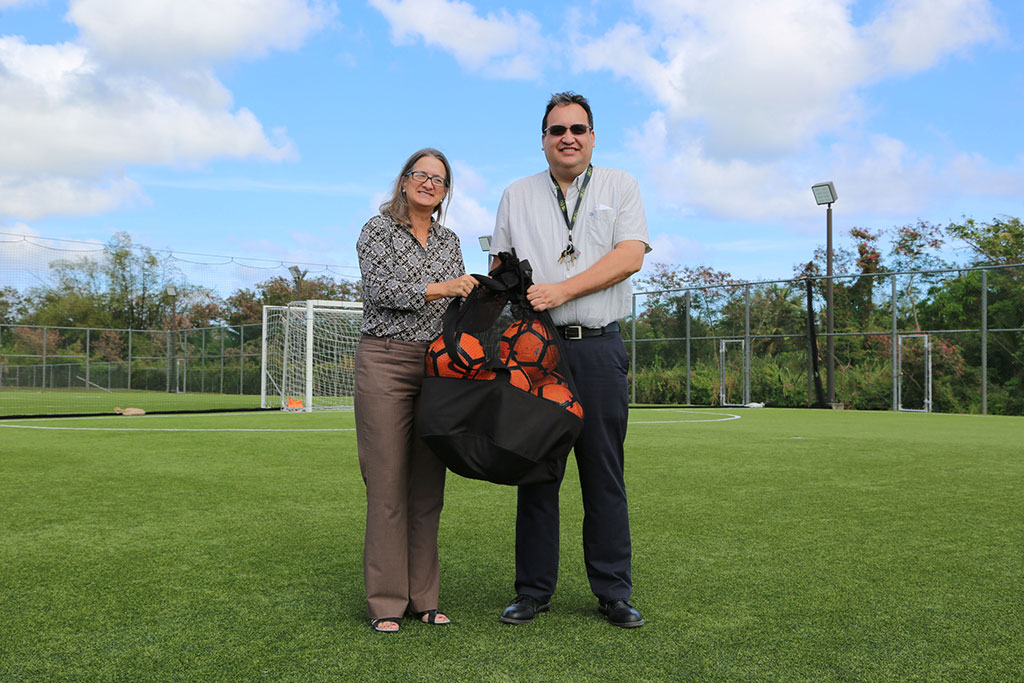 [April 3, 2019 – Harmon, Guam] As part of Guam Football Association’s social responsibility program, the organization recently donated soccer balls to high school teams from both the IIAAG Boys’ and Girls’ High School Leagues, with the latest presentation to Academy of Our Lady of Guam Thursday at the GFA National Training Center.

“With the growing number of players and coaches in the interscholastic leagues, we wanted to help meet the demand with equipment donations,” said Tino San Gil, GFA President. “By providing equipment, we are helping the schools develop their football programs, which will in turn contribute to the overall development of the sport in Guam.

“In addition to equipment donations, we are also looking to assist teams with coaching education courses and referee education courses, as well as options for venues to play matches. We are currently developing fields in the central and southern villages thanks to assistance from FIFA and AFC. Eventually, we are looking to take over and organize all interscholastic soccer leagues,” San Gil added.

The current IIAAG Girls High School Soccer League season is ongoing, with playoffs scheduled to begin next month. The league’s semifinal matches, as well as the consolation and championship matches, are set to be played at the GFA National Training Center May 15 and 18, respectively.

Guam Football Association Executive Director Cheri Stewart presents 10 soccer balls to Academy of Our Lady of Guam Athletic Director Tim Nelson in a short presentation event Thursday at the Guam Football Association National Training Center. The presentation was the latest in equipment donations from GFA to high school teams participating in both the IIAAG Boys and Girls High School Soccer Leagues. The IIAAG Girls High School Soccer League is currently ongoing with playoffs set for next month. Semifinal matches, as well as consolation and championship matches are set for May 15 and May 18, respectively, at the GFA National Training Center.