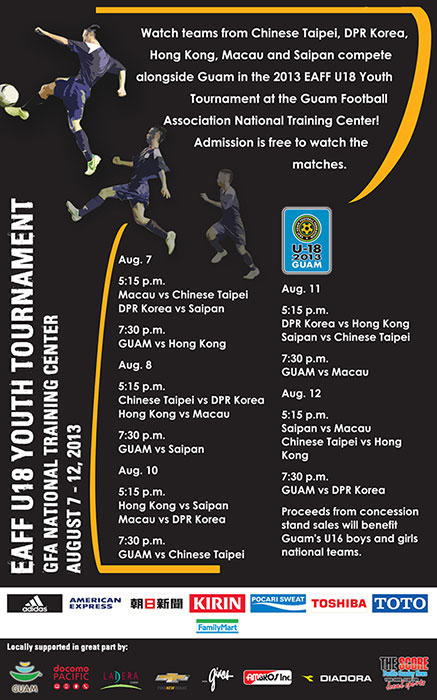 [Macau’s Kam Chi Hou manages to stop Chinese Taipei’s Liu Sheng Yi from taking a close-range shot during an opening day game of the EAFF U18 Youth Tournament at the Guam Football Association National Training Center. Chinese Taipei blanked Macau 2-0.] In the day’s highly anticipated match up, Hong Kong earned a 3-1 victory over Guam in front of about 500 spectators at the upper pitch in cool weather conditions. Guam’s Edwin Wong was credited with scoring Guam’s lone goal in the 75th minute following a free kick play from the right side. After Keith Surber drew a foul from Hong Kong, teammate Nathan Camacho sent in the ensuing free kick into the penalty box. Hong Kong goalkeeper Li Yat Chun rushed out of his box to try to collect the ball, but instead was met by Guam’s Thaddeus Atalig. Li fumbled the catch and an alert Wong raced to finish the shot by heading the ball forward and following it into the goal for the score. Hong Kong’s Wong Chun Hin, Yip Ching Fung and Yiu Ho Ming each scored once in the team’s win over Guam.

In other games, the Northern Mariana Islands defended a 1-0 lead to the halftime whistle with a tight defense led by goalkeeper Christopher Aninzo, but later succumbed to a hungry DPR Korea offense that tallied four goals late in the second half. NMI grabbed the 1-0 advantage in the early seconds of the match after a DPR Korea defender chose to pass the ball back to goalkeeper Song Chang Ho, who was out of position to receive it. The ball rolled into the goal for the quickest goal in the tournament.

On the upper pitch, Chinese Taipei broke the scoreless deadlock against Macau in the 76th minute after forward Liu Sheng Yi finished a cross from captain Chen Chao An. Chinese Taipei later added another goal in the 81st minute on a Jiang Cheng Yu shot from the right side.

Tournament action continues Thursday with Chinese Taipei facing DPR Korea and Hong Kong playing against Macau, both at 5:15 p.m. Guam enters the second day of competition with a match against northern rivals NMI at 7:30 p.m. The community is encouraged to support Team Guam during the tournament, as the team looks to bounce back from Wednesday’s match. There is no admission fee to watch the matches. 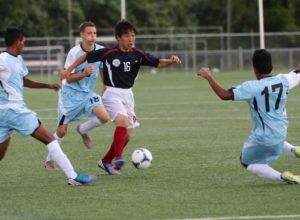 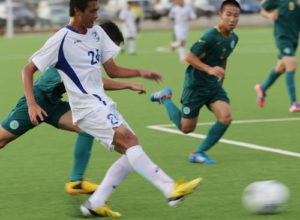 Chinese Taipei’s Liu Sheng Yi finds space to send a cross into the box against Macau during an opening day game of the EAFF U18 Youth Tournament at the Guam Football Association National Training Center. Chinese Taipei blanked Macau 2-0. 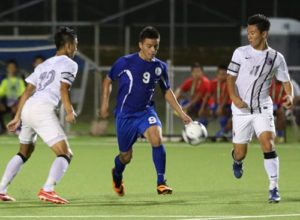 Guam’s Austin Cruz controls the ball as Hong Kong’s Law Hiu Chung (11) and Lai Hau Hei (12) begin to converge on him on defense during an opening day game of the EAFF U18 Youth Tournament at the Guam Football Association National Training Center. Hong Kong defeated Guam 3-1. 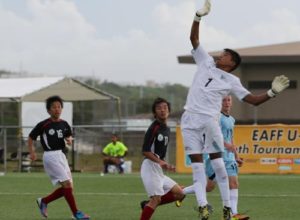 Northern Mariana Islands’ goalkeeper Christopher Aninzo leaps to punch out a shot on goal by DPR Korea during an opening day game of the EAFF U18 Youth Tournament at the Guam Football Association National Training Center. DPR Korea defeated NMI 4-1. 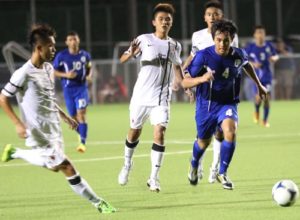 Guam’s Thaddeus Atalig sprints to gain control of the ball ahead of Hong Kong defenders during an opening day game of the EAFF U18 Youth Tournament at the Guam Football Association National Training Center. Hong Kong defeated Guam 3-1. 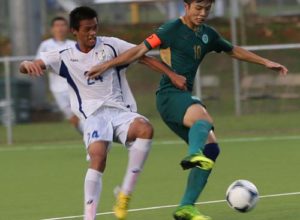