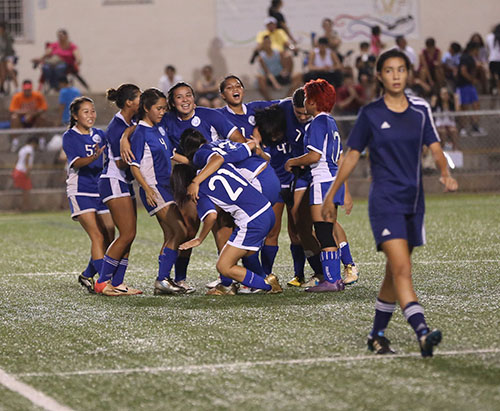 Posted at 02:43h in Interscholastics, News by GFA GW Admin

It will be deja vu Friday in the championship game of the IIAAG Girls High School Soccer League.

The Dolphins edged the Simon Sanchez High School Sharks 3-2 in the afternoon match, while the Royals blanked the Academy of Our Lady of Guam Cougars 2-0 in the early evening match. The Dolphins will play the Royals Friday at 6:30 p.m. at the GFA National Training Center. The Sharks and Cougars will play for third place in the league at 4:30 p.m., also at the GFA National Training Center.

In the earlier game, the undefeated Dolphins overcame an early scare, giving up a goal to the Sharks’ Maria Abbey Iriarte in the fifth minute. After gaining possession of the ball in the midfield, Iriarte sprinted up the right wing and sent her shot successfully to the opposite post for the 1-0 advantage.

Paige Surber later snuck in a goal in the final minute of the half, winning the ball against two Shark defenders and eluding the Sharks goalkeeper Lowella Diramos, who was drawn out on the play. Diramos replaced Besagar earlier in the half after a collision on a Tianna Sakaba shot sent Besagar to the Sharks bench as a precaution.

Sakaba later got on the scoreboard with a goal in the 70th minute off an assist from Zoe Surber to help her team to a two-goal advantage. Despite the 3-1 score, the Sharks refused to surrender. Less than five minutes later, a foul in the box sent Iriarte for a penalty kick opportunity. Although Southern goalkeeper Lorraina Sanchez blocked Iriarte’s shot, the Dolphins were unable to clear the ball, allowing Akiko Naval to sneak in the final goal of the match.

In the evening game, the Cougars, who earned their semifinal spot after defeating the John F. Kennedy High School Islanders only a day before the Hagatna school’s match against Notre Dame, began the game pressuring Royal defenders on the wings. Early on, the Cougars’ Andrea Odell sent a pass to teammate Gemilie Ilao, who was unmarked in the center facing the goal. Luckily for the Royals, Ilao’s shot sailed over the crossbar and kept the contest scoreless.

The Royals’ Demi-Rae Shimizu broke the deadlock in the 26th minute, sending in an accurate long distance shot from the right side that managed to escape the reach of Academy goalkeeper Mya Sanchez.

Notre Dame was able to hold on to the slim 1-0 lead against the Cougars through to halftime and well through the deciding half. The Royals earned their last goal in the final minute of regular time on a penalty kick opportunity awarded to them after an Academy defender accidentally caught the ball in the box. Shimizu completed her brace, successfully sending her shot to the left post for the final score.

All are welcome to watch the championship match Friday. There is an entrance fee of $2 per high school student or below and $5 per adult. Food and drinks are available at a concession stand on site organized by the Guam U14 girls national team. The team is raising money to help with travel expenses to China for the 2014 AFC U14 Girls Regional Tournament in June.