Cunliffe, Matao ready to take on Cambodia in AFC Playoff Round 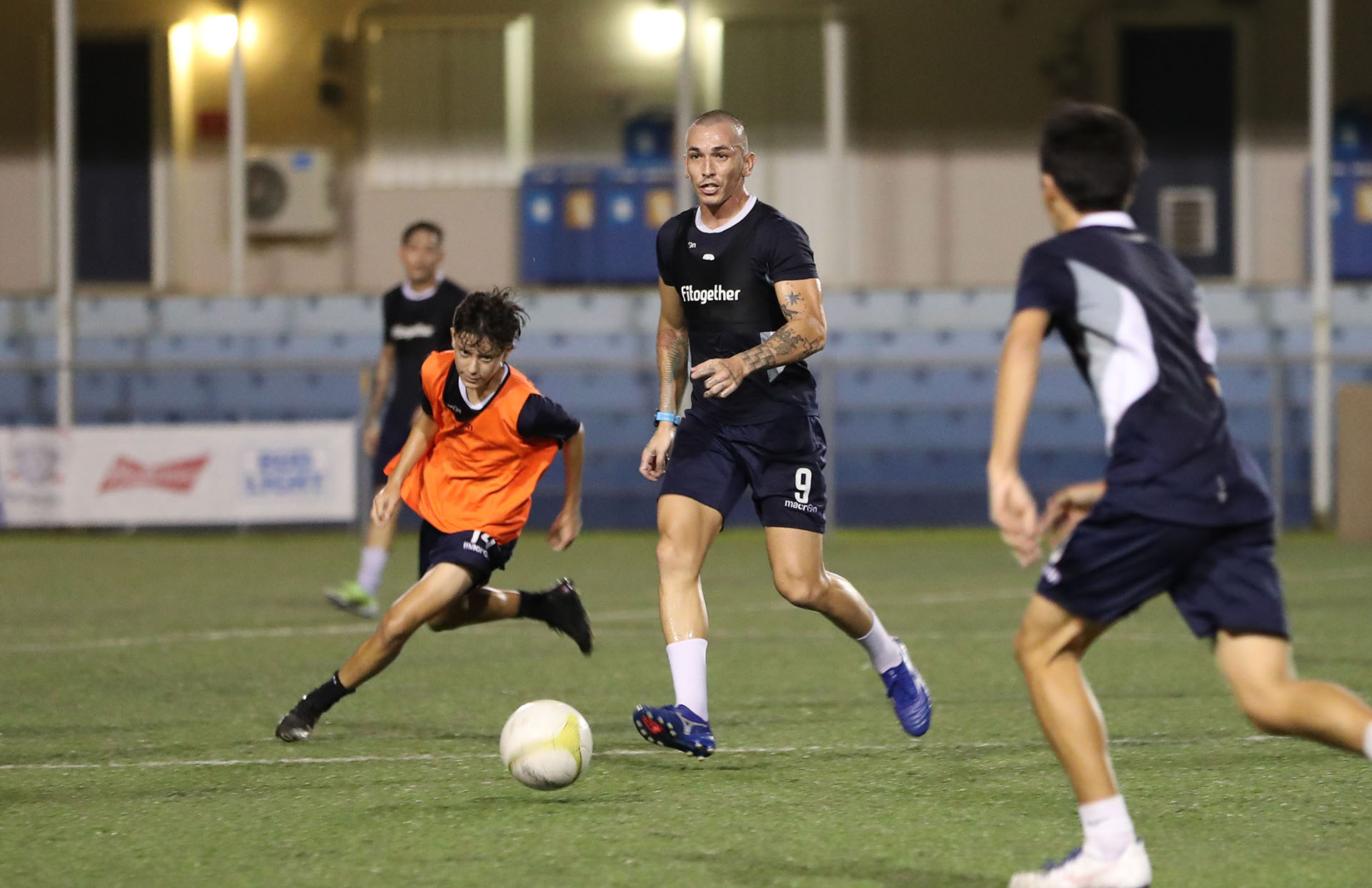 01 Oct Cunliffe, Matao ready to take on Cambodia in AFC Playoff Round

[October 1, 2021 – Harmon, Guam] The Matao, Guam National Team, will be looking to punch its ticket to the AFC Asian Cup China 2023™ Final Qualification Round with a win over Cambodia in the tournament’s upcoming Playoff Round beginning Oct. 9 in Bahrain.

“I expect a much better (Cambodia) team this time around as they have their professional domestic league, which most, if not all, of their players play in,” Cunliffe said. “That league is currently underway so their players should be pretty sharp. They are also battle-hardened after their (FIFA World Cup Qatar 2022™ and AFC Asian Cup China 2023™ Preliminary Qualification Round 2 matches) and like us, they will be hungry for results so they can guarantee themselves more matches. Combine all of that with the influence of their Coach, Keisuke Honda, and I believe it will add up to two very tough matches for us.”

A little over 15 years ago, Cunliffe earned his first two international caps for Guam at the AFC Challenge Cup Bangladesh 2006, with his second cap coming against Cambodia – the first of two matches Guam has played against the Southeast Asian nation in its history. Seven years later, Cunliffe played in an international friendly match against Cambodia at the National Olympic Stadium in Phnom Penh. He is the only player in Guam’s most recent squad to have played in both matches. Guam and Cambodia currently are 1-1 in head-to-head competition; Cambodia won 3-0 in 2006 and Guam won 2-0 in 2013.

“The first match against Cambodia was my second cap and we actually played them twice,” Cunliffe said. “The first game, we were tied 0-0 right before halftime and then a huge monsoon hit us. Signage was flying across the field and everything – it was pretty nuts. So, they abandoned that match and made us replay the game a day later at a new venue and during the day. Suffice it to say, we weren’t quite up for it anymore. 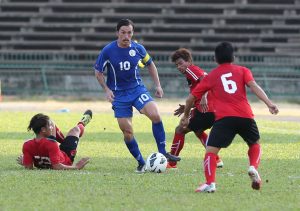 Guam’s Jason Cunliffe controls the ball in the midst of a trio of Cambodia defenders during a FIFA international friendly match at the Olympic Stadium in Phnom Penh on Nov. 19, 2013 in this file photo. Guam shut out Cambodia 2-0 in the contest.

“The second match against Cambodia, you could tell that they were in a rebuilding phase, similar to us. They battled hard, but we outclassed them on that day,” Cunliffe added.

Guam was placed in the Playoff Round as one of four of the bottom-ranked teams from the FIFA World Cup Qatar 2022™ and AFC Asian Cup China 2023™ Preliminary Qualification Round 2, along with Cambodia, Chinese Taipei, and Indonesia. An official draw was held Jun. 24 for the Playoff Round, which saw Guam drawn against Cambodia and Chinese Taipei drawn against Indonesia.

To get to this point in the competition, the Matao played in a total of 11 matches related to the tournament, including Qualification Round 1 Playoff Round home-and-away matches against Bhutan, eight matches in Qualification Round 2, and a training camp in Chinese Taipei.

In Qualification Round 2, Guam played in five matches in 2019 before the COVID19 pandemic delayed the team’s final three matches against the Philippines, China PR, and Syria. Instead of continuing in a home-and-away format, FIFA and AFC changed the round to follow a centralized format with all remaining Group A matches to be played in Shanghai, China PR.

Guam played its match against China PR before both teams were forced to change venues to Sharjah, UAE due to issues with the entry of other participating teams in the group into Shanghai. The unexpected changes, as well as limited and costly airline tickets and penalty fees for travel within Asia, wiped out the team’s competition budget for the tournament in 2021.

The 11 matches – three played at the GFA National Training Center and eight played abroad in Bhutan, China PR, Chinese Taipei, Maldives, and UAE – cost $1.48 million, a much larger cost than budgeted for the Masakåda, Guam Women’s National Team, and all of Guam’s Youth National Teams combined for the same time period. GFA sought assistance from AFC for funding for further competition in the continent’s premier tournament; however, AFC indicated that no funding would be made available for remaining teams in the tournament.

Not wanting GFA to withdraw the team from the Playoff Round, Cunliffe and others on the team engaged in fundraising efforts within each of their personal networks and with their families, drawing up cash to assist in costs for individual players’ airline tickets to Bahrain and accommodations. GFA will be paying for all other costs, including salaries and airline tickets for the team’s staff, as well as their accommodations. GFA also coordinated with the Bahrain Football Association to substantially minimize costs in the West Asian country for Guam’s matches.

“Per usual, our fans can expect us to battle for 90-plus minutes each match. We have a good, hungry group of veterans and younger boys who are ready to compete and will do just about anything to get the results we need. We’ve been in a similar situation before when we had to play a two-legged tie with Bhutan, so we won’t be overwhelmed by the occasion. Everyone is really excited about the opportunity to represent our beautiful island, no one more than yours truly,” Cunliffe added.

Guam National Head Coach Sang Hoon Kim is expected to announce the final roster of traveling players and staff in the coming week.

The winners from each of the Playoff Round pairings will join 22 other teams that had qualified from Round 2 matches in the continental tournament’s Final Qualification Round, the AFC Web site states.

The 24 teams in AFC Asian Cup China 2023™ Final Qualification Round will compete in 2022 for 11 available slots in the tournament’s final round in China in 2023. 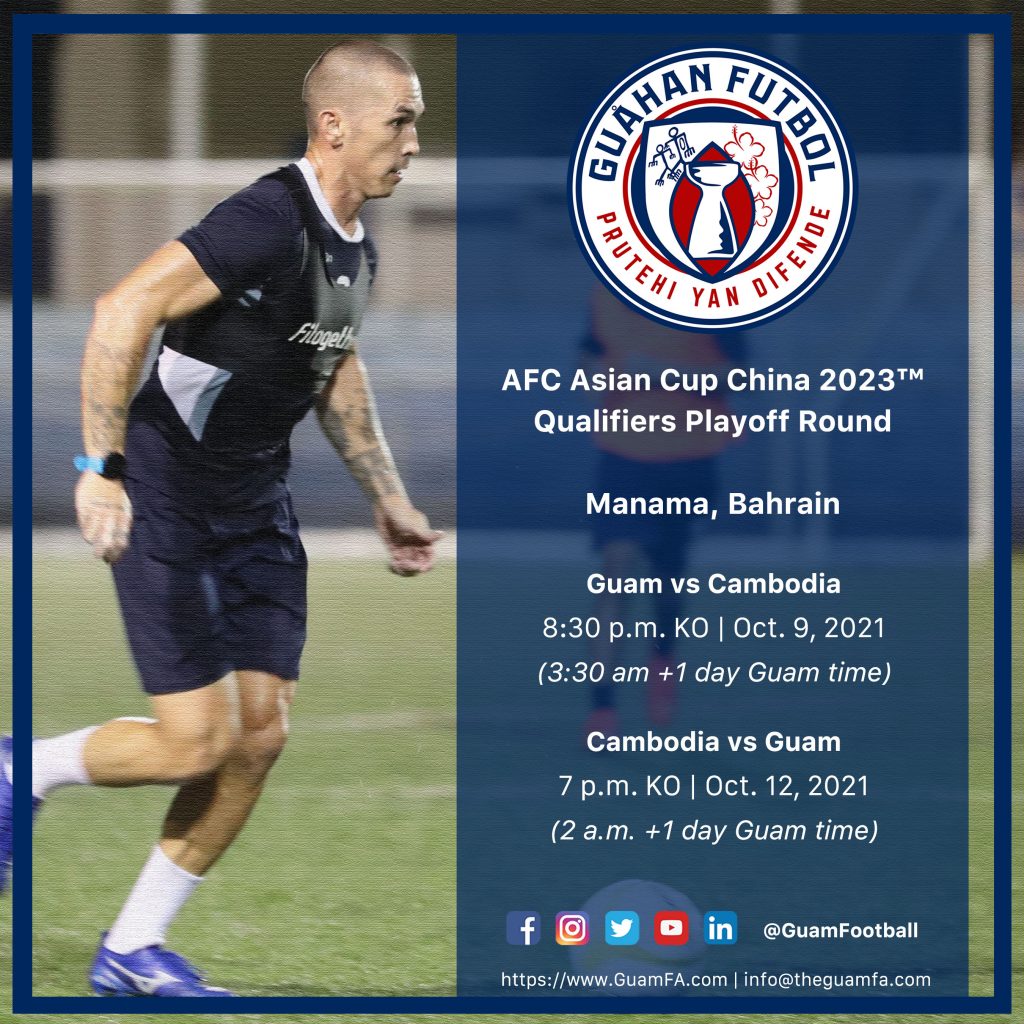