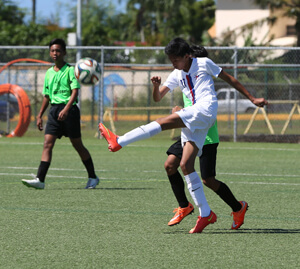 “Coming to Guam and playing in a tournament like this one is a great experience for me and my club teammates,” said Tan Holdings FC’s Taka Borja, a student at Garapan Elementary School in the Northern Mariana Islands. “We get to play against other club teams with different playing styles that we don’t usually play.

“Also, it is my first time playing on artificial turf,” Borja added.

Borja, who had just turned 12 a week before the tournament, will move up to the U15 division of the NMI Football Association Youth Soccer League next season and is also using the tournament to gain playing experience against older players, he said.

Tan Holdings FC fell to the Guam Shipyard Wolverines 4-2 in the team’s lone fixture of opening day in the U14 division. Shaun-Paul Martinez and Michael Lee each scored twice for the Wolverines in the win. Borja and teammate Joshua Waldo scored for Tan Holdings FC.

In other U14 division matches, the ASC Trust Islanders defeated visiting Don Bosco from the Philippines 5-1 with three goals from Shawn Sablan and two from Kein Artero. Fred Aragones scored for Don Bosco.

In the U18 division, the Wings defeated visiting team Matansa, of the Northern Mariana Islands, 3-1. Jordan Jasmin scored twice for the Wings and Daniel Kim scored the team’s other goal. Jether Yobech scored Matansa’s lone goal of the contest.