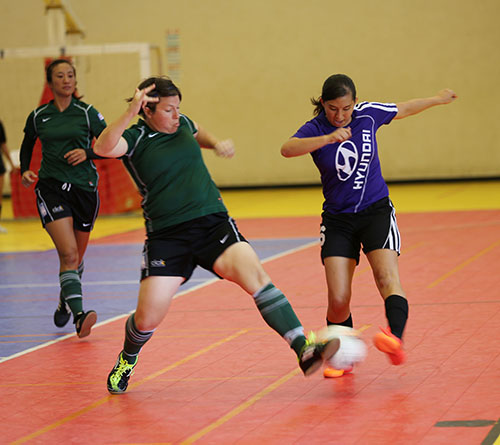 The No. 2 Paintco Lady Strykers will play No. 3 Doosan Lady Crushers in the first round of playoffs of the Bud Light Women’s Futsal League Friday at 6:30 p.m., followed by No. 1 Quality Distributors against No. 4 dck Masters at the Guam Sports Complex Gym.

The dck Masters nabbed the fourth-ranked spot in league standings, dashing Hyundai’s hopes for a playoff berth, with a narrow 5-4 win in the final week of the regular season.

After the Masters took a 2-0 lead on goals from Blanda Camacho and Rhoda Bamba, Hyundai goalkeeper Jena Cruz started off her team’s scoring campaign with a drop-kick for goal from the other end of the court eight minutes into the match.

Later, a pair of left-side goals from Shana Spindel put Hyundai up 3-2 by halftime. The Masters leveled the match three minutes into the second half when Christine Simard connected on a Kyung Shipman corner kick. Four minutes later, Ashley Besagar managed to steal the ball from Bamba and sent the ball to teammate Honoka Recella, who finished the play to give Hyundai the lead again.

Later, the Masters’ Pauline Toves saved a ball from going out of bounds and passed it to Bamba, who was unmarked near the goal, for the equalizer. Hyundai, needing only at least a draw to move on to the playoffs, then played a tighter defensive game, many times working in tandem to prevent shots from the Masters. The Masters took advantage of the double-teaming strategy when Shipman was left unattended in front of the goal and connected on a Camacho pass for the eventual game winner. Hyundai was unable to find an answer in the remaining three minutes of play before the buzzer to give up the remaining spot in the playoff race.

In other final week matches, the Lady Crushers defeated Pika Soccer Club 5-2 with two goals each from Kattie Mills and Brandi Potter. Andrea Odell also scored for the Crushers. Yvonne San Nicolas scored for Pika. Pika’s other goal came on a Lady Crushers own goal.

Quality Distributors solidified its spot on top of the league rankings with a 13-4 win over the University of Guam Tritons. Quality’s Paige Surber, the league’s Golden Boot winner, brought up her goal haul to 27 with four goals in the win. Alisia Barcinas scored twice for Quality and teammate Chyna Ramirez also knocked in two goals on drop-kicks from her goalkeeper position. Jodie Barnhouse, Jaime Soriano, Estelle Alig, Vanessa Quinata and Elyssa Santos also scored for Quality. Simie Willter led UOG with a hat trick and teammate Janice Piolo scored once. 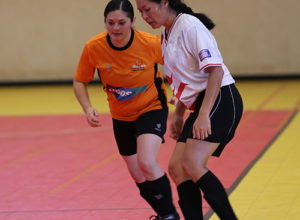 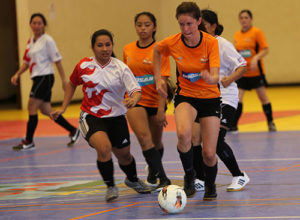 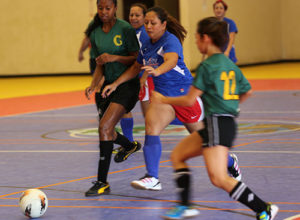 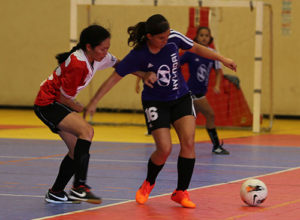 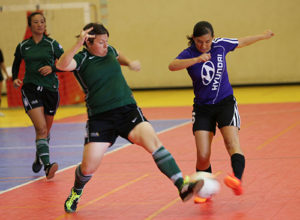 The dck Masters’ Christine Simard extends her leg to stop a shot attempt from Hyundai’s Shana Spindel during a final week match of the Bud Light Women’s Futsal League at the Guam Sports Complex Gym. The Masters edged Hyundai 5-4. 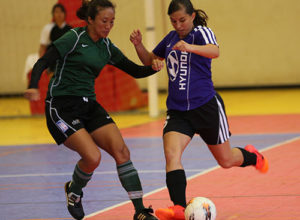 Hyundai’s Shana Spindel gets ready to take a shot facing defensive pressure from the dck Masters’ Kyung Shipman during a final week match of the Bud Light Women’s Futsal League at the Guam Sports Complex Gym. The Masters edged Hyundai 5-4. 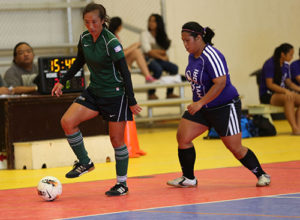 Hyundai’s Ashley Besagar looks for her chance to try to steal the ball from the dck Masters’ Kyung Shipman during a final week match of the Bud Light Women’s Futsal League at the Guam Sports Complex Gym. The Masters edged Hyundai 5-4.