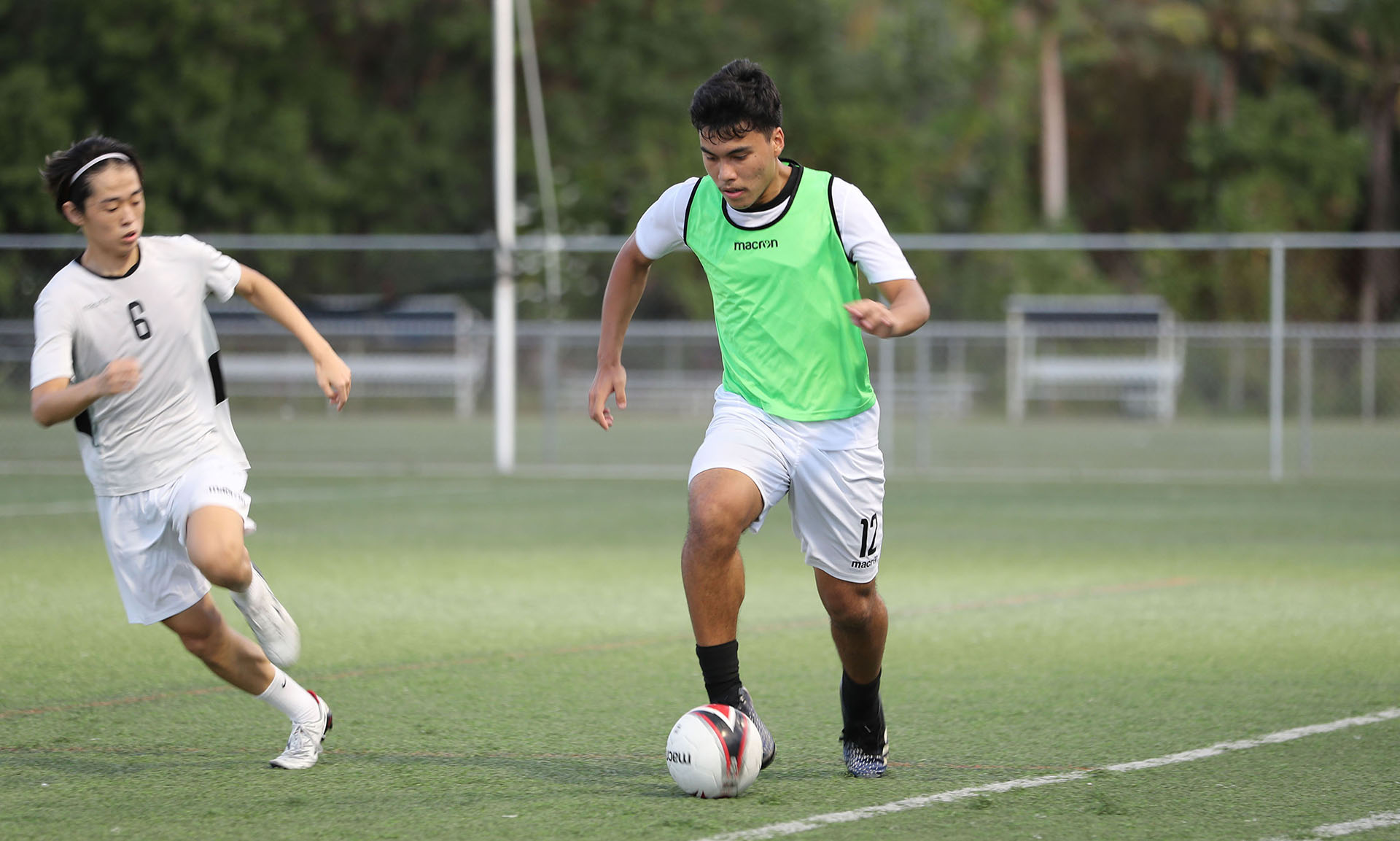 Posted at 08:09h in News, U20 Manhoben Tournaments by GFA Website Manager
[July 7, 2022 – Harmon, Guam] Shane Becker will take another step forward toward his dream of playing soccer professionally later this summer after signing a letter of intent to enroll at and play intercollegiate men’s soccer for the Bushnell University Beacons.

“I’ve been working hard in order to achieve the biggest goal in my life, which is to play professional soccer,” Becker said. “Going to college for a degree and to also play soccer is the next step in order to achieve my future goal. Not only will it help me further prepare for high, intense game play, it will strengthen me mentally. My motivation is knowing that I represent my family, friends, and the whole island of Guam.

“Knowing that it will be a long, uphill battle, I’m hoping that all the hard work that I’ve done and continue to do up to this point will help me be successful at Bushnell University,” added the 2022 graduate of Simon Sanchez High School.

“I think it’s important for all players to play at the highest level possible, as our coaches now have the dilemma of a selection pool composed of very talented domestic players and players abroad competing in various football environments,” said Dominic Gadia, Guam U20 National Team Head Coach. “Gone are the days of just showing up to training and getting to wear the shirt. There’s an expectation to leave that shirt in a better place now than the ones who donned it previously.”

The Bushnell University Beacons compete in the Cascade Collegiate Conference of the NAIA Division I. Bushnell Athletics also has a reputation for strong academic achievement among its athletes, the Bushnell Athletics Web site states. The Web site further states, “The Cascade Conference recognizes the best academic athletes programs each year with the President’s Cup and Bushnell is the only school in the CCC to earn that distinction in each year it was been awarded.”

Becker started playing soccer at the U8 level with Dededo Soccer Club in the Triple J Auto Group Robbie Webber Youth League and later played for the same club in the Aloha Maid Minetgot Cup Elite Youth League. He also played for the NAPA Rovers FC in the Amateur Division of the Budweiser Soccer League. He is currently with Quality Distributors FC.

Becker also played for the Simon Sanchez High School Sharks and was captain for the SSHS side that competed against the John F. Kennedy High School Islanders for the 2022 ISA Boys High School League title.

Becker currently trains with the Guam U20 National Team as the team continues its’ preparations for the AFC U20 Asian Cup Uzbekistan 2023™ Qualifiers in September. Guam was drawn into Group C and will play against Japan, Yemen, Palestine, and host country Laos. Guam’s four matches of the tournament will be played at the New Laos National Stadium | KM16 in Vientiane, Laos Sept. 10-18.

Becker is the son of Robert and Ema Becker and has two brothers and one sister: Ian, Mason, and Leila.

Shane Becker plans to major in Computer Science with an emphasis in Software Engineering. He will depart Guam the first week of August to Oregon, he said. 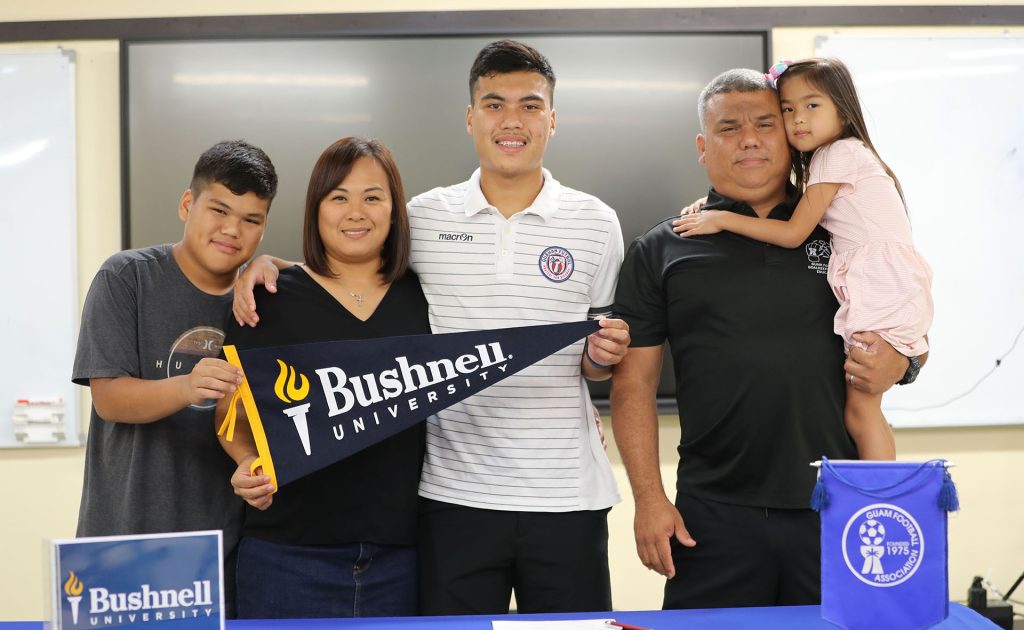 Shane Becker, in center in white polo shirt, poses with his family during a college signing/presentation event at the Guam Football Association National Training Center Lecture Hall Thursday afternoon. Becker signed a Letter of Intent to play men’s soccer for the Bushnell University Beacons and will depart the first week of August to Oregon. In the photo are, from left to right: Mason (brother), Ema (mother), Shane Becker, Robert (father), and Leila (sister). 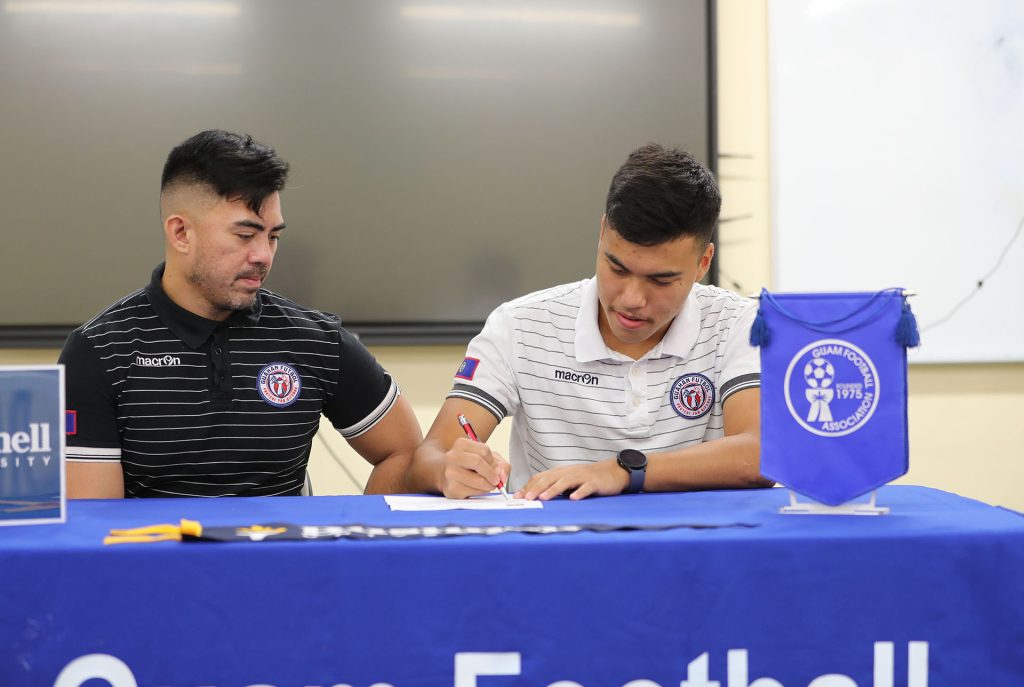 Shane Becker, in white polo shirt, signs a Letter of Intent to enroll at and play intercollegiate men’s soccer for Bushnell University in Oregon, as Dominic Gadia, Head Coach of the Guam U20 National Team looks on during a college signing/presentation event at the Guam Football Association National Training Center Lecture Hall Thursday afternoon.