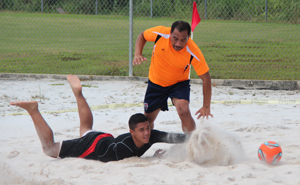 Defending champion and No. 1 Quality Distributors will face off against No. 4 Crushers FC White in the first playoff match of the Land Shark Beach Soccer League, followed by No. 2 Paintco Strykers and No. 3 Crushers FC Orange, Sunday, at the Guam Football Association National Training Center beach soccer court.

The Crushers FC White managed to nab the fourth and final spot in the playoffs, starting off with a 16-12 victory over last season’s runner up Doosan FC. Despite an 11-8 loss to Crushers FC Orange later in the day, the Crushers FC White sent off Doosan by maintaining a greater goal differential than the 2013 finalists through to the final whistle of the regular season.

In other matches, the Strykers, 2012 champions, blemished Quality Distributors’ perfect record with an 8-4 victory led by Ryota Nault’s hat trick. Shawn Spindel and William Kerr each scored twice and Francis Chargualaf scored the Strykers’ other goal. Jimmy Bush scored twice for Quality and Scott Spindel scored once. Quality’s other goal came on a Strykers own goal.

Shawn Spindel won the league’s Golden Boot award, netting 29 goals, three ahead of teammate Nault, who came in second at 26. Spindel’s younger brother, Scott, who had been leading the race up until the final week, dropped to third with 24 goals.
Playoff action begins at 2 p.m. Sunday. The consolation match will kick off at 4 p.m., followed by the championship match at 5 p.m. A short awards ceremony will be held after the conclusion of the championship match. 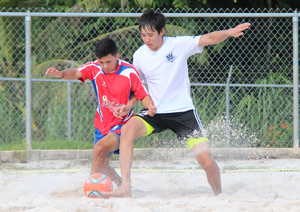 The Paintco Strykers’ Ryota Nault and Quality Distributors’ Phillip Ogo battle for possession of the ball during a Week 5 match of the Land Shark Beach Soccer League at the Guam Football Association National Training Center. The Strykers upset Quality 8-4. 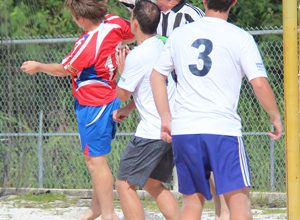 The Paintco Strykers’ goalkeeper Dave Bush pushes the ball away to prevent a header by Quality Distributors’ Scott Spindel during a Week 5 match of the Land Shark Beach Soccer League at the Guam Football Association National Training Center. The Strykers upset Quality 8-4. 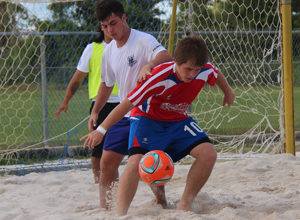 Quality Distributors’ Scott Spindel tries to turn to the goal to shoot facing defensive pressure from his brother, the Paintco Strykers’ Shawn Spindel, during a Week 5 match of the Land Shark Beach Soccer League at the Guam Football Association National Training Center. The Strykers upset Quality 8-4. 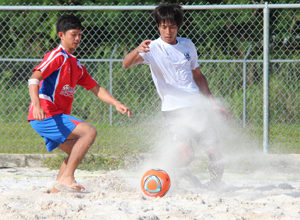 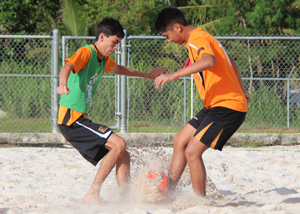