Bank of Guam GFA Cup Kicks Off With Round 1 Matches 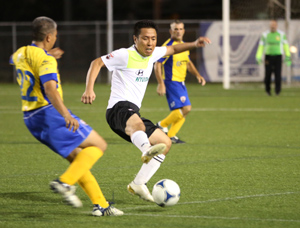 Hyundai Family FC, IT&E/IP&E, and FC Beercelona all live to see another match in the Bank of Guam 7th Annual GFA Cup after posting first-round victories in the single-elimination tournament at the Guam Football Association National Training Center.

Hyundai Family, the first team to earn its spot in Round 2, needed over two hours to defeat the Rovers Masters 4-2.

With the scored tied at 1-all after regulation time, Hyundai Family struck first with a goal from Chul Park midway through the first half of extra time. Hyundai Family, playing with only 10 men due to a red card before the final whistle of regulation time, managed to keep the Rovers Masters at bay for the remainder of the half, but later failed to contain the Rovers Masters’ Ian Lawton in the opening minutes of the second half, leveling the match again at 2-all.

Eight minutes later, Hyundai Family’s Se Lim found space on the right side to advance the ball within striking distance and took a shot that ended up ricocheting off the near post and into the goal for the eventual game winner in the 125th minute. Byung Choi later nailed the victory for Hyundai Family with the marathon match’s final goal in the 132nd minute.

In other Round 1 matches, IT&E/IP&E blanked the Paintco Strykers 4-0 with a pair of goals from Matthew Elwell and one each from Brett Webster and Manoucher Sabeti.

In the final Round 1 match of the tournament, the Pago Bay Disasters’ Freddy Cepeda scored in the fourth minute, but opponent FC Beercelona later came back for the 3-1 win.

After a Pele Torres goal in the 22nd minute leveled the match, FC Beercelona pulled ahead for the first time with an arched shot from the left side by William “Bucky” Brennan in the 52nd minute that sailed over Disasters keeper Gavin Santos. Two minutes before the final whistle, it was deja vu for the Disasters with another similar shot by Brennan to seal his team’s victory.

FC Beercelona’s next match will be against the Ambassadors 7 p.m. Monday.

The tournament’s other Round 2 match pitting the Crushers FC and the FC Shotguns will kick off at 6 p.m. Saturday. 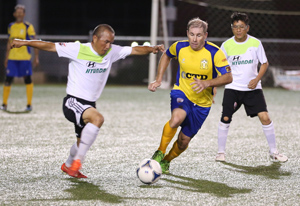 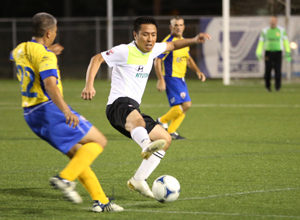 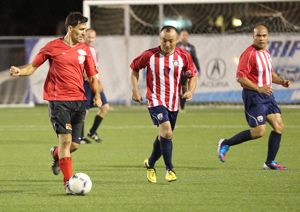 IT&E/IP&E Kevin Malakooti looks to advance the ball to the goal past Paintco Strykers Masters defenders Makoto Suzuki and Leo Diaz during a Round 1 match of the Bank of Guam 7th Annual GFA Cup at the Guam Football Association National Training Center. IT&E/IP&E defeated the Strykers Masters 4-0. 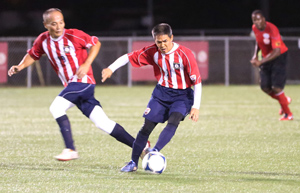 The Paintco Strykers Masters’ Rod Hidalgo controls the ball in the midfield as teammate Susumu Morimoto moves to the right side in anticipation of a pass to the wing against IT&E/IP&E during a Round 1 match of the Bank of Guam 7th Annual GFA Cup at the Guam Football Association National Training Center. IT&E/IP&E defeated the Strykers Masters 4-0. 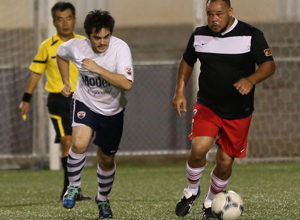 FC Beercelona’s Pele Torres puts defensive pressure on Pago Bay Disasters’ Seabrook Bizzle as he looks to pass the ball during a Round 1 match of the Bank of Guam 7th Annual GFA Cup at the Guam Football Association National Training Center. FC Beercelona defeated the Disasters 3-1. 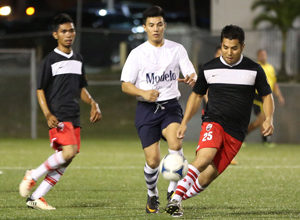 The Pago Bay Disasters’ Manny Cruz gains possession of the ball ahead of FC Beercelona’s Joe Cruz during a Round 1 match of the Bank of Guam 7th Annual GFA Cup at the Guam Football Association National Training Center. FC Beercelona defeated the Disasters 3-1.