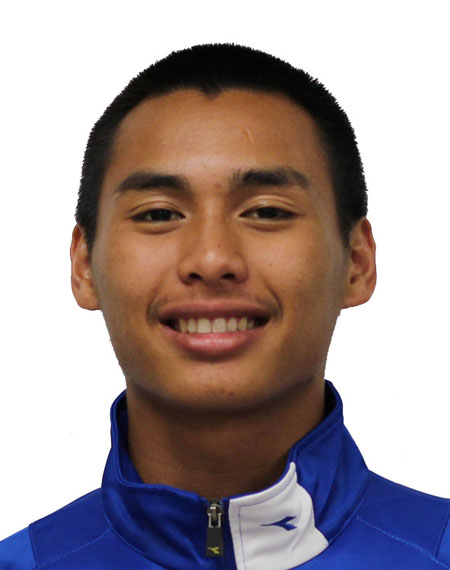 Posted at 05:21h in Matao Tournaments, Men's: Matao by admin

Recent St. John’s School graduate Thaddeus Atalig will change out his red and white Knights soccer jersey for an orange and brown Falcons jersey when he plays for Bowling Green State University in Ohio this fall.

Atalig recently was granted an athletic scholarship – thanks in part to Matao head coach Gary White and the Guam Football Association technical department – to play for the NCAA Division I school that competes in the Mid-American Conference against teams like Kent State, Northern Illinois and Akron, the latter ranked No. 5 in the 2012 NCAA Division I Men’s Soccer Tournament.

“I’m excited at the opportunity to play soccer at a high level in college,” Atalig said. “I hope to contribute a lot to the team through my hard-working nature and also bring my international playing experience from matches I’ve played in for the Matao, Guam men’s national team.”

Atalig first traveled with the Matao in June 2012 to the Philippines for an international friendly match against the Azkals. He later made his debut with the Matao during the Philippines Football Peace Cup as a second-half substitute in Guam’s 3-0 win over Macau. Atalig later earned his first starting spot with the team at the East Asian Cup semifinal round in Hong Kong in Guam’s match against Australia, a team ranked No. 36 in the world in 2012. Earlier this year, Atalig played key starting roles in Guam’s matches against India and also in the island’s 3-0 win over Chinese Taipei in the AFC Challenge Cup qualifier in Myanmar. In Guam’s win over Chinese Taipei, Atalig assisted Ian Mariano’s goal in the 54th minute.

“We are extremely excited about bringing TJ into our program,” said Eric Nichols, the Falcons’ head men’s soccer coach, through E-mail. “His experiences with the GFA have afforded him the opportunity to play at a very high level. Those experiences are invaluable and we can’t wait to introduce his skill set into our system. “We have been very impressed with the progress of the GFA since Coach White took over. There is a ton of potential and with the leadership that is in place, the future is extremely bright,” Nichols added.

Atalig began playing soccer when he was six years old, playing for Community First Dededo Soccer Club. He later moved to the Wings FC and eventually played for Guam on the island’s U13 Boys National team. Atalig received a scholarship to attend St. John’s School for high school and helped the Knights win back-to-back IIAAG Boys Soccer League championship titles his junior and senior years at the Tumon school.

“We at GFA are very proud of TJ and his accomplishments thus far,” said White, who also is GFA’s technical director. “TJ can only move up from here with the experience he will gain at the collegiate level. He is an excellent example of a player who has achieved what he has through hard work and persistence.” Atalig plans to leave Guam for Ohio in mid-August, he said. Currently, Atalig is training with the Guam U19 national team training squad preparing for the AFC U19 Championship qualifier later this year in Indonesia. 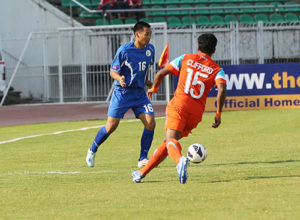 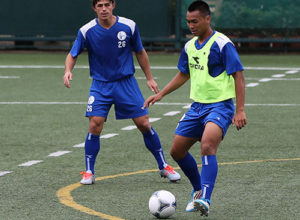 Guam’s Thaddeus Atalig (16) passes the ball facing defensive pressure from an opponent from India during the AFC Challenge Cup qualifier in Yangon, Myanmar in March 2013. Atalig recently accepted an athletic scholarship from Bowling Green State University in Ohio and will play soccer for the Falcons this fall. 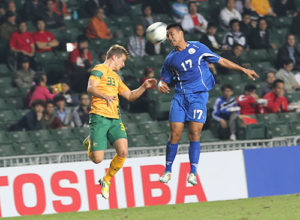